MSNBC has some truly devastating news for GOP presidential contenders Sens. Marco Rubio and Ted Cruz: according to impartial ethnic arbiter Chris Matthews, neither of them are Hispanic.

The Hardball host refused to identify either of the Cuban-American statesmen as such, instead opting for the awkward “Spanish surname” and factually incorrect “Cuban national.” The de-Latinification, de-Americanization, and sometimes outright minstrelization of Cuban Americans by liberal media personalities in general and NBC in particular is nothing new. Matthews’ remarks serve as a reminder that there exists a double standard in how liberal media treats Cuban Americans versus the majority Mexican – and majority Democrat – Latino population in the United States.

For context, Matthews was discussing the current dispute between the two presidential contenders over immigration when he attempted to ask a question to his guest regarding the possible relationship between attitudes towards Latin American immigration and being Latin American oneself, or not.

So you’re trying to insinuate that Marco Rubio, a fellow, uh, Spanish surname, I’m not sure the right word is Hispanic for them, because they are Cuban nationals or whatever, or come from Cuba. But, uh, is he going to insinuate that he is still basically for what he calls amnesty?

Let’s begin with what Matthews gets right: both “Rubio” (meaning “blond”) and “Cruz” (meaning “cross”) are, in fact, Spanish surnames. That is about where the factually correct statements end. Neither Sen. Cruz nor Sen. Rubio are Cuban nationals, as both are American. More importantly, Cuban ethnicity is inextricably linked with Latino identity, whether you are a Spanish-surnamed Cuban like the aforementioned senators, an English-surnamed Cuban like MSNBC anchor José Díaz-Balart, or a French-surnamed Cuban like yours truly.

Unlike its non-Hispanic neighbors Jamaica and Haiti, Spain colonized Cuba following its discovery of the New World. Today’s Cuban Americans are largely descendants of Spaniards and west Africans. Their ancestors spoke Spanish and, in many instances, they do, too.

No one serious contends the classification of Cubans as Hispanic/Latino. The New York Times, on the other hand, has published editorials decrying “Cuban privilege” and dismissing Cuban Americans in the U.S. Senate as too “white” to be Latino.

MSNBC has never gone that far. But it has certainly questioned or mocked more about Cruz’s and Rubio’s backgrounds than that of any other Latino politicians.

In 2011, for example, Ed Schultz accused Florida-born Sen. Rubio of being “not a real American,” in thin-coded racist language that implied that anyone whose family arrived in the United States after World War II could not consider themselves American. He said this before calling Rubio “not a real American,” ostensibly for declining an invite to The Ed Show:

I want to tell you, Mr. Rubio, that my parents went through the Depression, and my parents did the World War II thing. My parents lived in the unselfish generation, and for you to say that they were lesser Americans because they were involved in Social Security and Medicare and Medicaid, you owe my family at least an apology.

MSNBC has come a long way since the days they let Ed Schultz define the network. The pendulum appears to have swung the other way when Sen. Ted Cruz appeared on the network four years later and Mark Halperin stopped short of demanding a Ricky Ricardo impression from him, asking questions like “Your last name is Cruz and you’re from Texas. Just based on that, should you have appeal to Hispanic voters?” and demanding Cruz greet Senator Bernie Sanders, who had just entered the presidential race, in Spanish. Halperin later apologized for the embarrassing display.

MSNBC also entertained a conspiracy theory pushed by Washington Post‘s Manuel Roig-Franzia that Sen. Rubio’s family were not Cuban exiles, but immigrants, because they left Cuba in 1956, three years after Fidel Castro’s first terrorist attack on the Moncada barracks and deep into the decline of Batista-era Cuba into political chaos. Anything short of 1959, the year Batista actually fled, apparently doesn’t count despite well-documented presidential assassination attempts, terrorist acts, and political turmoil. At the time, Chris Matthews called Rubio’s life story a “ruse to make him look like a real anti-commie.”

Taken out of context, one could forgive MSNBC for ethnic insensibility. After all, before Díaz-Balart – who has distinguished himself among his peers for being willing to challenge false propaganda narratives on air – MSNBC was not exactly Versailles, and having a majority-white staff often leads to racial missteps, a common problem among liberal organizations. But NBC reporters have not only disrespected Cuban Americans through repeated questioning of their identity, they have actively promoted the Castro regime’s oppression on the island.

Take 2007, for example, when Andrea Mitchell and Matt Lauer took a trip to the island to promote a Castro-sponsored “tourism fair.” The two bantered over whether it was fair for Cuban Americans to hope to one day see the billions in property stolen from them during the Revolution (Castro owes American citizens alone $7 billion). In 2012, Mitchell returned to Cuba, calling its dilapidated health care system “truly amazing” and promoting the nation’s medical slave trade. She was back this January to praise the Obama administration for its numerous concessions to the Castro regime in December.

Nor are the hits against Cuban Americans at the network limited to their political coverage. Take this minstrel act from Saturday Night Live‘s Taran Killam, portraying Sen. Rubio as a sweaty, open-shirted, hypersexualized Latino heartthrob. Or SNL’s take on President Obama’s concessions to Cuba: a Cuban tourism promotion video hosted by actors playing Cuban-American artists who have stated they will not return to Cuba so long as the Castros remain in power, Gloria Estefan and Pitbull.

During a week in which the academic left has challenged Americans to decry racism wherever they may find it, the silence among liberals over years of discriminatory statements against Cuban Americans in national news and entertainment is deafening. Matthews’ remark is just the latest, and on his attitude, we Cubans couldn’t have put it better ourselves: 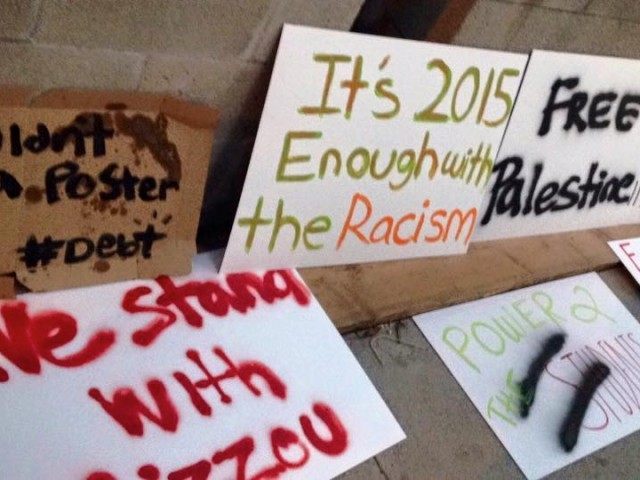