Shaun King, the Black Lives Matter leader who accepted an Oprah Winfrey scholarship to historically black Morehouse College and who claimed to be biracial until a Breitbart report forced him to admit he does not know his own ethnicity, is asking via his speaking agent for $7,500, plus travel, hotel and expenses, for public appearances.

King, who is embroiled in multiple financial scandals, makes a show of speaking for free to universities and colleges. But an email to King from an undercover reporter posing as one of the organisers of “Thinking Gender 2016” was forwarded by King to his speaking agents at The Lavin Agency, who quoted $7,500, plus travel and accommodation, for King to speak about social justice. 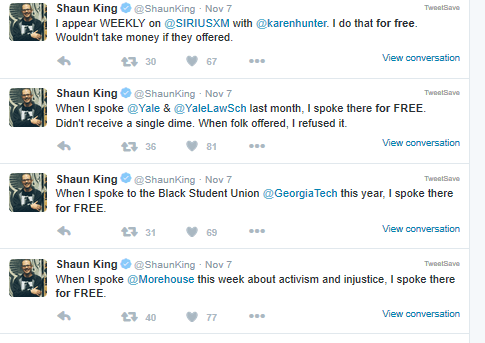 “Shaun’s basic fee for a standard keynote/QA is 7,500 plus travel, hotel and expenses,” the reporter was told by sales agent Holly Caracappa. The same agency quotes $50,000 for Atlantic journalist Ta-Nehisi Coates. The agency did not respond when Breitbart asked how much Deray Mckesson, also understood to be on its books, demands for his public appearances.

Black activists and members of Black Lives Matter penned an open letter to Shaun King earlier this month “taking him to task for suddenly shutting down the organization and for refusing to provide transparency for donations and spending.”

Given that so much of King’s personal story has unravelled on close inspection and how many allegations of financial impropriety surround the former Facebook pastor, conference organisers will be wondering what, precisely, they can expect to get for that kind of money – and what credible expertise King can bring to the table.

Known best for race-baiting antics on Twitter, what King thought he could contribute to a conference on gender studies remains a mystery. Though it demonstrates that a certain sort of delegate doesn’t mind what or who they’re listening to, provided the speaker has the right kind of politics. And, of course, that there’s no shortage of money for these kinds of speakers.

Asked for comment via email, Shaun King replied in the third person: “Shaun has not been paid for a single speaking engagement since the murder of Mike Brown.” He directed Breitbart to a self-penned blog post, also written in the third person, that goes further in claiming that King has “turned down every single offer to be paid to speak publicly about… American injustice.”

Asked to explain why, if he turns down offers of money, he nonetheless put a reporter in touch with his speaking agent, who quoted a $7,500 fee, King stopped responding to our enquiries.