Pollster Frank Luntz has been instrumental in shaping the political career of young Marco Rubio, raising grave concerns about Fox News’ decision not to disclose that relationship before Luntz showcased an extraordinarily pro-Rubio focus-group after Thursday night’s Republican debate.

Breitbart News has learned from a high-level former elected Florida Republican that Luntz crafted Rubio’s messaging efforts when he was a rising state legislator in the Sunshine State a decade ago.

Luntz was paid to guide Rubio’s transition into a statewide political role and he even helped to fashion the famous “American Exceptionalism” speech that vaulted Rubio to national prominence, spending much face-time with the young lawmaker in the process.

Luntz took up a block of time on Fox News immediately after the debate Thursday night to show how his hand-picked focus-group declared Rubio the winner of the Donald Trump-free debate.

Luntz’s post-debate focus group was so skewed in favor of Rubio it was jarring.

“Megyn, you asked probably the toughest question of the debate. You gave the candidates no room to wiggle. You pressed him. And he responded,” Luntz gushed to Megyn Kelly, awkwardly referring only to Rubio before even mentioning him by name. “I want to begin with the most important and impactful moment of this debate. It was your challenge of Marco Rubio. And watch how well he did on immigration.”

The focus group, featuring what were advertised as ordinary Americans, delivered a theatrical love-letter to the junior senator from Florida.

Luntz notably did not reveal the names of the participants in the focus group, such as one young man who described Rubio as “aspirational,” leaving journalists unable to ask for additional comments from the pro-Rubio participants. 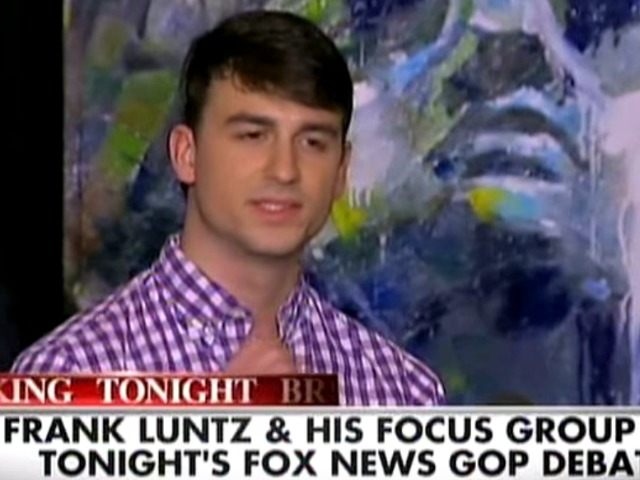 Breitbart News reported Friday that Luntz was paid to help Rubio with his 2006 long-form document “100 Innovative Ideas For Florida’s Future.”

But the Rubio-Luntz relationship goes much deeper.

A high-level former elected Florida Republican told Breitbart News that Luntz worked closely over the summer of 2006 with Rubio’s twelve-person leadership team to prepare Rubio for his new elected role as Speaker of the Florida House of Representatives.

Luntz held a series of focus groups in Orlando, and showed people tapes of the thirtysomething legislator. Rubio and his aides would also sit in on some of the sessions, presenting bits of speeches to the focus group participants and also learning firsthand from their observations.

The meetings helped Rubio to write his book, but they also helped him to deliver his “American Exceptionalism” speech that Rubio finally trotted out before a national audience when he accepted victory in his November 2010 Senate race in Florida. Rubio has subsequently returned to themes from that speech in many of his public statements.

Luntz was hired by Rubio’s team, but the insider did not remember whether Luntz was paid by Rubio personally or by the Republican House leadership organization in Florida, which Rubio at the time controlled.

The Rubio campaign did not provide comment for this report. A call to Luntz’s office was fruitless, as the pollster was in Iowa Friday. Luntz did not return an interview request on social media. But he did scoff any any suggestion that his panel was rigged.

So, why didn’t my focus group pick Rubio as the winner of any previous #GOPDebate?