Read the full article here — it’s really worth your time! — and here for your convenience, we have 13 facts about the Trump campaign revealed in the piece.

1. Years before he announced his candidacy, Trump had a former aide listen to talk radio to discover what issues Americans cared about most.

“I listened to thousands of hours of talk radio, and he was getting reports from me,” [Sam] Nunberg recalled. What those reports said was that the GOP base was frothing over a handful of issues including immigration, Obamacare, and Common Core. While Jeb Bush talked about crossing the border as an “act of love,” Trump was thinking about how high to build his wall.

2. That former aide says he first met Trump when he was a child at a WWE (then WWF) event.

Nunberg is a lawyer wired into right-wing politics who has long looked up to “Mr. Trump,” as he calls him. “I first met him at Wrestle­Mania when I was like 5 years old,” Nunberg told me.

3. As other candidates have dropped out, the team adds sad pictures of them to a “Wall of Shame.”

It was also thanks to some information he had gathered that Trump was able to do something that no other Republican has done before: take on Fox News. An odd bit of coincidence had given him a card to play against Fox founder Roger Ailes. In 2014, I published a biography of Ailes, which upset the famously paranoid executive. Several months before it landed in stores, Ailes fired his longtime PR adviser Brian Lewis, accusing him of being a source. During Lewis’s severance negotiations, Lewis hired Judd Burstein, a powerhouse litigator, and claimed he had “bombs” that would destroy Ailes and Fox News. That’s when Trump got involved.

Fox paid Lewis millions to go away quietly, and Trump, I’m told, learned everything Lewis had planned to leak. If Ailes ever truly went to war against Trump, Trump would have the arsenal to launch a retaliatory strike.

5. It’s well known that Trump lost business over his controversial campaign, but his daughter Ivanka has, too. 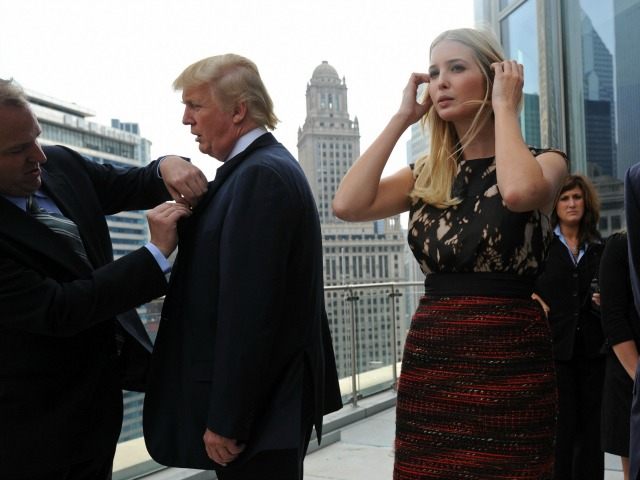 Trump with his daughter Ivanka arrive for a press conference at the Trump International Hotel and Tower in Chicago on September 24, 2008. (Amanda Rivkin/AFP/Getty Images)

Ivanka, Trump’s 34-year-old daughter, had carefully tended her public image as the softer, more refined face of the Trump empire. Now her father’s hard-edged nativist rhetoric risked damaging not only her brand but her business. A few days after the announcement speech, Ivanka received a terse email from Kimberly Grant, the CEO of ThinkFood Group, the holding company behind celebrity chef José Andrés, whose restaurant was supposed to be the anchor tenant in one of Ivanka’s biggest projects: the $200 million redevelopment of the Old Post Office in Washington, D.C., into a luxury hotel.

Ivanka did her best to salvage the partnership. She asked her father to issue an apology, even submitting several drafts for him to release to the press. But he refused. “Rapists are coming into the country! You know I was right,” Trump later told me.

On July 8, Andrés backed out of the restaurant deal, citing Trump’s immigration comments. The two sides are now battling in court.

6. Ivanka is also the person who talked her father into voicing support for Planned Parenthood.

She managed to persuade him to support Planned Parenthood—at least the part of the organization that doesn’t provide abortions—an extreme position for a Republican to take. “She’s very much into the concept of women’s health issues,” Trump said. (He no doubt embarrassed her last week by saying that women should be punished for getting abortions if the procedure were outlawed, a position held by almost no one even in the pro-life community, and one Trump recanted several hours later.)

7. Sherman says not even Trump himself expected to become the frontrunner at first.

[T]he cornerstones of Trump’s strategy are stadium rallies and his ubiquitous presence on television and social media. “Mr. Trump is the star,” Hicks said.

Pundits have scoffed at this. Trump has no “ground game,” they say. His refusal to spend money on television ads spells disaster. But from the beginning, Trump knew he was onto something. “I remember I had one event in New Hampshire right next to Bush,” Trump told me. “I had 4,500 people, many people standing outside in the cold. Bush had 67 people! Right next door! And I said, ‘Why is he going to win?’ ”

When he launched his campaign, Trump suspected it would eventually fizzle and he would return to The Apprentice. “You know, when I first got into this, it was for other reasons,” he told a friend. As weeks and then months passed with him remaining out front, he began to think winning the nomination was a real possibility, even as he resisted calls to professionalize his campaign. Why bother, when what he was doing was working so well?

8. It took the Trump campaign three minutes, by their count, to respond to Pope Francis’s statement that true Christians don’t want border walls.

The small scale and near-constant proximity mean they can respond to events quickly. In February, when the pope suggested Trump might not be a Christian owing to his plan to build a wall along the border, the campaign struck back within minutes. “If and when the Vatican is attacked by isis, which as everyone knows is isis’s ultimate trophy, I can promise you that the pope would have only wished and prayed that Donald Trump would have been president,” his statement said. Lewandowski recalled how it happened: “We found out about it as Mr. Trump was giving a speech on Kiawah Island in South Carolina, and within three minutes or less, he provided the response to Hope.”

9. Trump’s relationship with Sen. Jeff Sessions is closer than we all thought. 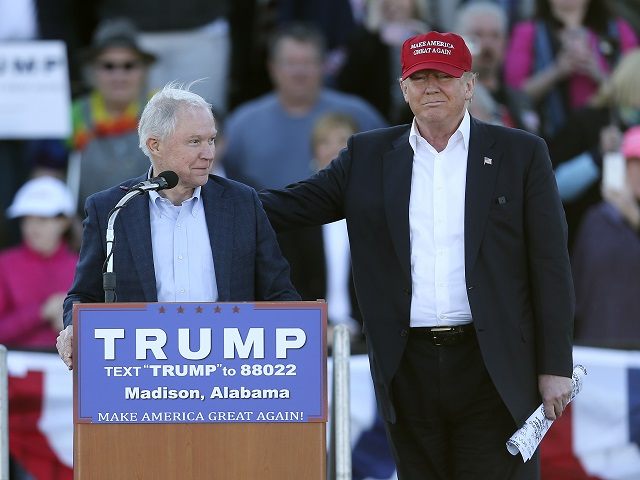 Trump, right, stands next to Sen. Sessions, as Sessions speaks during a rally Sunday, Feb. 28, 2016, in Madison, Ala. (AP Photo/John Bazemore)

A conservative source close to the campaign told me that Trump only truly consults one person, Alabama Republican senator Jeff Sessions: “When Jeff Sessions calls, Trump listens.” It’s hard to overstate Sessions’s influence on trade and immigration policy within the GOP. As far back as 2007, Sessions led the right-wing revolt to scuttle comprehensive immigration reform. Trump set out to win his endorsement early, calling him shortly after he launched his campaign and asking him to advise him. Then, while in D.C. for the anti-Iran-nuclear-deal protest in September, he met privately with Sessions in the basement of the Capitol. “That was a very long meeting,” recalled Stephen Miller, then an adviser to Sessions. “They discussed immigration, taxes, welfare, the Supreme Court, and entitlements.”

Since then, Trump and Sessions seem only to have grown closer. Sessions stood with Trump onstage near Huntsville just before the Alabama primary in late February. And when Sessions called Trump last month and criticized him for coming out in favor of H-1B visas, which allow companies to recruit high-level talent abroad, Trump promptly changed his position. “Sessions has told him to get off the personal attacks,” the source told me. “He says, you’ve got a policy position that’s resonating with the country, just stay on illegal immigration.”

10. Trump’s campaign has less than 1/8th of the national staff that Hillary Clinton does.

Trump’s campaign employs a core team of about a dozen people; his campaign lists 94 people on the payroll nationwide, according to the latest Federal Election Commission filing (Hillary Clinton has 765).

11. The Trump campaign claims to have built a millions-strong email list at virtually no cost just by requiring registration from rally attendees. 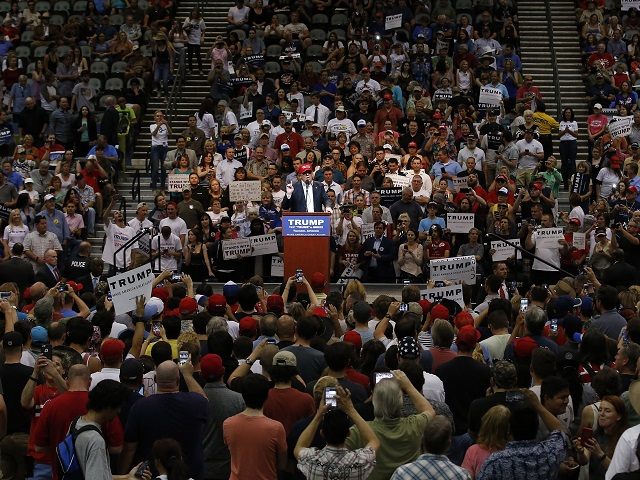 After the rallies, Trump makes sure his fans stay mobilized. Everyone who attends a rally has to register by email, and the campaign uses this list, which Lewandowski estimates is “in the millions at this point,” to turn out voters. Most campaigns spend a lot of money to acquire voter lists; Trump largely built his own. “If you look at what the Obama campaign achieved many years ago, they were successful at bringing new people in, and then communicating with those people. What we’re doing is not dissimilar,” Lewandowski explained. “He had a brilliant plan, which was to go in and attract huge crowds,” added Ed McMullen, Trump’s South Carolina co-chair. “We had extremely strong interaction with them, and we were dedicated to keeping track of who those people were.” Trump supporters receive frequent email updates and phone calls from phone-bank volunteers.

12. Trump often writes his infamous Instagram ads and has one employee produce them for almost nothing.

He buys few ads, and when he does, he likes to write them himself.

Trump has aired only six unique TV commercials, according to Hicks, while his GOP rivals have aired more than two dozen separate ads each. Through February, he spent only $10 million on ads; Jeb Bush spent $82 million. Trump relies mostly on essentially free Instagram spots produced by 29-year-old Justin McConney, the son of Trump’s corporate comptroller, whom Trump put in charge of building his social-media profile a few years ago. (One ad he made that featured Hillary barking and Putin laughing got a ton of — free — press.)

13. Trump has been wearing a bulletproof vest to his rallies for the past few months, Sherman claims.

People who know Trump say they’ve never seen him so tired. Several months ago, he began wearing a bulletproof vest, two sources close to the campaign told me, which has added to his discomfort on the stump, leaving him sweaty and spent after events.

For more information on Trump, his campaign manager Corey Lewandowski, his press secretary Hope Hicks, and his preparations for a possible contested convention, read the rest of the article here.