ABC News has updated its estimate of the current delegate totals in the Republican presidential primary, putting Donald Trump closer to the nomination than first thought after Tuesday night’s sweep of five states.

Reporter Ryan Struyk said on Twitter that the new numbers came from calls placed to every unbound delegate to gauge their support for Trump plus rivals Ted Cruz and John Kasich.

CBS delegate estimate: Trump now 288 delegates away from hitting 1237 – needs to win 45% of all the delegates remaining.

While Struyk has not yet posted an article on this development, the ABC News election coverage home page already shows the updated figures. 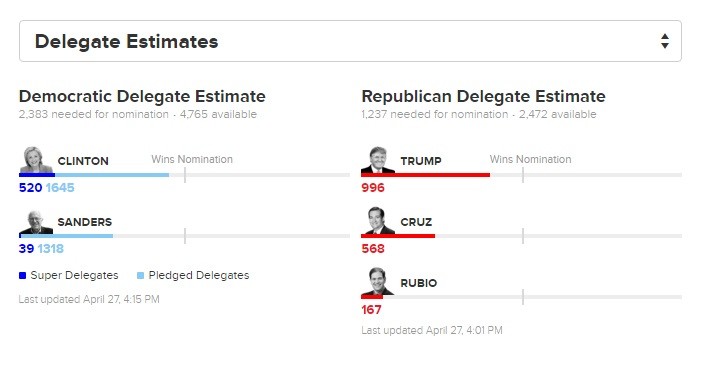 Earlier Thursday afternoon, Nate Cohn at the New York Times posted analysis with a similar conclusion — that Trump has a path to the nomination even if he loses the Indiana primary.

The main reason is Mr. Trump’s success on Tuesday among Pennsylvania’s 54 unpledged delegates. Even though none of them are officially bound to a candidate, 31 of the 54 spots went to delegates preferred by Mr. Trump. And before the election, others had said they would vote for the winner of their district (Mr. Trump won all of the state’s districts). My colleague Jeremy W. Peters reported that Mr. Trump “appeared to have won about 40 of Pennsylvania’s 54 unbound delegates.”

If he has indeed moved many of those delegates off the sideline and into his territory, it obviates the necessity for him to win Indiana, which is worth 57 delegates (30 delegates to the statewide winner and three delegates to the winner of each of nine congressional districts). He would still need a comfortable victory in California — enough to win about 130 of the state’s 172 delegates in the event of a loss in Indiana. He could bring that figure as low as 115 with good outcomes in West Virginia, Oregon, Washington and New Mexico, or with a few additional districts in Indiana.