A confident Donald Trump spoke at the California Republican convention Friday, calling for party unity and predicting he will win the nomination easily.

While Trump was speaking inside, progressive protesters burned his image in effigy outside and blocked him from entering the venue—forcing him to abandon his motorcade on the way in.

The businessman made light of the fact that he had to exit the street and climb over a barricade to enter the building. “That was not the easiest entrance I have ever had. I felt like I was crossing the border,” Trump said. “I went through dirt and mud and under fences. You all went through the lobby, I went under fences. I am just trying to dust off the dirt.”

Trump seems increasingly sure he will win the nomination on the first ballot by winning a majority of the delegates before the Republican Convention in Cleveland. “As of today, we have 1,001 [delegates]. We just broke the thousand mark,” he said. “We are going to close this thing out soon, now that we cracked the 1,000 mark.” 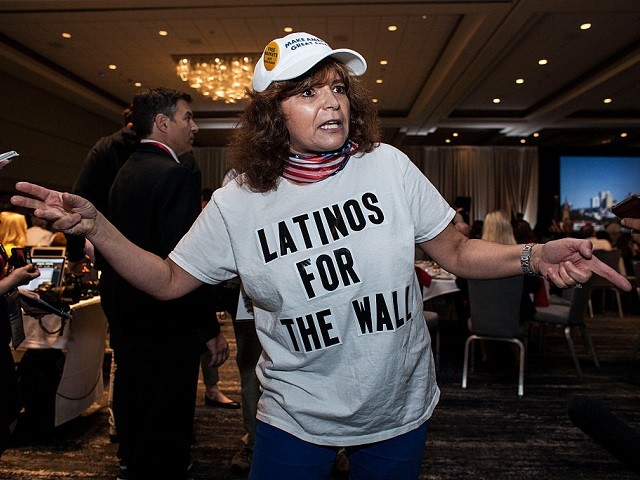 Republican presidential candidate Donald Trump supporter Luisa Aranda speaks with members of the press during the California Republican Party Convention on April 29, 2016 in Burlingame, California. Trump is preparing for the California Primary on June 7. (Photo by Ramin Talaie/Getty Images)

As the speech progressed, Trump teased his chief competitor Sen. Ted Cruz for choosing Carly Fiorina as his vice presidential candidate. “When she left, she had no votes,” he quipped. Trump also got in a jab at “low energy” Jeb Bush and did an impression of his youngest son to mock Governor John Kasich’s eating habits. “My little boy Barron said, ‘Daddy, that’s disgusting.’”

The business mogul went on to tout his endorsement from the National Border Patrol Council and Sheriff Joe Arpaio. Mr. Trump also touched on many of his hallmark issues, including trade and immigration.