Retail giant Target is losing sales and may be on track for another major stock-drop in the second quarter, analysts say, amid a growing boycott caused by the company’s transgender friendly policies.

The company’s second-quarter sales, from April to June, may drop as much as 2 percent compared to the prior year, executives told reporters and Wall Street analysts. That’s “horrendous,” said Jim Cramer, founder of the stock-market website, TheStreet.com.

The earnings prediction comes a month after the left-leaning company announced April 19 that it would allow men claiming to be women to use the women’s bathrooms and changing rooms at its stores. The decision has sparked a boycott petition effort that garnered over 1.2 million signers in only a week.

Target executives deny the pro-family consumer boycott is making a significant difference. But, according to TheStreet.com, the business-news website,

“We have seen a noticeable slowdown post-Easter,” Target CFO [chief financial officer] Cathy Smith said on a call with reporters. Target’s CEO Brian Cornell, who was also on the call, blamed the slowdown on unfavorable weather trends in the Northeast and volatile economic trends.

Cornell also said the company has not seen a “material” impact to its overall business from the protests, but has seen some hit to sales in a “handful” of stores. He declined to quantify the extent of the hit, however.

According to the Associated Press, Target expected a sales growth in new stores to hit 1.6 percent in the first quarter, but only realized a 1.2 percent growth.

This week, the company announced a reshuffle in the executive office.

Stock-pickers are getting nervous about the company’s executives. “Target is now a question… because the degredation of Target from month to month to month has them confused,” said Jim Cramer, founder of TheStreet.com. “Apparel [sales] is not good, electronics is not good, the [earnings] guidance is horrendous,” he said.

Amid Target’s troubles, Costco and the Walmart company will likely gain, he said.

Target’s stock has fallen 20 percent — from $84 per share to $67 per share — since it imposed the pro-transgender policy on its customer base of families.  That loss has chopped roughly $10 billion from the overall shareholder value of the company, according to a chart produced by Yahoo.com 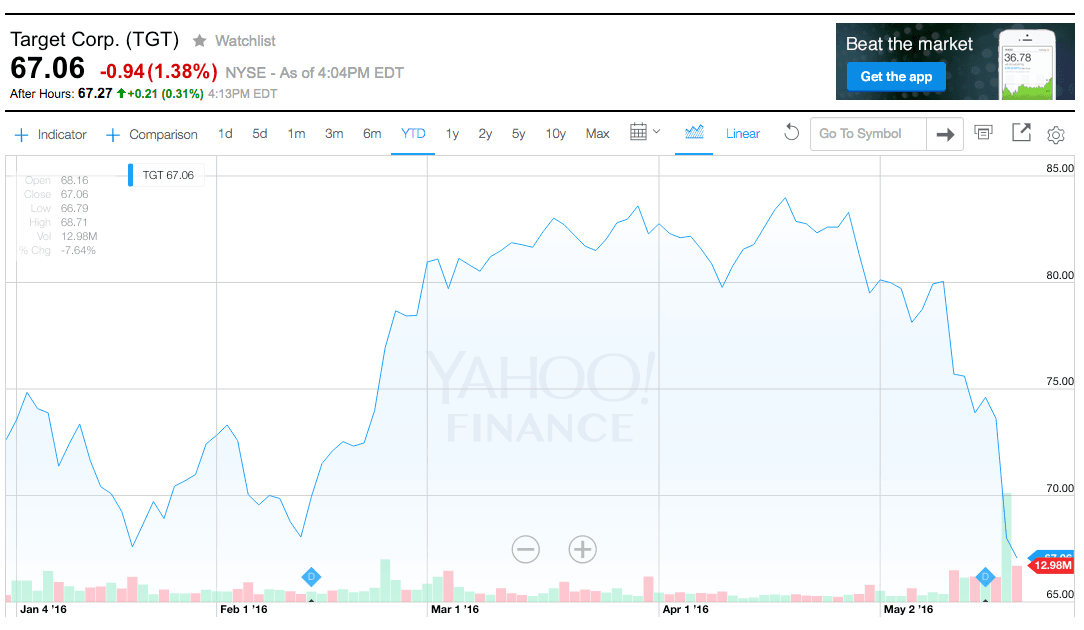 The AP notes that Target isn’t the only retailer to see a drop in profits with Nordstrom, T.J. Maxx, Walmart, J.C. Penny, Khol’s and Macy’s all seeing a downturn as Obama’s economy continues to struggle. But with the added pressure of the boycott movement, target’s fall has been worse than its rivals.