Trump’s labor and immigration policies are “strongly” backed by an average 32 percent of the respondents, and are “somewhat” supported by another 25 percent. That is an average support of almost 60 percent, versus strong opposition of just 15 percent. Roughly 10 percent did not answer the questions.

Ipsos is a highly rated polling firm, but conducted the poll in September and hid the pro-Trump answers until Nov. 16, a week after the election.

The poll shows the “strong support” and “somewhat support” numbers for various policies. That is important because those details help explain Americans’ contradictory desire to help their kids and also help foreign migrants. The “strong” and “somewhat” numbers also show how many Americans might take action if a controversial policy is implemented or cancelled.

Sixty-seven percent of respondents support, and only 9 percent strongly oppose, the implementation of current laws that levy fines on employers who hired illegals instead of Americans. Those laws were largely ignored by President Barack Obama and President George W. Bush.

The poll shows that Trump’s revised plans to minimize the danger of immigrant Islamic terrorism is backed by 59 percent, and strongly opposed by 12 percent. That result echoes the public’s strong opposition to Islamic doctrines.

On the campaign trail, Trump called for a two-year pause in legal immigration. “I think for a period of a year to two years we have to look back and we have to see, just to answer the second part of your question, where we are, where we stand, what’s going on …  I’d say a minimum of one year, maybe two years,” he said in March 2016.

Any significant reduction in immigration would raise Americans’ salaries and wages, cut welfare spending, reduce housing costs and drop unemployment, according to recent studies by a Wall Street advisory group that backed Hillary Clinton, and by the National Academies of Sciences.

More importantly, a major reduction in immigration would force Democrats to give up their 20-year strategy of gaining political dominance by importing government-dependent poor workers and voters. Without a future wave of immigrant voters, Democrats would be forced to offer policies that are favored by a broad swath of ordinary blue-collar Americans — and the Democrats’ business allies would be forced to divert profits back into wages and training programs. 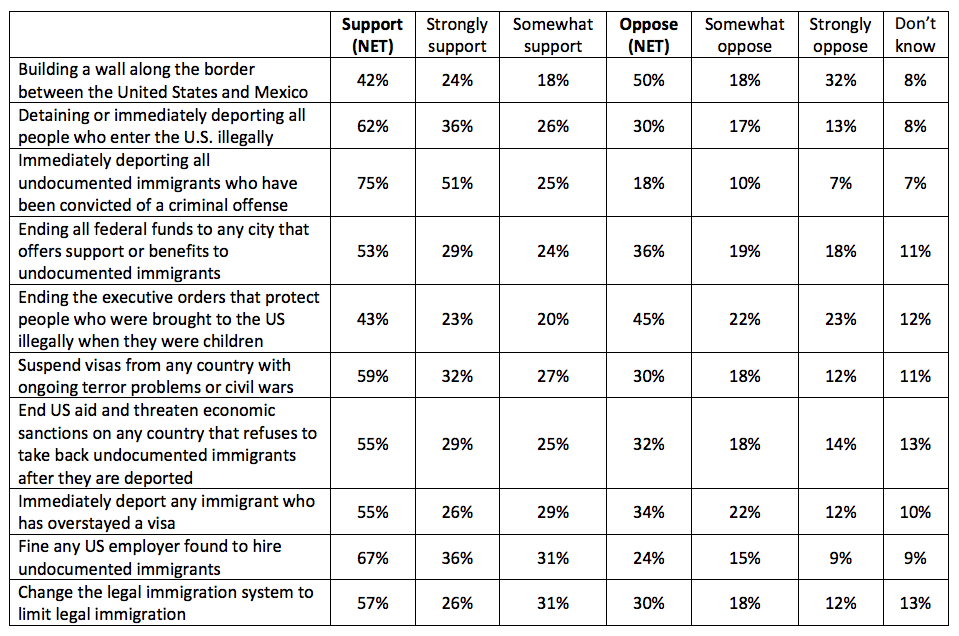 Many polls show that most Americans do like immigrants, and they want to be seen liking immigration — but they also want a reduction in the annual immigration of 1 million people, which cuts salaries for the 4 million Americans who enter the job market each year.

Prior to the election, Trump’s campaign manager recognized that Americans are far more likely to openly oppose immigration when they are asked if companies should be allowed to hire immigrants instead of Americans.

This same outspoken response is also visible in a pre-election poll of the midwesterners who gave Trump his election-winning state victories, and of Latinos, who mostly prioritize the economy over additional immigration of their ethnic group. On Nov 8, “actual election results from counties with large Latino populations suggests that Trump probably did no worse than [Gov Mitt] Romney among Latinos, and probably did better,” said Harry Enten, a data analyst at Fivethirtyeight.com.

These disparate views of Americans are highlighted in the IPSOS poll by unusually strong opposition to Trump’s campaign-trail promise to extend the wall along the U.S.-Mexico border. Overall, 42 percent strongly or somewhat supported building a wall, while 32 percent strongly opposed a wall, said the poll.

But this response from the 1,005 adult respondents is likely influenced by party solidarity because it was conducted Sept. 1 to Sept. 2, 2016, during the political campaign where Trump’s main theme was construction of a border wall. That party solidarity could explain why so many Democrats disagree with Trump’s main campaign-trail promise to build a wall — but also support Trump’s lower-profile proposals to restrict the movement of illegal immigrants, such as a crackdown on employers that hire illegals.

But when the same question is asked without any reference to “children,” support for repatriations spikes and opposition crashes. Sixty-two percent support — and only 13 percent strongly oppose — “detaining or immediately deporting all people who enter the U.S. illegally.” That’s four-to-one support for enforcing immigration laws.

The public’s conflicting answers may also be caused by the poll’s lack of information about the scale and economic impact of current immigration.