The economically damaging boycott of Target “makes it easier for [other] company officials to address gay groups, transgender groups, and say ‘We have a responsibility to our shareholders and we do not want to anger our customer base, and so we’re not taking your side or the other side,’” in political fights, he told Breitbart News.

Vitagliano praised Breitbart’s self-defense against cereal-producer Kellogg’s, which recently announced it would join a progressive campaign to block Internet advertising on Breitbart’s news site. The progressive campaign is intended to get companies to restrict the free speech of mainstream political news companies, such as Breitbart, which do not comply with progressives’ ideological agendas. In response, Breitbart is urging Americans to deter corporate suppression of free-speech by joining the popular and effective boycott of Kellogg’s products.

“We applaud Breitbart’s boycott, support it wholeheartedly and encourage people to sign on to this important effort,” said the AFA.“Kellogg’s [is] a company that has surprisingly revealed itself to be a leftist corporation that scorns conservatives,” said the AFA.

In April 2016, Target said it would ban single-sex bathrooms and changing rooms, and would force its customers and employees to pretend that a person’s sex is decided not by biology, but by their wishes, or their self-declared “gender identity.” More than 1 million people quickly signed up with the AFA’s boycott to reject this identity-over-science “transgender ideology.”

The boycott is continuing, Vitagliano said. “What we’re hoping is that [boycott] pressure will continue to grow on Target in the holidays, and they’ll just have to make the concession [that] it was not a good idea,” he said.

The boycott was greatly aided by coverage in Breitbart, he added.  “Breitbart has been instrumental in helping the American Family Association get the word out about our immensely successful boycott of Target.” he said. 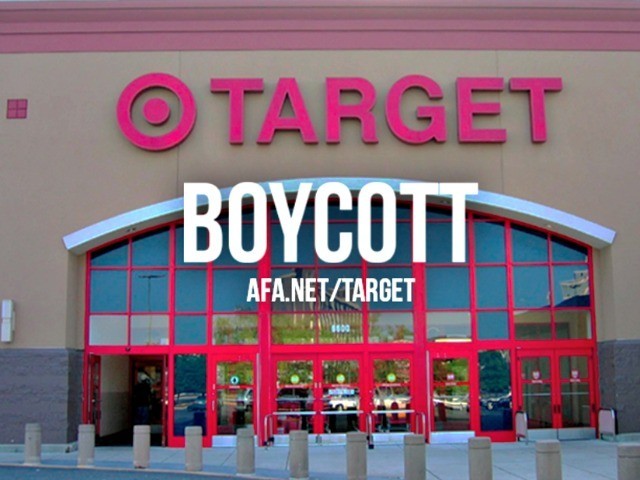 Since the boycott began, the company has responded by cutting prices, but market analysts predict the company will lag behind its rivals. For example, a series of market experts now predict the company’s stock will drift down to $75 dollars over the next year, keeping it almost $9 behind its pre-transgender peak of almost $84 in April 2016.

Target’s rivals have done better during 2016— Kohl’s stock value is up 10 percent, Amazon’s value is up 10 percent and WalMart is down only 5 percent. In the competitive, dog-eat-dog world of retail, Target is falling behind those rivals because its executives preferred to play transgender politics instead of giving their shareholders and customers what they wanted.

Ironically, Target has done best in the market segment where no dressing rooms are required — the online sector, where customers shop from their own homes.

With Target penalized by the AFA boycott, and other retail stores staying neutral, gay advocacy groups have relied on their allies in universities and Silicon Valley to push their pro-transgender, anti-heterosexuality campaign.

That pro-transgender campaign was inflicted on North Carolina in March, when the legislature overruled a decision by the city of Charlotte. The city had earlier voted to eliminate any recognition of the two sexes — male and female —when it passed an ordinance allowing people to use any public toilet, regardless of sex.

The gay groups, led by the Human Rights Council, worked quietly with President Barack Obama and Hillary Clinton to persuade their business allies to cancel sports events, entertainment events and even investments in the state. Obama also sent his Attorney General to sue the state for supposedly violating claimed legal rights of transgenders.

The state’s progressive media then blamed the gay-led economic boycott of the state on GOP Gov. Pat McCrory, who subsequently lost the 2016 election by just 10,000 votes.

That success for the gay groups, however, was offset by the shocking presidential election loss to Donald Trump’s pro-American populist coalition. Since then, Trump has nominated GOP Sen. Jeff Sessions to serve as his Attorney General, and he is likely to enforce existing privacy laws that protect men and women, boys and girls, in their bathrooms and restrooms.

Since the election, progressives and gay groups are begun trying to use their commercial allies to hurt mainstream media outlets, such as Breitbart, by claiming they’re selling “fake news.” The progressives are hoping that executives in Internet and advertising companies, such as Facebook and Google, will agree to gradually block the visibility and advertising of the increasingly popular mainstream publications. That campaign is designed to aid progressive media outlets, such as the New York Times and CBS, to regain control over the public’s political debates.

So far, more than 400,000 people have joined Breitbart’s boycott against Kellogg’s.

By participating in political conflicts, companies “put themselves in a very tough spot,” said Vitagliano. “When you pick a side in the culture wars, it is very difficult to extract yourself.”