The tale of the lynching of a black man in Pittsburgh back in 1899 has been used for decades to illustrate how bad the area was for minorities. But new research into the incident found that the story is a 117-year-old example of “fake news,” as it appears this famous “lynching” never actually occurred.

With the whole of the media wringing its hands over “fake news,” it is instructive to remember that the “news” media has for decades been less than serious in its search for the truth, often placing sensationalism above facts and indulging in lazy reporting.

Activists in the Pittsburgh, Pennsylvania area have used the “lynching” of African American fuel plant worker David Pierce as an example of the inequities heaped on minorities in the region for well over 100 years — a stain on the region’s history.

But as The Philadelphia Inquirer recently reported, when researchers at the Pittsburgh Post-Gazette began looking into the history of the lynching, the whole tale fell apart. Not only was there no black employee lynched, there wasn’t even a person named David Pierce — white or black — involved in the story.

The story passed down through the decades by activists centered on the “lynching” of R.J. Rainey Coke Company employee David Pierce, who was described in early stories as a “dangerous negro.”

On the morning of December 19, 1899, the story went, company superintendent Sanford White got between this “dangerous” Pierce and another employee as they engaged in a fist fight. Pierce drew a pistol from his pocket and fired, delivering a fatal wound to White’s abdomen. Pierce then ran into the woods, pursued by an angry mob that shot and lynched him once they caught up with him. 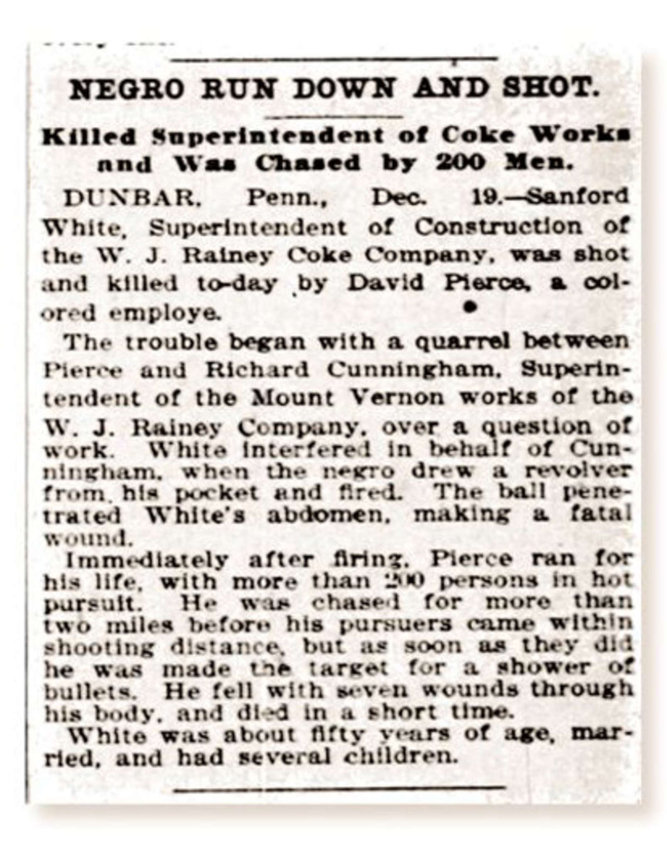 The above reporting on the incident was the earliest account of the fight and was picked up by newspapers across the country, causing a momentary sensation nationwide.

Consequently, this early version of the story was bandied about for decades as an example of illegal summary justice and unfairness blacks faced — so much so that researchers wanted to add the story to a modern compilation of outrages and lynchings visited upon African Americans. But when modern researchers began to track the actual facts, they revealed a different story.

Researchers discovered court records and other, more truthful newspaper accounts that confirmed the fight did happen. The pugilists turned out to be a black man named George Templeton and another company employee. Also, as the mythical tale insisted, a supervisor named Sanford White did try to break up the tussle and was shot and killed for his troubles. But from there things take a far different turn.

The fight began when Mr. Templeton (not “David Pierce”) was accused of robbing a man of $6 and a pocket watch, and during the argument Templeton pulled a pistol.

It was then supervisor White intervened, striking Templeton in the face while trying to disarm him. White was wounded during the struggle. At this point someone else picked up the gun and fired at Templeton, striking him in the neck as he ran away from the scene.

A group of citizens gave chase and Templeton was captured. But no one was lynched.

Furthermore, the black employee had his day in court. At trial Templeton pleaded self-defense and had his charges reduced, receiving only a 15-year prison sentence for killing Mr. White. In the end, the all- white, male jury decided that Templeton was guilty only of second-degree murder, so he was not given the death penalty or a life sentence.

Templeton served just over eight years, having received early release for good behavior, and then disappeared from the pages of history.

Researchers couldn’t find any David Pierce (or a Caleb Pierce, as some early reports named him) in the story at all.

So, the story of “the lynching of David Pierce” turns out to be a fraud. Furthermore, the real life black man in the story not only wasn’t lynched, but he had his day in court and even received a lesser sentence` because his plea of self-defense was accepted.

Still, despite what really happened, activists have been using this legend of the lynching of a non-existent black man as a rallying point for decades. And it is all based on a 117-year-old case of “fake news.”