A grim government report shows more than 500,000 Americans died from drug overdoses in only 15 years, and confirms that “the opioid overdose epidemic is worsening.”

“Heroin overdose death rates increased by 26 percent from 2013 to 2014 and have more than tripled since 2010,” says the January report from the U.S. Centers for Disease Control and Prevention.

More than 47,000 people died from drug-overdose deaths in 2014 alone, including 28,647 from opioids and heroin overdoses. Nearly all of the heroin used in the U.S. is brought across the border by Mexican traffickers, who are nearly always illegal aliens.

Heroin has become more plentiful in the illicit drug trade, and it is cheap compared to legal prescription pain killers, the CDC says. Potent batches of heroin “appear to be major drivers of the upward trend in heroin use and overdose.” 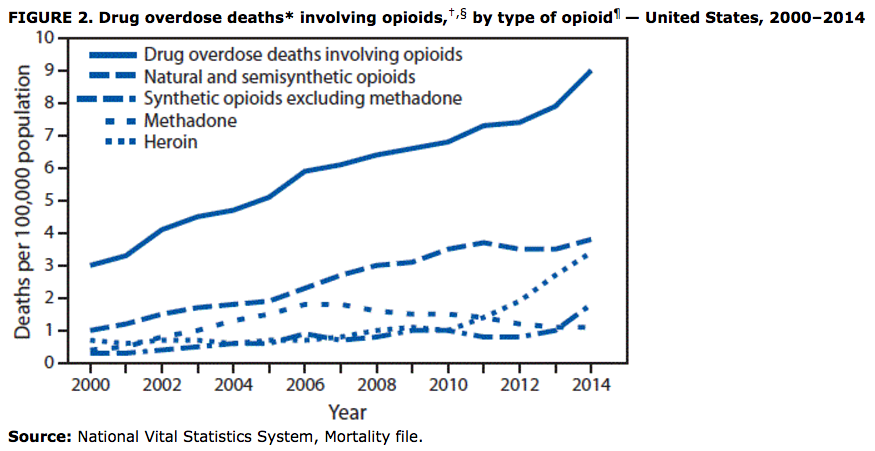 “In 2014, the five states with the highest rates of drug overdose deaths were West Virginia, New Mexico, New Hampshire, Kentucky, and Ohio,” according to the CDC.

West Virginia in particular is saturated with painkillers: Drug wholesalers poured 780 million hydrocodone and oxycodone pills into West Virginia in only six years, meaning there were 433 painkillers for every single person in a state with a population of only 1.84 million. During that time, 1,728 Americans in the state died from overdoses on those pain pills. The CDC says prescription opioid deaths have steadily increased while overdoses from illegal drugs have recently surged, especially due to heroin.

The easy availability of opioids has made the prescription-addiction-death spiral difficult to combat, according to the government.

“To reverse the epidemic of opioid drug overdose deaths and prevent opioid-related morbidity, efforts to improve safer prescribing of prescription opioids must be intensified,” the report continues. “Opioid pain reliever prescribing has quadrupled since 1999 and has increased in parallel with overdoses involving the most commonly used opioid pain relievers.”

One expert partly disagreed, drawing a line between illegal narcotics and prescription drugs: “It’s a heroin problem, not just an ‘opioid’ problem, as it’s sometimes half-disguised,” former federal prosecutor Bill Otis told Breitbart News in an email. “Over-prescription of opioids by pill-mill doctors is also a problem, to be sure, but the two should be shown as distinct.”

The increased death toll may also be shaped by President Barack Obama’s campaign to release more drug-dealers from prison.

“The increasing heroin deaths from 2010 to 2015 coincide exactly with the decline in the overall prison population during that period,” Otis said. “It was the first decline in the country’s prison population in decades. If people want to think that there is no relationship between putting convicted felons back on the street and increased drug crime, they can go ahead and think that.”

“But reality paints a different picture,” he continued. “A DOJ study under Eric Holder found that the rate of recidivism for drug offenders is a whopping 77 percent—and even that is an understatement, because drug crimes are notoriously under-reported.”

Otis labeled Obama’s unprecedented effort to reduce the sentences of drug traffickers, many of whom are armed convicts, as a signal to felons that they can continue to deal illicit narcotics.

I don’t know how many of Obama’s roughly 1,700 clemencies were specifically for heroin dealers; some were certain to have been. But the great majority were for dealers in hard drugs of one kind or another. Thus, what Obama gave us—and I hope [President Donald] Trump and Sessions will reverse—is the message that the cost of doing business in the drug trade will be going down at exactly the time that the damage (often lethal damage) to ordinary citizens stemming from drug use is going up.

Trump repeatedly declared that the U.S. must stop heroin from “poisoning our youth” on the campaign trail, releasing a policy paper detailing his plans to combat the drug epidemic in late October.