Pollsters found that 51 percent of respondents want the U.S. to accept fewer refugees than the 100,000 per year President Barack Obama wanted to import. Trump’s new White House plan trims that number to 50,000 per year.

Fifty-three percent of respondents also support the Trump’s Executive Order banning all refugee resettlement from Syria and freezing refugee resettlement for 120 days, according to the poll, which was conducted for the Harvard Center for American Political Studies by the Harris Poll company. The company is co-managed by Democratic pollster Mark Penn. Forty-seven percent of respondents oppose the new curbs, according to Harris, which did not release details showing the percentage of people who strong support or oppose the curbs. 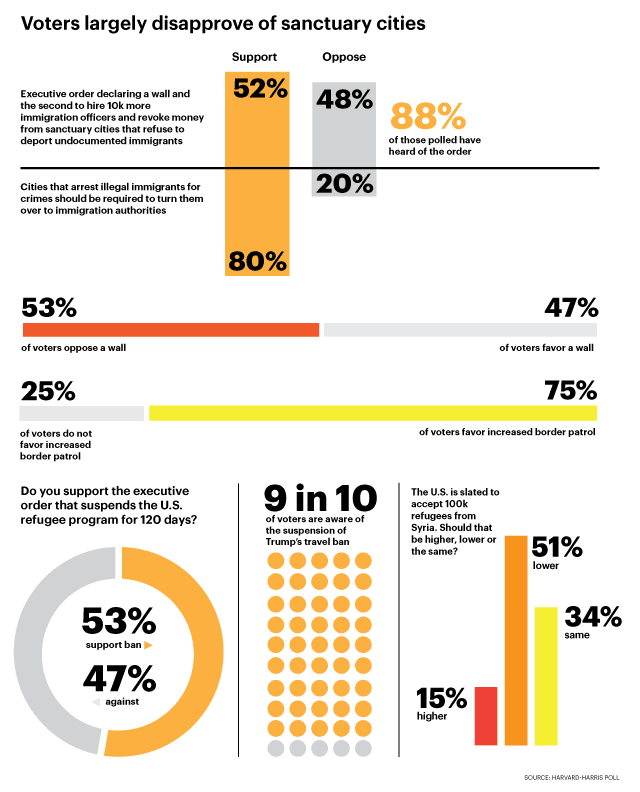 A regional judge’s order halting President Trump’s refugee resettlement freeze on Feb. 3 did not affect Trump’s halving of total refugee resettlement numbers. It did, however, lead to a rush of refugees from five of the seven unstable, terror-exporting countries into the U.S. Thanks in part to one regional judge, 60.1 percent of refugees arriving since the ruling are from Iran, Iraq, Somalia, Syria, and Sudan. Over half, or 55 percent, of the 2,576 refugee arrivals are Muslims, including 99.6 percent of Syrian refugees.

A total and complete shutdown of all refugee resettlement would save billions, but most of the refugees already living in the U.S. are an economic weight because they are only capable of low-skilled work. They will continue to cost more in welfare and aid than they generate in taxes, so costing American taxpayers at least $3 billion every year. These costs do not include any costs racked up in the U.S. criminal justice system when refugees commit crimes and plot terrorism.

A Rasmussen Reports poll released on Feb. 2 found 52 percent of voters favored a freeze on all refugee resettlement until the government could better screen out terrorists, including 57 percent of young voters.