House Speaker Paul Ryan has a critical choice to make in the next few days: Whether he will please company executives by allowing them to import more lower-wage H-2B visa workers, or else please the GOP’s base of blue-collar Americans by helping them get jobs at higher wages?

Business groups, led by the H2B Workforce Coalition, want him to include language in the 2017 supplemental budget which would allow companies to import another 100,000 or more lower-skill H-2B visa workers for summer work at low wages. The supplemental must be completed by April 28.

But pro-American groups want the number of visas kept at 66,000 for the year, which will force companies to raise wages and to recruit some of the millions of young Americans who have dropped out of the workforce.

The pro-American group thinks Ryan has decided to back blue-collar voters. “Speaker Ryan’s decision to exclude the H-2B returning worker exemption in the funding bill is a rejection of the business lobby’s desire for cheap labor and a signal that Americans will come first under the [Donald] Trump administration,” said a statement from the Federation for American Immigration Reform. The statement continues:

Speaker Ryan is showing he stands with American workers by refusing big business calls for more cheap labor. Keeping the H-2B worker exemption out of the government funding bill puts businesses on notice that Congress will no longer turn a blind eye to the harm mass immigration causes American workers.

In December,  Ryan decided to not include the “returning worker” exemption in the 2017 federal budget, after he supported it in the 2016 budget. The exemption in the 2016 budget allowed companies to exempt visas for new H-2B workers from the annual cap of 66,000 visas if those workers had been an H2-B worker in the previous three years. That “returning worker exemption” effectively boosted the annual size of the program from 66,000 up to a maximum of 264,000. If that exemption is reestablished for 2017, the H2-B inflow would be larger than the annual inflow of roughly 110,000 white-collar employees via the H-1B visa program, which is mostly used by information technology and medical industries.

Ryan’s retreat from the H-2B program is a notable change. He has long been an avid supporter of companies seeking to hire “any willing worker” from overseas in place of blue-collar Americans — but the resulting economic and civic damage to American communities allowed Trump to take over the GOP and get elected in 2016. However, aside from his H-2B turnabout, there’s little evidence that Ryan supports Trump’s successful populist campaign promise of lower immigration and higher wages.

On the other side of the debate, business groups say they can’t get needed workers, despite offering somewhat higher wages. They’re short of seasonal landscape workers, bricklayers, kitchen crews, hotel maids, foresters, and fish processors, and even trainees for those jobs, say company executives.

“We just don’t get applicants … [even thought] we do everything we can imagine” to recruit new season workers, said Glen Ellison, the owner of Ceres+, a landscaping and architecture company in Colorado. He offers his H-2B workers a starting wage of $15.11 an hour and U.S. workers even more. “Nobody wants to do the hard labor… I have hired every single high school kid that comes to my company,” he said.

There are too few vocational schools teaching skilled trades to teenagers as the older workers retire, and too few Americans are willing or even capable of manual outdoor work, say employers. Society grants little status to blue-collar skilled work, and provides too much long-term welfare for people who don’t want to work, employers say.

The problem is worsened by the federal government’s refusal to penalize companies who hire illegals to undercut companies which hire Americans, said Gary Woodworth, chief executive officer at Gallegos, a building company in Colorado. Such hiring is “prevalent,” said Woodworth, who opened a government-certified apprenticeship program and pays new employees $16.55 an hour, or $34,000 a year.

To sway Ryan and other legislators, company owners and executives from The H-2B Workforce Coalition flew into D.C. on Wednesday to lobby their members of Congress.  The executives also tailor their argument for GOP leaders, saying the H-2B workers support additional jobs for Americans and will go home at the end of each season, unlike illegal immigrants.

Business advocates have won partial support from roughly 40 House members, who asked agency officials in mid-March to minimize wastage in the distribution of the 66,000 2017 H-2B visas.  A similar letter was signed by 31 Senators, led by North Carolina Republican Sen. Thom Tillis, who strongly supported cheap-labor immigration programs when he was a state legislator.

More importantly, 53 House members signed a March 30 letter to leaders in the appropriations committee asking for the “Returning Worker Exemption” to be reestablished. The House signers include Republicans Barbara Comstock from Virginia, Kristi Noem from South Dakota, Elise Stefanik from New York, Thomas Massie from Kentucky, Barry Loudermilk from Georgia, and Tim Murphy from Pennsylvania.

Business requests to hire foreigners instead of Americans usually receive a warm welcome in the established media, such as the Wall Street Journal.

However, supporters of the visa workers programs know they are pushing a rock uphill after Trump’s shocking victory in November, which was powered by blue-collar voters eager for reductions in cheap-labor immigration. “Brave folks” are still willing to push for an amnesty and increased inflow of guest-workers, admitted Michele Stockwell, vice-president of public policy at the Bipartisan Policy Center, at a March 2 meeting.

Nationwide, “wages for the less-educated remain stagnant or in decline and well below what they were in 30 years ago,” despite company complaints, said Steven Camarota, the research director at the Center for Immigration Studies. That huge social and political problem will be solved if legislators let the domestic labor market work, as labor supply will rise to meet higher wages and better recruiting, he said.

For example, roughly 10 percent of American “prime age” men, or 7 million men aged 25 to 54, have stayed out of the nation’s workforce of 160 million amid the glut of cheap immigrant labor. The working-age Americans are not trying to get jobs, and are not participating in the nation’s labor force, largely because of low wage rates, according to an August statement by Jason Furman, the chief economic advisor to former President Barack Obama.

The glut of workers is worsened by the federal government’s immigration policy. Each year, four million Americans turn 18 and begin looking for good jobs in an increasingly automated economy. But the federal government annually imports one million new legal immigrants plus one million new contract workers — including the H-2Bs and H-1Bs — who are used by companies as cheap workers, as welfare-aided customers, and as urban and suburban renters.

However, there’s much anecdotal evidence that the growing economy — and the gradual reduction of illegal immigration — is forcing companies to solve their workforce problems by offering higher wages, by training unskilled workers and even by recruiting unemployed Americans in high-unemployment, drug-damaged rural counties.

The worker shortage has set off a “bidding war” for employees among Colorado landscaping companies, said Ellison.

“We’re starting to see people get more competitive” by offering higher hourly wages, said Jeff Seifried, president of the Chamber of Commerce in Branson, Mo. “We’re seeing a buck, $1.50, or sometimes $2 raises … [up to] the $11 plus range,” he said. The city’s seasonal employers need many people to clean hotel bedrooms, serve food and run entertainment facilities, but they can’t raise wages too high for fear of deterring bargain-minded middle-class customers, he said.

Each year, the city offsets wage pressure by importing roughly 1,000 H-2B and J-1 visa workers.  But the cap on visa workers is forcing the companies to raise wages, broaden recruitment campaigns, to improve roads and regional bus services so that seasonal workers can commute from longer distances. Some companies are even considering providing weekday housing for seasonal workers who do not wish to move permanently from their distant homes, Seifried said.

In Maine,  the Bangor Daily News recently reported that employers have started recruiting former convicts: “Johnson, of the Somerset Economic Development Corp., has observed felony records to be ‘one of the big barriers’ to employment for Maine men, though employers are starting to be more open to hiring people with criminal records in response to the workforce crunch.”

But the national data shows no significant wage growth for blue-collar workers: 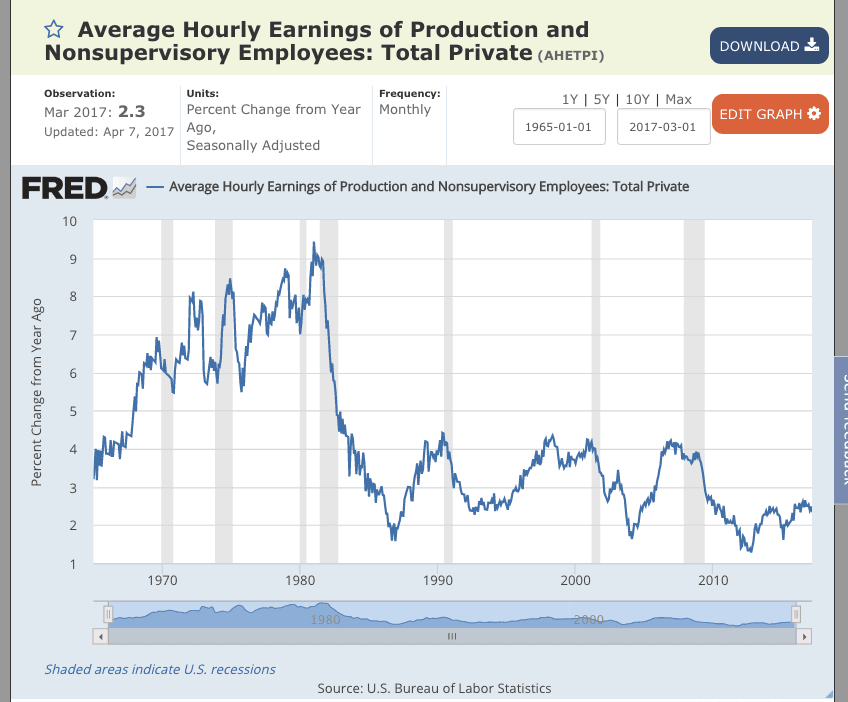 Politically, if GOP leaders reject business’ demands for more contract workers, “it would put the Democrats on the defensive because it would be a substantial and real way for [President Donald] Trump to be the champion of workers over employers,” said Camarota.

“One of the challenges in the U.S. economy is to draw back in the many people [who are] out of the workforce and one of the best ways to do that is to let wages rise,” he said. But, he warned, “it will take several years of strong wage growth to get them back to what they used to get paid, and even then they would be poor.” This year, he said 19 months before the 2018 election, “why not let their wages rise?”