For decades, Ann Coulter, fearless in her way, has ridden to the sound of the journalistic guns.  Whether the fight was about Bill Clinton’s impeachment, or George Bush’s Iraq war, or Barack Obama’s health insurance plan, she was always in the thick of the fray.  So a few days ago, when Coulter chose to go back in time, citing a work of political advocacy about a county in Michigan—written by Democrats, no less—that was attention-getting.

In her June 28 column, Coulter took note of a report released back in March by the Democracy Corps, a partisan political group co-founded by two veteran Democrats, pollster Stanley Greenberg and strategist James Carville.  The report studied voters in Macomb County, Michigan, just outside of Detroit, asking them about their attitudes toward President Trump.  As Coulter recounted the findings, the folks being focus-grouped showed themselves to be big fans of the President, brushing off most criticism of him.  And yet at the same time, they were not so high on some other leading Republicans:

They love Trump, have no regrets about their vote, disbelieve the media and detest career politicians like Paul Ryan and Mitch McConnell. They just “pray [Trump] keeps his promises and succeeds.”

And yet, Coulter continued, there was one aspect of the Trump administration that these Michiganders didn’t like—its Wall Street wing:

One fact, and one fact only, shook their faith: When they were told that his Cabinet was “full of campaign donors, Goldman Sachs bankers (bailed out by the taxpayers) and people who use undocumented workers in their homes.” Hearing that, these devoted Trump voters called him “two-faced,” a “puppet” and sadly remarked, “It’s going to be a lot of the same old garbage.”

Then Coulter jeeringly added her voice to the chorus of feelings that the Michiganders had expressed: “The geniuses of Goldman specialize in generating obscene salaries for themselves while helping send American jobs abroad.”

We must immediately say that one study conducted by Democrats is not the final word on anything concerning Republicans.  Indeed, it could be said that in its handling of some questions, the Democracy Corps was using the focus-group equivalent of push-polling.  Yet for her part, Coulter was obviously impressed by the findings; the next day, June 29, she tweeted about them:

Greenberg: “when shown photos of Paul Ryan & Mitch McConnell, ppl described them as ‘shifty’ ‘for the upper class.’”

And she included a link to the report.

However, lest anyone think that Coulter had turned soft on the Democrats, in a second tweet she added a hard punch against the 44th president:

Okay, if it’s going to get all this attention, maybe we should take a closer look at the actual Greenberg/Carville document.  What’s the fuss about?  Why is a report produced by strong Democrats getting so much play from a strong Republican?

The study, “Macomb County in the Age of Trump,” describes the results of the focus groups that led the authors to a distinctly glum conclusion about their party:  The Democrats don’t just have a problem with working-class whites, they have a problem with the working class, overall.

The 2016 election results—losses for Democrats across the board, reducing them to their lowest levels since the 1920s—would certainly seem to vindicate the Democracy Corps’ pessimism.  There are many reasons for this Democratic debacle, and we will explore them later in this series.

But in the meantime, here’s a question: Why Macomb County?  What led these big-league Democrats to that particular locale in Michigan?

Macomb is the third-largest county in the Wolverine State, behind Wayne County, which includes Detroit, and also behind another suburban county, Oakland.  In a state of 9.9 million, Macomb numbers 867,000, or almost a tenth of the population.

Yet size doesn’t justify Macomb’s special place in the political discourse.  In fact, it has a particularly interesting political history; that’s what has made it a magnet for political scientists and politicos.

Yet unlike most suburbs, Macomb wasn’t white collar but, rather, blue collar.  Indeed, thanks to the generous wage agreements won by the United Auto Workers, the blue collars who worked for the Big Three car companies could afford to live like white collars.  That is, these working stiffs, too, could afford their quarter-acre piece of the American Dream.

Yet because Macomb was blue collar, it was strongly Democratic.  The Democratic Party, after all, had given workers the Wagner Act, enacted in 1935 by Franklin D. Roosevelt and his fellow Democrats in Congress; that landmark legislation was commonly referred to as the “Magna Carta” of organized labor.

So, of course, Macomb was loyal to FDR’s memory and to his party.  In the 1960 presidential campaign, John F. Kennedy won almost 63 percent of the vote there.

In the meantime, Macomb has continued to grow: In the 2010 census, its population was tallied at 867,000.  Here we can pause to observe that Macomb still retains its gritty blue-collar vibe; the musicians Eminem and Kid Rock, for example, are both from Macomb, and they both still live in the area.

To further illustrate the special character of Macomb, we might compare it to the other big suburban county in Michigan, the aforementioned Oakland.  Oakland County is a more “traditional” suburb—that is, substantially white collar.  Indeed, it’s the most conspicuously affluent part of the state, home to leading auto executives; Mitt Romney, son of an auto CEO, grew up there.

As such, Oakland’s politics have always been different from Macomb’s.  In the 1960 presidential election, when Democrat JFK won Macomb by a monster margin, Oakland went the opposite way, giving most of its votes to Republican Richard Nixon.  Such diverging results are no surprise; after all, it’s rare that labor and management see eye-to-eye on much of anything. 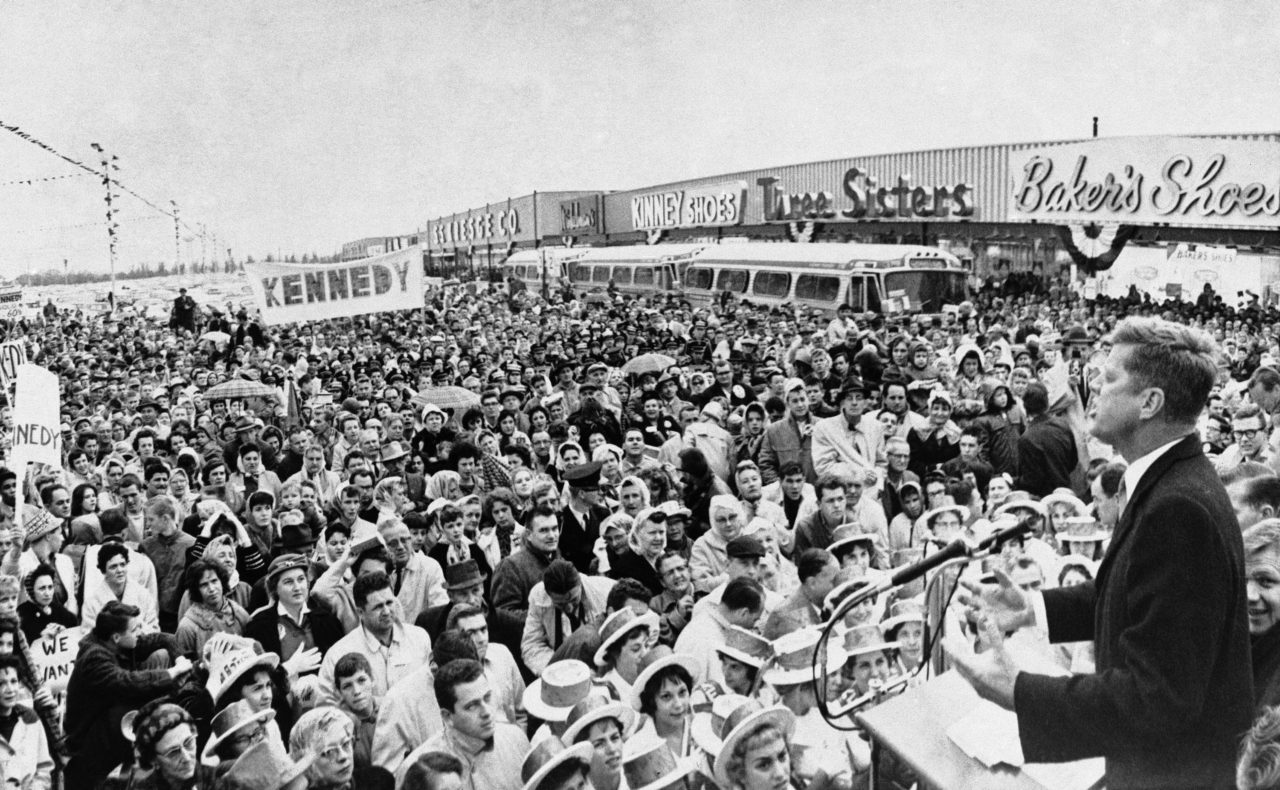 We can also add another point about Macomb: The Detroit metro area has been deeply polarized by issues of race, as well as the related issues of schools, welfare, and crime. Many residents of today’s Macomb can trace their roots to bygone Detroit; that’s where the workers first settled, to be near the new booming factories built by Henry Ford and other auto moguls.  Only later was there a flight to the suburbs, as whites, mostly, traveled across the famed Eight Mile Road that divides Detroit and Macomb.

In particular, the 1967 Detroit riot, which burned much of the city and left 43 dead  (including four law enforcement officials), left deep scars.  Indeed, Detroit has mostly been in decline for the five decades since; it’s common today for some suburbanites to declare emphatically, “I never go into Detroit,” a city they sometimes deride as “DeToilet.” 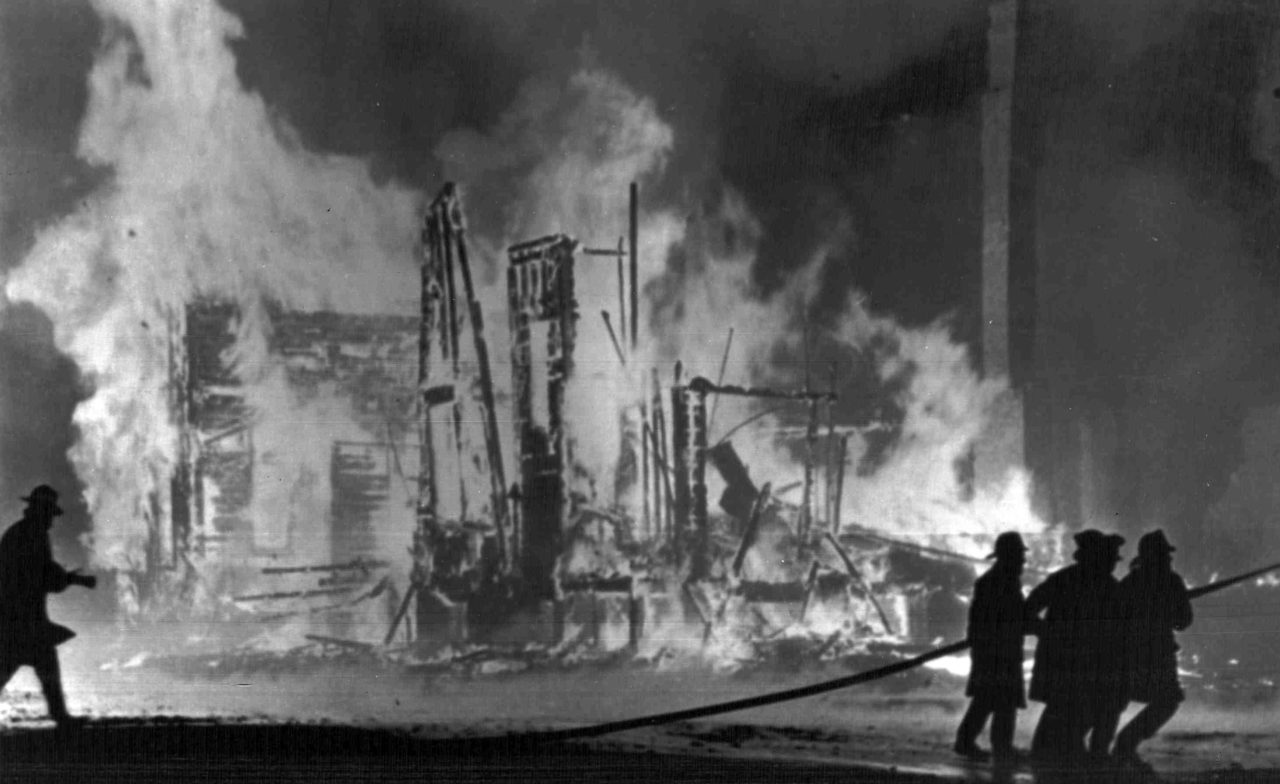 Firemen fight to control blazing buildings during the riots in Detroit, on July 25, 1967. (AP Photo)

Not surprisingly, these massive demographic shifts have had an impact on political sentiments.  These changes indeed became obvious as early as the 1970s, when suburbanites rose up against a short-lived judicial order calling for inter-county school busing.

In 1976, the University of Michigan’s Donald Warren published a study of these upsurges in anger, The Radical Center: Middle Americans and the Politics of Alienation.  That work, still cited today, gave rise to the commonly heard phrase, “Middle American Radicals,” or MARs.

In the 1984 election, when Macomb gave its votes to Ronald Reagan by a 2:1 margin, the tectonic reality of MARs, in this one-time citadel of the Democratic Party, was unmistakable.  Here, in the heart of UAW country, it was elephants, not donkeys, who were notching wins. 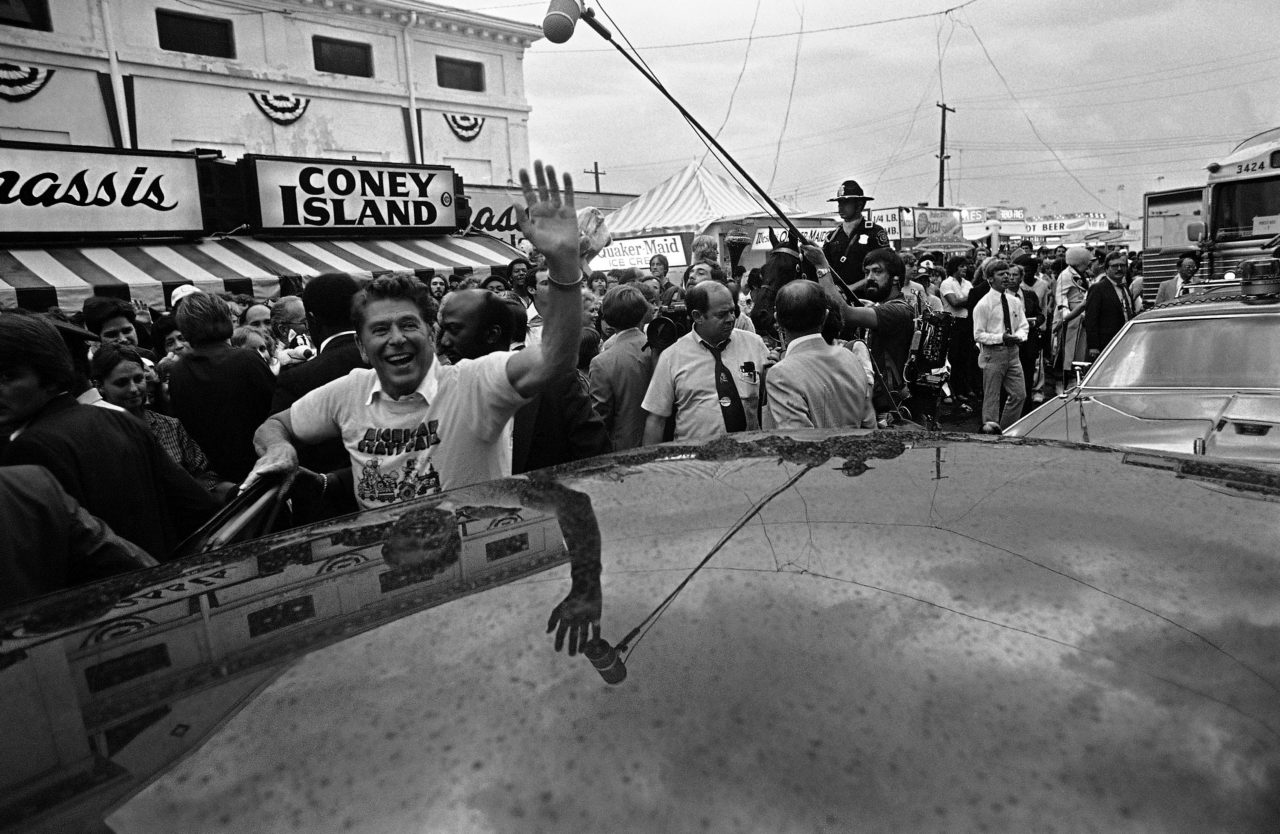 So, enter that same Democratic pollster, Stan Greenberg.  Immediately after the ’84 election, he conducted focus groups in Macomb, seeking to find out what the heck was happening.

Among the interesting findings was the persistence of ticket-splitting.  For instance, even amidst the Reagan landslide, Macomb re-elected its Democratic Congressman, David Bonior.

Thus did the complicated reality of “Reagan Democrats” became clear: These voters were both pro-Reagan and, still, in their fashion, pro-Democratic Party.  Purists might have seen their voting habits as contradictory; yet for their part, the folks in Macomb saw themselves as true to their own interests—even if they were sometimes mostly interested in anger and mistrust.  As Greenberg wrote at the time:

The poignancy in this upheaval captures the broader struggle in our new political life.  These extraordinary electoral swings are the convulsions of the hardworking people, union people, who gave their hearts and hopes to the Democratic party and its leaders, who believed in America and its dream, who bet everything on its reality.

And yet now, Greenberg concluded ruefully, they felt that the Democratic Party, the party of FDR and JFK, had let them down.

Moreover, Greenberg did not shy away from the racial and cultural dimensions of this partisan decay; he was a loyal Democrat, and yet, at the same time, he was willing to follow the evidence wherever it led.  As he also wrote:

And so, Greenberg concluded, “The resentment and disillusionment crystallized in a sense of betrayal, and the people of Macomb Country rebelled.” They rebelled, that is, by voting Republican—some of the time.

In the decades since, observers have tracked the influence of MARs through the candidacies of such disparate figures as Dick Gephardt, Ross Perot, Pat Buchanan, and even Bill Clinton—who carried the country in both 1992 and 1996. The common thread running through all these political flirtations was a deep-seated disaffection from the system, which led MARs to mistrust all politicians, especially incumbents.  They have always been looking for a fresh populist face, of whatever party, who would “shake things up.”

Interestingly, the influence of Detroit and its troubles notwithstanding, race was not a decisive factor in Macomb; Barack Obama carried the county in both 2008 and 2012.  (Although let’s not forget that the 2012 GOP nominee, Romney, was the son of auto company management and himself a certified plutocrat; it was easy for auto workers and their kind to vote against such a familiar class enemy.)

In the wake of the ’12 election, over in New York City, businessman Donald Trump was planning his next move.  He had been deeply impressed by a 2014 book, Blue Collar Conservatives: Recommitting to an America That Works, by former senator Rick Santorum, who himself had grown up in Macomb-ish parts of Pennsylvania.   By all accounts, Santorum’s book, combined with Trump’s own Outer Borough background, helped shape the New Yorker’s presidential campaign, in which the newbie candidate stunned fellow Republicans with not only his brash style, but also his blue-collar-oriented campaign themes, such as repudiating NAFTA, building a wall, and protecting Social Security, Medicare, and Medicaid.

Trump won a 3:1 victory in Macomb during the 2016 GOP primary, and then, in the general election, he carried the county by 11 points.  (We can note that Hillary Clinton carried the adjoining, and more affluent, Oakland County by eight points;  as noted, the two counties, with their different cultures, are heading in opposite directions.) 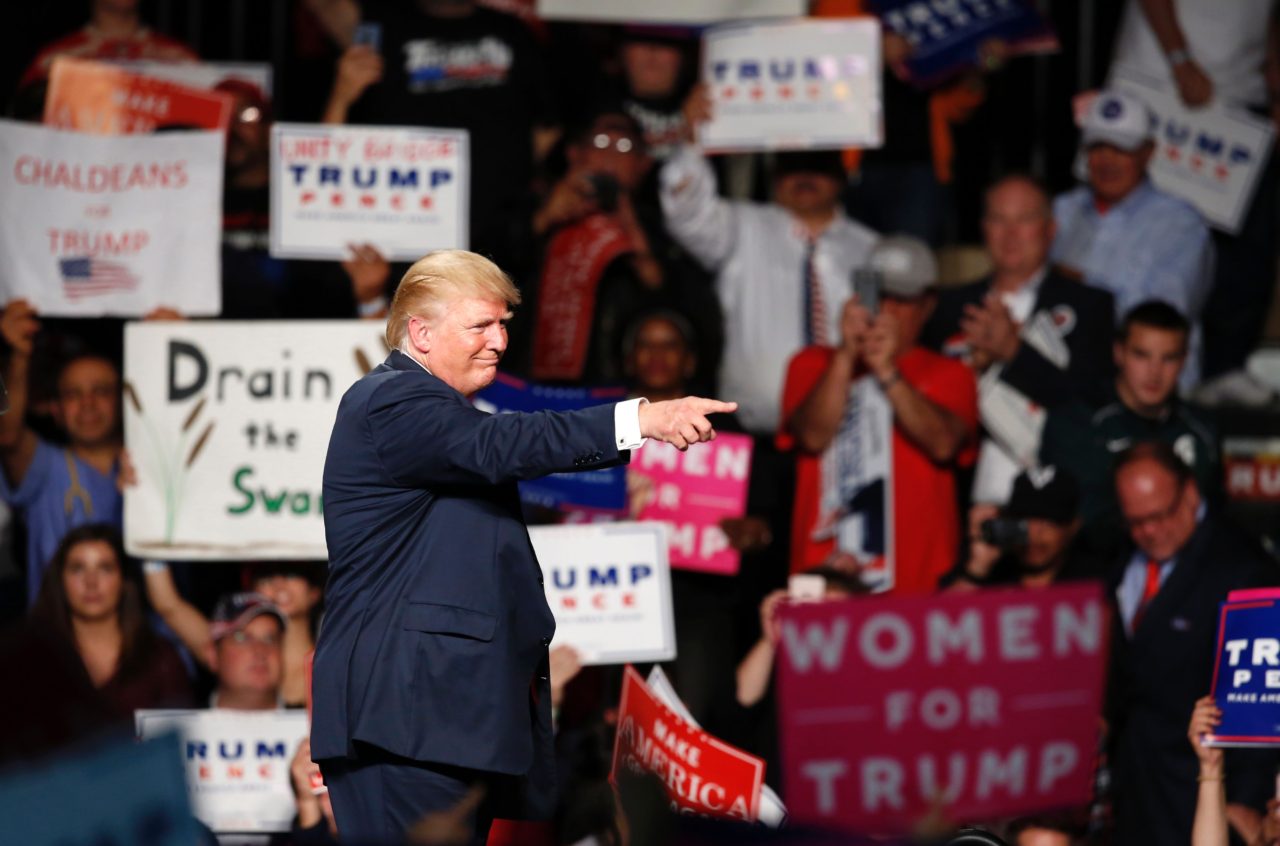 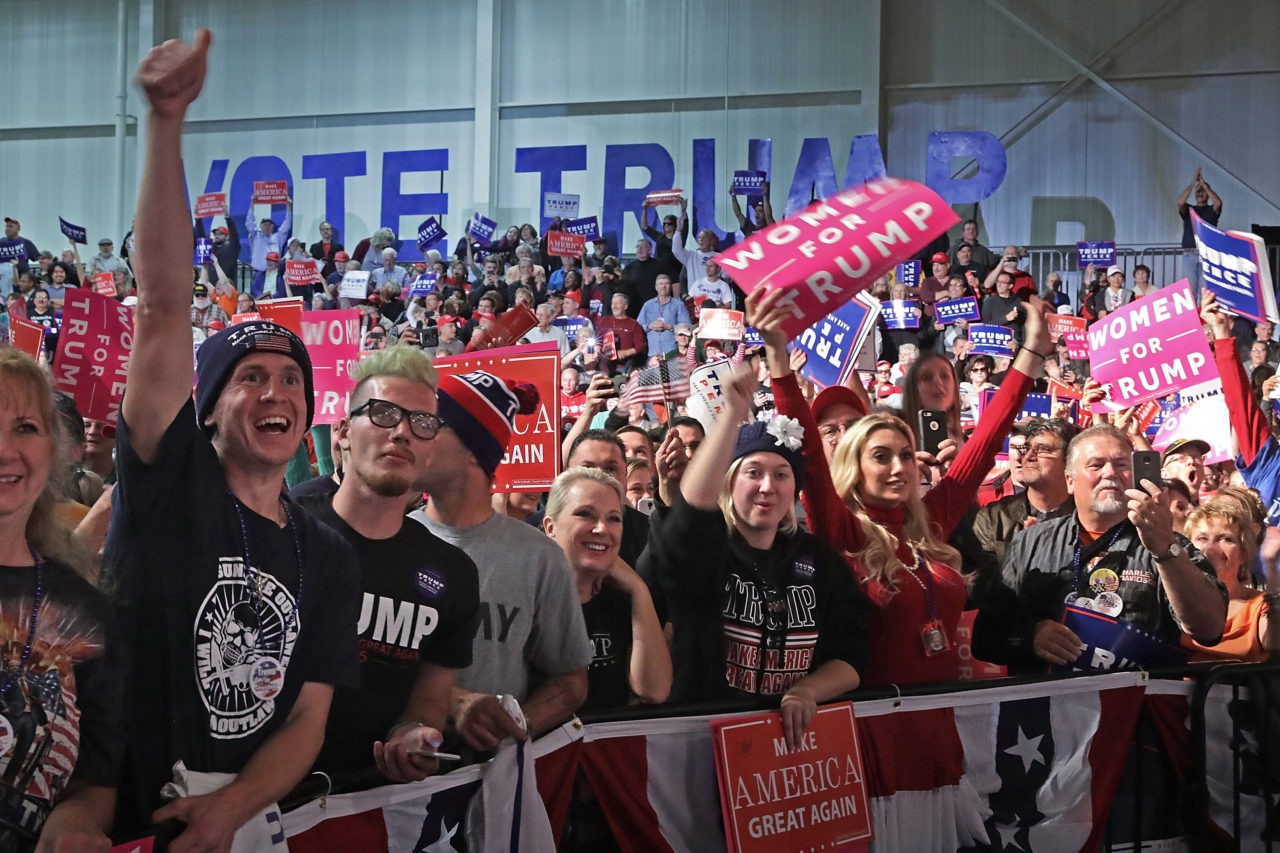 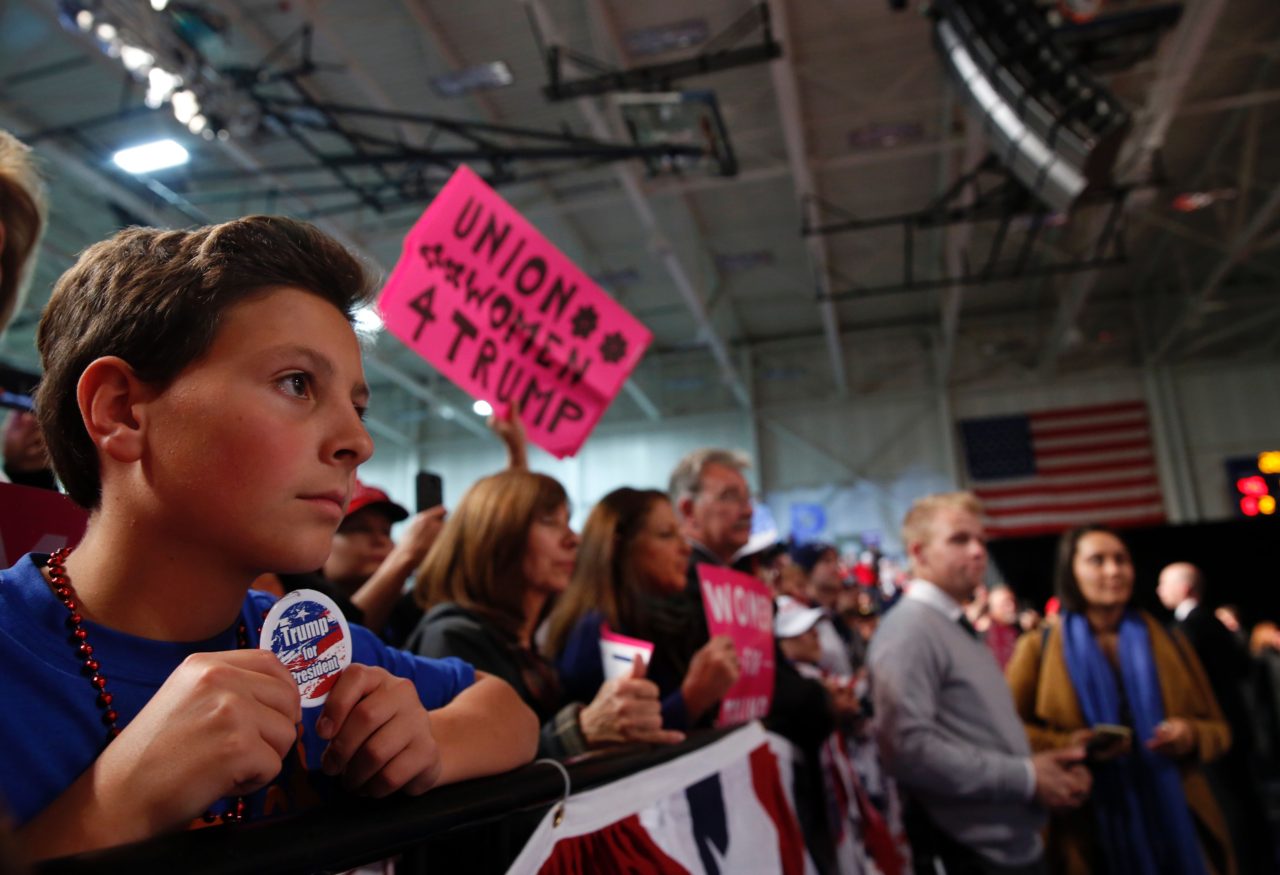 So now in 2017, as Coulter noted, the Democracy Corps report tells us that precisely zero of the Trump voters who were focus-grouped in Macomb regretted their vote, although they did have their deep concerns about the influence of Wall Street.

To be sure, in the three months since the report was released, Trump has been buffeted by negative headlines, and so perhaps there’s also been a decline in Trump’s support in Macomb.  Or perhaps not.  As the results from the four recent competitive special House elections—in Kansas, Montana, Georgia, and South Carolina—have proved, Trump-friendly Republican candidates are still winning.

So that’s how Macomb got to be famous.  That blue-collar corner of Michigan symbolizes the shift of labor away from the Democrats, even as white-collar areas have been moving away from the Republicans.

So now, what’s next?   What might become of Trump Nation—and also, of anti-Trump Nation?

We’ll take up those questions in succeeding installments.