Commenting on a recent finding that many Democrats would have trouble continuing a friendship with anyone who is pro-President Trump, Harvard Law Professor Adrian Vermeule remarked that the least tolerant among us are “white liberal college graduates.”

A recent survey by the Pew Research Center found that 35 percent of Democrats believed that a friend’s vote for Donald Trump would “strain” their relationship. Among white Democrats, the figure is even higher, with 40 percent saying that they would have trouble maintaining a friendship with someone who supported Trump. Nearly half (47 percent) of those who described themselves as “liberal” Democrats said their friendship would suffer with someone who favored Trump. 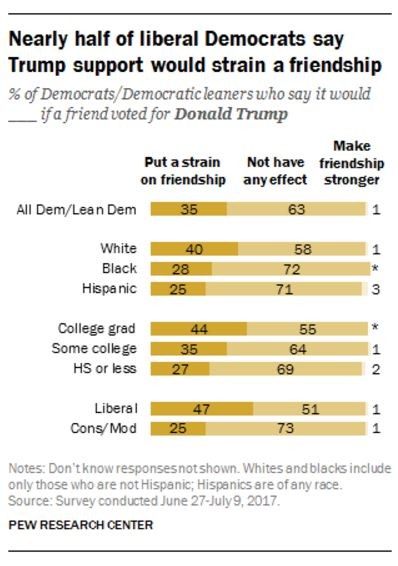 With these data in hand, Vermeule, who is the Ralph S. Tyler professor of Constitutional Law at Harvard Law School, tweeted that, indeed, white liberal college graduates are “the least tolerant” in society, highlighting the three categories most radically affected by a person’s contrary political ideas:

The least tolerant among us: white liberal college graduates. https://t.co/yshK7raX7n

In a Twitter conversation that ensued, Vermeule suggested that on average Democrats and Republicans look at politics differently, which explains its differing effects on one’s personal life and relationships.

Liberalism, he stated, “makes an idol of politics,” and thus, political dissent is looked upon as heresy. In the case of conservatives, however, politics plays a different role. “The data show that Republicans are more politically tolerant,” he said, because “politics isn’t as likely to be an idol, on average.”

In other words, Republicans tend to be more politically detached, with politics playing a less central role in their existence, meaning that they can more easily overlook a friend’s contrary political opinions without it jeopardizing their relationship.

Citing a recent piece from the Washington Post, one commenter proposed that perhaps Democrats live in a bubble and, therefore, are more hostile to contrary opinions. The WaPo article declared that “Democrats tend to be more insulated from dissenting political voices,” and, therefore, “they don’t hear and don’t want to hear those voices coming from their friends’ mouths.”

To this theory, Vermeule responded that he believes such “sociological explanations” are insufficient to fully get to the bottom of the differences between liberals and conservatives in relation to politics.