The vast majority of illegal aliens shielded by an Obama-created temporary amnesty program are adults over the age of 21-years-old, new federal data reveals.

Despite constant rhetoric from the mainstream media and pro-immigration politicians that nearly 800,000 illegal aliens shielded from deportation and given work permits under the Deferred Action for Childhood Arrivals (DACA) program are “kids” and “children,” data from the United States Citizenship and Immigration Services (USCIS) finds that 72 percent of DACA recipients are 21-years-old or older.

As Pew Research Center analyzed, the average age of DACA recipients is 24-years-old, far from the young age that Democrat and Republican establishment politicians like Sen. Jeff Flake (R-AZ) have made the group of illegal aliens out to be. 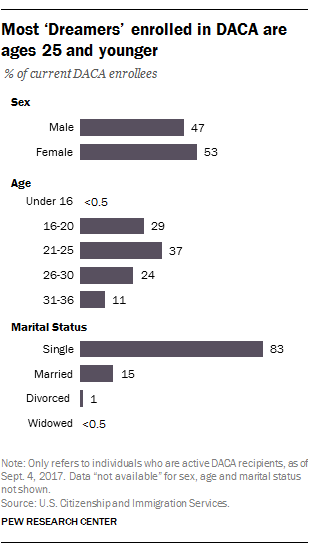 Both political establishments, corporate interest and the open borders lobby have been successful in labeling DACA recipients as mere children, with even President Trump touting the falsehood, calling the DACAs “incredible kids.”

Trump’s administration, via Attorney General Jeff Sessions, has said it will ultimately end DACA. With that announcement, though, has come a barrage of amnesty legislation from Democrats and the GOP establishment, where more than 3.3 million illegal aliens could receive a pathway to U.S. citizenship.

Any amnesty of illegal alien DACA recipients could result in not only a surge of hundreds of thousands of illegal aliens at the U.S.-Mexico border, but also a spike in chain migration, where four to eight million foreign nationals could get legal entry to the U.S., as Breitbart News reported.

Most recently, a former USCIS official said the DACA “fraud rate is 40 to 50 percent,” as Breitbart News reported.