All eyes are on Alabama tonight as Republican Judge Roy Moore faces off against pro-abortion Democrat Doug Jones in the Alabama Senate special election. Polls close at 7 p.m. CT (8 p.m. ET). Breitbart News’ Jeff Poor, an Auburn fan and Alabama native who knows the state’s politics as well as anyone, has a preview of what to look for tonight.

Congrats to Doug Jones! And THANK YOU for running a campaign with strong, constant support for the Dream Act!

11:30 PM: Moore campaign says military ballots are not in yet and talks about a potential recount.

Judge Moore takes the stage and says, “It’s not over. We still have to go by the rules.” He says that “God is always in control.”

Charles Barkley on Ala. vote: “Yeah, we’ve got a bunch of rednecks and ignorant people here, but we’ve got some amazing people.”

1) MCConnell deserves a lot of the blame for Alabama. Mo Brooks would have won by 20% of the vote, and McConnell interference hurt badly. 2)Peter Strzok, Lisa Page text messages show how CORRUPT the SC Mueller and his team are. Wow! More tomorrow.

Congratulations to Doug Jones on a hard fought victory. The write-in votes played a very big factor, but a win is a win. The people of Alabama are great, and the Republicans will have another shot at this seat in a very short period of time. It never ends!

Fact Check: TRUE. Doug Jones winning in Alabama is like Scott Brown winning in Massachusetts. Feels good for the winning party but there's no way to hold the seat.#ALSEN https://t.co/XCkDnBKVOe

11:00 PM: Doug Jones is overwhelmed on his 25th wedding anniversary. He thanks Angels fan Joe Trippi, Doug Turner, and campaign chairman Giles Perkins. He thanks the African-American community that delivered for him. He says “Happy Hanukkah” to all of his Jewish friends.

Doug Jones: "Folks, I gotta tell you. I think that I have been waiting all my life and now I just don’t know what the hell to say.” pic.twitter.com/TeQHGMdaMr

Jones thanks campaign staff at length, then issues policy challenge to his “future colleagues” in DC:

“Don’t wait on me… Go ahead and fund that CHIP program.”

10:50 PM: Booker, not robotic Gillibrand, may actually be the big winner this week among Dem. 2020 hopefuls:

I hate everyone who opposed Roy Moore, so I'd laugh if he won, but I secretly hope Moore loses, so Mo Brooks can replace the Dem in 2 years.

Amazing: turnout is at 72%-77% of '16 presidential race in heavily black counties, but just 55%-60% in rural white counties. Black voters punching above their weight tonight & giving Jones a chance. #ALSEN

Am told Roy Moore has arrived to the site of his campaign's watch party here in Montgomery.

9:20: Potential turnout problem for Moore if the NYT model’s estimates are correct.

Folks, our model thinks that the GOP may have a big turnout problem.
The three, white, GOP counties have fallen far short of our turnout estimates–including two under 75% of our estimates.
That's what the big swing in our estimate is about.

Whatever the outcome in Alabama tonight, I'm guessing residents there will gladly wave goodbye to lots of Acela corridor journalists…

"Late deciders" in Alabama Senate race are "about 10 percent of the electorate right now," @SalvantoCBS reports; late deciders are "breaking towards Moore," according to new exit polling https://t.co/JhJTKxZ7LB pic.twitter.com/sfEziGjKo0

Overall, Moore is up with white college grads 59-37%. JONES wanted this gap closer

8:15 PM: Did Republicans who did not want to vote for Moore instead vote for Nick Saban to join his childhood friend from West Virginia, Joe Manchin, in the Senate? Miss Terry would would probably veto that, though, like she did when Saban wanted to coach the New York Giants.

"The numbers just generally are not there for Doug Jones," @stevechaggaris says of past Alabama voting tendencies. "The question is, can he get enough people — enough Republicans — to cross over and vote for him?" https://t.co/JhJTKxZ7LB pic.twitter.com/CbIkOkPxQT 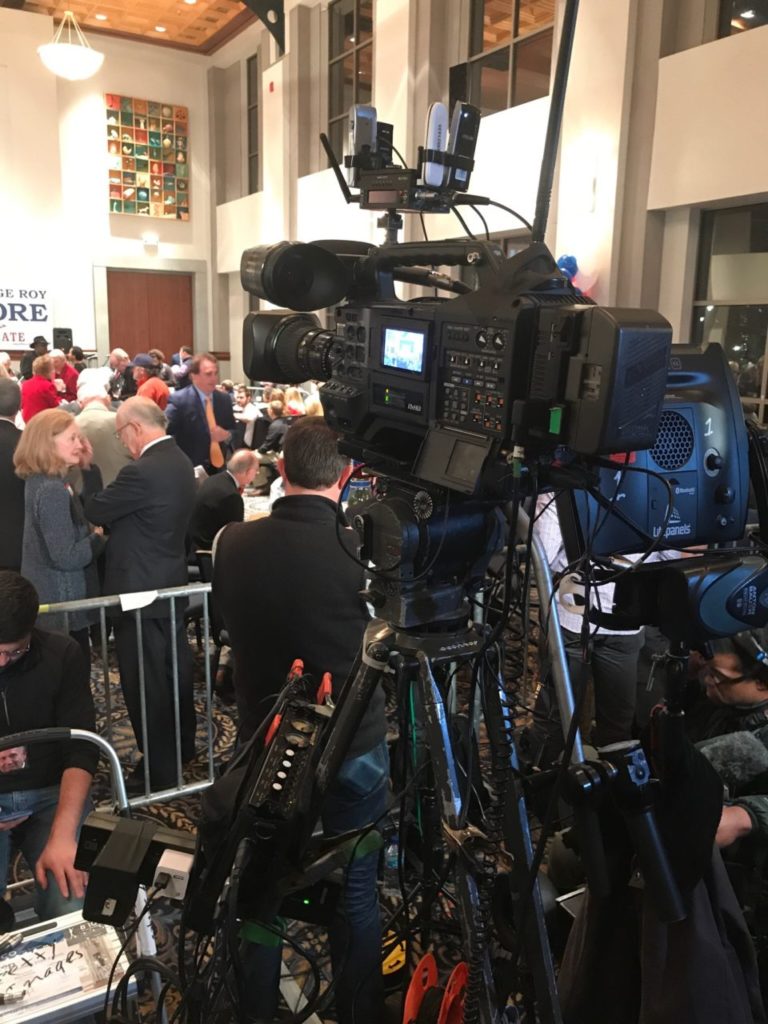 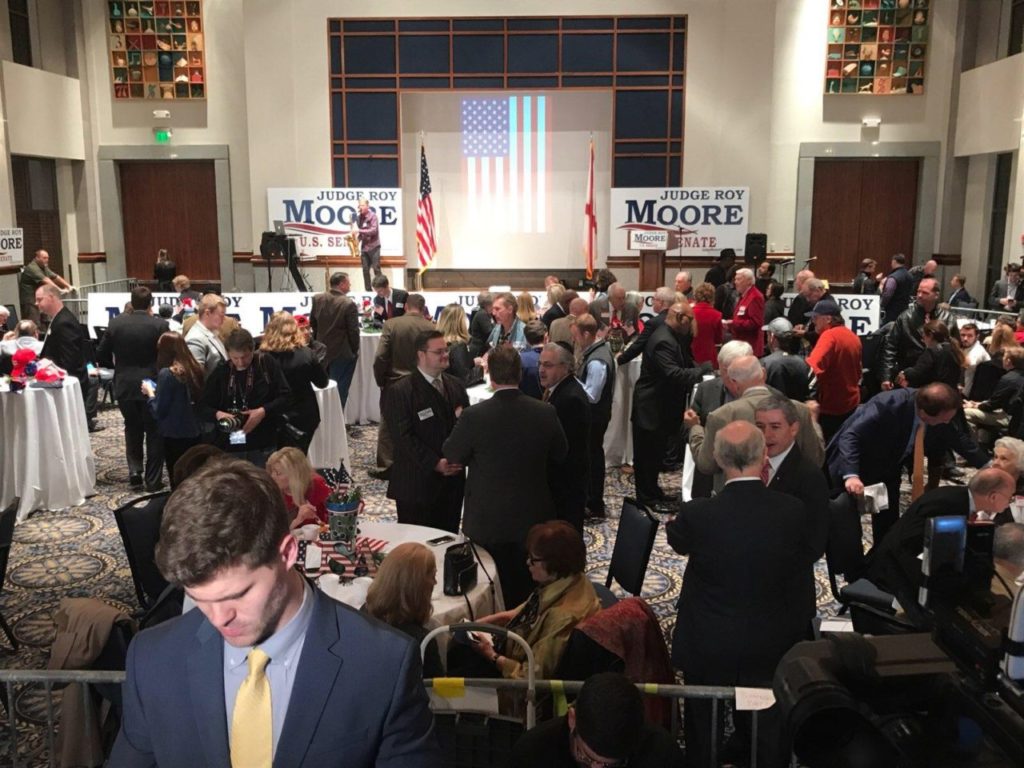 7:40 PM: Clinton campaign’s Robby Mook says exit polls have “broken many hearts in the past.”

Exit polls are fun, but my advice is to just wait an hour for actual results. They have broken many hearts in the past. Make some last minute GOTV phone calls instead.

Exit polls overweight Democrats for the same reason phone polls do. Republicans avoid the nosy intrusive pollsters and Democrats seek them out. Seems Republicans have places to be after voting.

7:10 PM: Senate Republicans have scheduled a Wednesday morning meeting to discuss what to do next if Moore wins tonight.

Will need to discuss:
1) Ethics Investigation
2) Whether to include him in GOP policy discussions
3) Whether to seat him on cmtes

7:05 PM: Exit Polls Should Be Taken with Grain of Salt.

He says city of Ozark tried to prevent him from him setting up outside precinct #alpolitics pic.twitter.com/GwoVA6vMZ2

Some early exit polls are out, and they have found that Trump’s approval rating at 48%.

remarkable that both @NBCNews & @CNN's exit polls have Trump's approval at 48/48 in Alabama.

he won Alabama by 28 points a year ago.

A majority believe that abortion–the issue that could well decide the election–should be illegal in most cases.

NBC News reports that 60 percent of voters made up their minds before November. The sexual misconduct allegations against Moore surfaced on November 9.

Fox News has confirmed that the Washington Post has been denied entry into tonight's @MooreSenate election night watch party in Montgomery AL. Hannah Ford, spokesperson for the campaign says the Post was also asked to leave the event last night in Midland City AL. #ALSen