Mateo, an attorney, was born in Mexico and came to the U.S. illegally at the age of 14 with her parents, who are also illegal aliens, according to the Sacramento Bee.

In #lawschool I often wondered if I was fit to b in #lawjournal, #mootcourt bc not many ppl w/ my same background did. I always went for it bc even if I felt inadequate I thought I could add something of value. I hope to do the same w/ @StudentAidCommission. #undocumentedunafraid https://t.co/JpZOOhJfMU

Thank you Sen. @kdeleon for appointing me to the CalSOAP Advisory Committee. I look forward to working w/ the rest of the committee & the Student Aid Commission in such important task – increase the accessibility of postsecondary education opportunities for low-income students.

She complained that illegal aliens are not adequately represented in state government, and described her appointment as a step towards correcting that alleged injustice.

“While undocumented students have become more visible in our state, they remain underrepresented in places where decisions that affect them are being made,” Mateo said, as quoted by Fox News.

De León, who is running for U.S. Senate against incumbent Sen. Dianne Feinstein (D-CA), described Mateo as: “a courageous, determined and intelligent young woman who at great personal risk has dedicated herself to fight for those seeking their rightful place in this country,” according to Fox News.

Mateo, however, seems somewhat confused about which country she prefers.

In a Facebook post in 2016, apparently celebrating her graduation from Santa Clara University School of Law, Mateo declared, in Spanish: “[E]verything is dedicated to Oaxaca, Mexico!! to that land that I miss so much.” 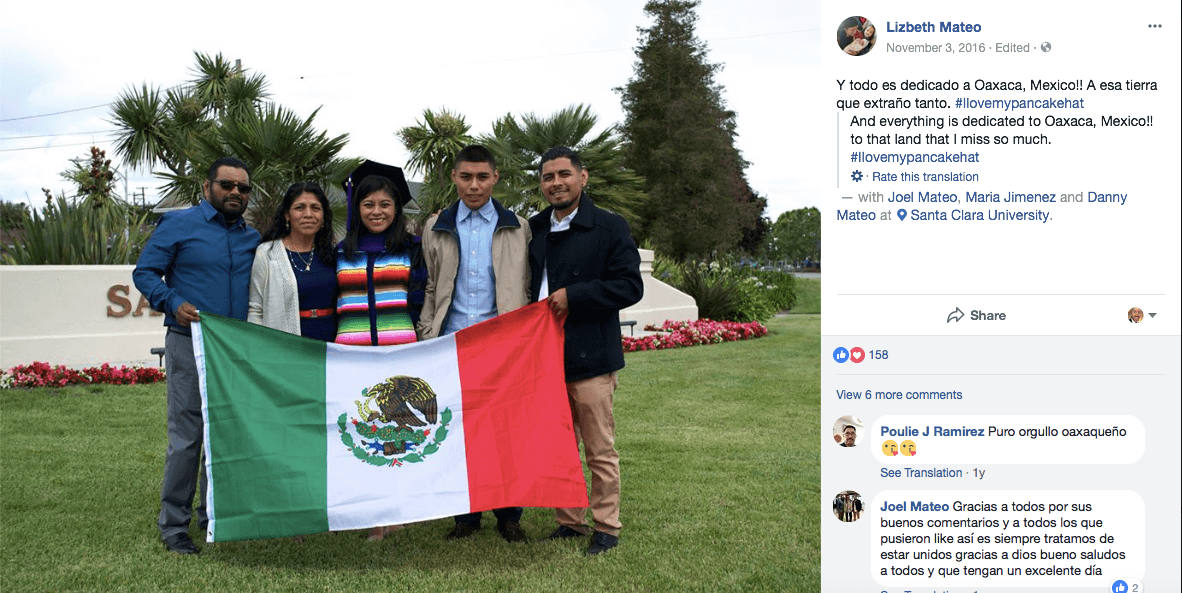 While she is the first “unprotected” illegal alien to hold a state office, she is not the first elevated to public office in California. In 2015, the city council of Huntington Park, California, appointed two illegal aliens to city commissions, sparking a public backlash.

De León and other state officials are stoking an ongoing confrontation with the federal government over federal immigration laws.

Clarification: the State Senate indicated that Lizbeth Mateo was the first illegal alien appointed to state office, but in fact she is only the first without any legal protected status. “The Senate announced that the appointment was a first for the state, but that wasn’t true,” the Sacramento Bee noted. Gov. Jerry Brown appointed a DACA recipient to a state office in 2016. The article has been corrected to reflect that.