The Washington Post‘s deputy “Fact Checker” has retreated from his strange claim that President Donald Trump’s comments on illegal-immigrant crime are misleading because crime by the combined population of illegal and legal immigrants is apparently low.

President Trump has a habit of linking undocumented immigrants to grisly crimes when, in fact, most of the available data and research say immigrants are less likely to commit crimes than the U.S.-born population.

Based on that lede, Rizzo ended his column by saying:

This is another example of Trump cherry-picking a few cases to sell a grand — and misleading — narrative about immigrants and crime. Every demographic group has its share of criminals, but the research shows that immigrants commit crimes at a lower rate than the U.S.-born population.

Reader objections forced him to beat a quick retreat. Via Twitter, Rizzo quickly admitted the distinction between legal and illegal immigrants:

Seeing a lot of, “Oh, you’re conflating legal and illegal immigrant crime data!” No nationwide data to support Trump’s claims as to illegal immigration, and most of the research says all immigrants are less likely to commit crimes than the native-born.

Seeing a lot of, "Oh, you're conflating legal and illegal immigrant crime data!"

No nationwide data to support Trump's claims as to illegal immigration, and most of the research says all immigrants are less likely to commit crimes than the native-born.https://t.co/MLUJRQowwN

In a January Fact Checker article, the Washington Post author did the same trick of conflating crimes by illegal migrants and crime by legal immigrants to slam Trump’s criticism of crime by illegals — even as he also praised Trump for not conflating the two categories:

When we fact-checked him as a candidate in 2015, Trump spoke of immigrants generally and without distinguishing between legal and unauthorized residents. But in his most recent statements on Dec. 6, the president narrowed it down to “illegal immigrants … bringing with them crime, tremendous amounts of crime.” …

The majority of the research available on this question continues to show that immigrants are less likely to commit crimes than the native-born and that overall crime rates decline in areas where immigrants settle.

After his March column appeared, March, Rizzo responded to questions from Breitbart News by simply denying that he had commingled the two categories of immigrants:

We did not. We accurately restated our finding from the previous fact-check that most research shows crime is lower among legal/illegal immigrants.

But his March “Fact Checker” lede does conflate the population of legal immigrants and of illegal migrants:

President Trump has a habit of linking undocumented immigrants to grisly crimes when, in fact, most of the available data and research say immigrants are less likely to commit crimes than the U.S.-born population.

Rizzo has a second line of defense. He argues that his March “Fact Checker” article is OK because it “focused on violent crimes because that was the subject of the president’s remarks.”

Trump’s remarks did focus on violent crime, but he also began his remarks by talking about all crime by illegals:

Protecting the safety and well-being of American Citizens is my highest duty as President. Yet, lawless sanctuary jurisdictions are nullifying federal law, obstructing immigration enforcement, and releasing thousands of criminal aliens into U.S. communities to prey on innocent victims. It’s absolutely terrible.

Rizzo’s “violent crime” sidestep is hidden in the article, which does not say that the WashPo is excluding analysis of the non-violent legal violations and crime committed by illegals. Those violations and crimes include being in the country illegally, using other people’s Social Security Numbers, or working illegally — often for wages below what Americans need for a decent life.

Rizzo does this violent-crime sidestep multiple times in the March article to help him criticize Trump’s comments about all crime by illegals. Here’s one example:

The president paints a menacing picture, but the bottom line is that there is no evidence any of the seven individuals he mentions committed a violent crime while ICE was searching for them. The White House said their release by local authorities meant “more crimes being committed,” but the information they provided does not bear that out for violent crimes.

Rizzo’s third line of defense is that Trump supposedly is misleading the public because he does not have good data from federal and state authorities to support his statements about crime by illegal immigrants. But there is plenty of evidence in the poor federal data, from common sense and from good data in Arizona that crime by illegals is much higher than crime by native-born Americans.

In Arizona, the state tracked the native or illegal status of criminals as they were jailed. Researcher John Lott used the data to show that illegals committed more than twice as much crime per person as similar-aged native-born Americans, and that legal immigrants have a low crime rate.

In January, Rizzo tried to dismiss Lott’s Arizona report by saying it is unique and yet also an “outlier” among other reports. Rizzo downplayed the Arizona report, he told Breitbart News, because the pro-migration Cato Institute “has called [the report’s] methodology into question.”

According to Lott, the data allowed [Lott] to identify “whether they [the prisoners] are illegal or legal residents.” This is where Lott made his small error: The dataset does not allow him or anybody else to identify illegal immigrants …

This is wrong. The category “non-US citizen, deportable” only includes illegal immigrants. We followed the guidance given to us on how to separate these groups out as given to us by the Arizona County Attorneys’ Association, particularly Bill Montgomery, who represented the association and is the DA for Maricopa County, which has about 60% of Arizona’s population. He told us that a pre-sentencing report is used to determine citizenship.

Fourthly, Rizzo’s “Four Pinocchios” claim implies that the president — and the public —  should wait for perfect data before making any conclusions about crime by illegals.

But this is a political demand for progressive rule by experts or judges because it denies Americans the right to make a reasonable and conditional judgment — outside the courtroom, amid imperfect information — that young male migrants from some of the most violent countries on Earth should be viewed as more violent than Americans.

A 2013 report by the United Nations showed the murder rates in the largest cities of the migrants’ home countries; 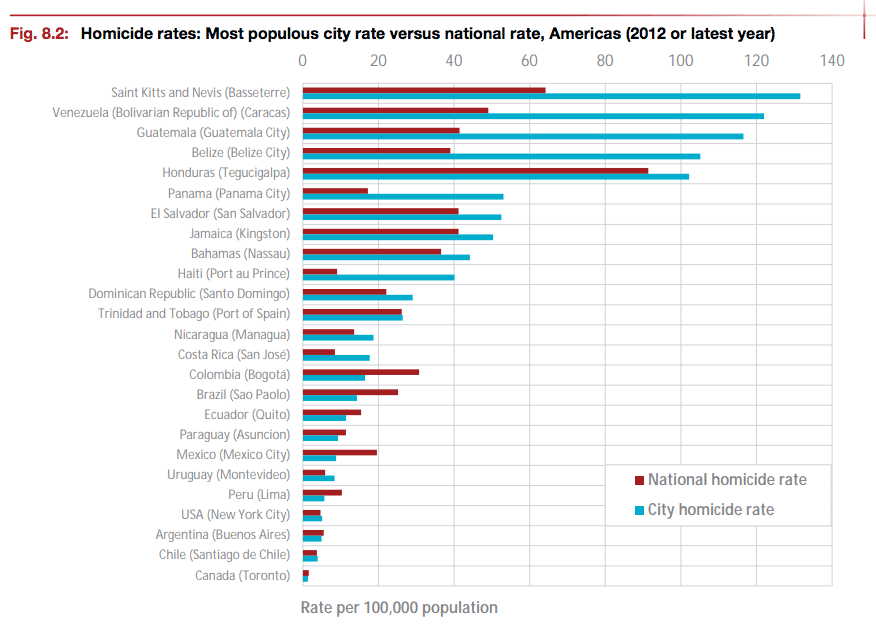 So Rizzo is throwing “Four Pinocchios” at Trump’s comments about crime by illegals — even though Rizzo is improperly conflating crimes by illegals and legals, hiding many non-violent crimes committed by illegals, dodging Lott’s data, and issuing a fatwa on common sense. Why is Rizzo trying to do all of this under the supposed authority of a mere Washington Post “Fact Checker”?

When asked by Breitbart News “Do you wish to minimize barriers against the movement of foreign people into the United States?” Rizzo replied, “The Fact Checker takes no position on the matter.” Americans’ common sense says otherwise.