The GOP legislator who is pushing the “discharge petition” is telling lobbyists that he will have enough GOP signatures to force an amnesty vote in the House once this week’s primaries are finished, sources tell Breitbart News.

California GOP Rep. Jeff Denham is the frontman in the petition effort, which needs just seven more GOP signatures to reach the 25 needed GOP signatures on the discharge petition. Those 25 signatures will allow the 193 Democrats to take the 218-vote majority control of the House floor and push through a no-strings amnesty for roughly 3 million younger ‘DACA’ illegals.

That amnesty would also block President Donald Trump’s pro-American immigration reforms because it would leave him with nothing to buy off the cheap-labor groups in the GOP and Democratic parties.

“Denham is telling people they’ll get to 25 after primaries today because members will be ‘free’ to co-sponsor” the petition once their state primaries are over, one source told Breitbart News.

Another source told Breitbart News that House Majority Whip Rep. Steve Scalise (R-LA) is the only member of the GOP Leadership currently trying to stop the amnesty vote.

Well, we’re still talking after we talked to the President on which way to go … I still have a firm belief discharge is the worst way to legislate.

Outgoing House Speaker Paul Ryan signaled his support for the petition, as Breitbart News noted, during his May 11 press conference. He said:

We want to fix this DACA problem, we want certainty, and we have a border security problem that needs to be addressed. These should not be mutually exclusive goals.

So far, Ryan has not publicly criticized the petition-signers, nor has he threatened to deny them any of the party’s reelection funds. That silence is interpreted by activists as a tacit endorsement of the amnesty push.

The Hill also reported that Denham says he has commitments from enough GOP legislators to force a vote:

Denham claimed that those backing the effort have secured enough supporters on the Republican side for the petition, but not all of them have publicly signed on yet – a strategic move that could be designed to give them more time to work out a deal with leadership and the White House.

If 25 GOP legislators sign the pending discharge petition, then 193 Democrats will join them to get the 218-vote House majority needed for a discharge petition to successfully schedule a floor vote, despite leadership opposition.

The legislation in their petition will create a rare “Queen of the Hill” debate, in which legislators are allowed to vote for or against four rival amnesty-and-immigration bills. The bill which gets the most votes is the winner and is sent to the Senate.

That “Queen of the Hill” debate will allow the business-first GOP caucus to unite behind an amnesty bill that will pass with support from 193 Democrats, but also split its votes to guarantee the failure of pro-American immigration bills. That complicated process will allow the business-first GOP members to pass the Democratic-backed amnesty bill while also pretending they support a pro-American bill.

On May 8, the GOP wrapped up its primaries in North Carolina, Ohio, and West Virginia.

On May 15, the GOP held primaries in Pennsylvania, Oregon, and Nebraska. The Pennsylvania delegation includes several business-first legislators who may join the petition.

Another five state primaries will be completed June 5, freeing up more business-first GOP legislators to vote for the petition.

The leading advocates of the discharge petition are facing tough elections in districts with many Democratic-leaning poor Latinos.

They are Denham, Florida Rep. Carlos Curbelo, and Texas Rep. Will Hurd. 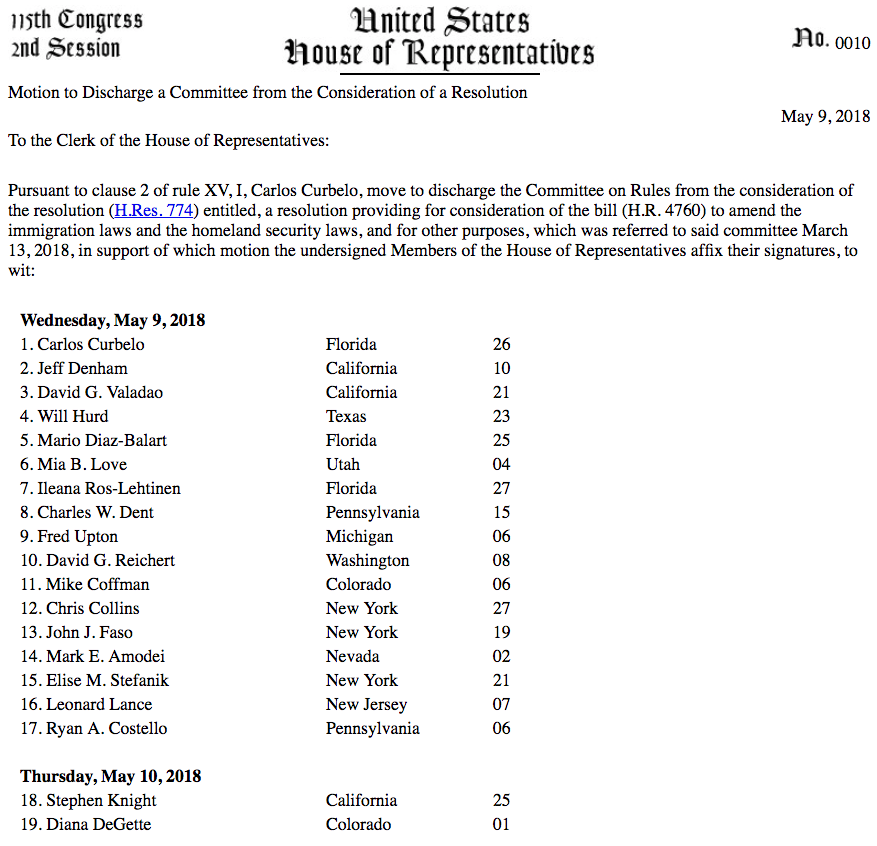 The Democrats’ deputy leader, Rep. Steny Hoyer (D-MD), has indicated that all Democrats will sign the discharge petition once there are enough GOP signatures. This would allow the alliance of Democratic and business-first GOP legislators to force a vote on a no-strings DACA amnesty in the House ahead of the 2018 midterm elections in November.

Denham’s allies are likely hiding their planned vote for the petition because the amnesty push is unpopular among GOP voters.

Months of polling has revealed that a no-strings amnesty for illegal aliens is unpopular with GOP voters. GOP voters and swing voters have consistently told pollsters by huge majorities that they want to see legal immigration levels decreased to raise wages for America’s working and middle class.

While a DACA amnesty would reward illegal aliens enrolled in the program with a potential pathway to U.S. citizenship, it would come with tremendous costs for American citizens.

For example, a DACA amnesty would put more citizen children of illegal aliens — known as “anchor babies” — on federal welfare, as Breitbart News reported, while American taxpayers would be left potentially with a $26 billion bill.

Additionally, about one in five DACA illegal aliens, after an amnesty, would end up on food stamps, while at least one in seven would go on Medicaid.

Any plan to give amnesty to DACA illegal aliens which does not also include provisions to halve legal immigration levels — the U.S. admits more than one million legal immigrants a year at the expense of America’s working and middle class — would give amnestied illegal aliens the opportunity to bring an unlimited number of foreign relatives to the country.

At the southern border, a DACA amnesty has the potential to trigger a border surge that could triple the number of illegal aliens pouring through the border. Since DACA’s inception, more than 2,100 recipients of the program have been kicked off because they were found to either be criminals or gang members.