The GOP-run House appropriations committee voted to help business owners on Wednesday by tripling the resident population of wage-cutting H-2B workers to almost 200,000.

The new amendment will allow CEOs to hire H-2B workers from the two prior years without counting them under the 66,000 annual cap. That legal trick will give CEOs a population of up to 198,000 H-2B workers to help lower wages for a larger number of Americans — even though wages are climbing very slowly in the current good economy, and many younger Americans are far worse off than their parents.

The proposed H-2B population is huge — it is roughly equal to the number of new jobs added in a good month.

“The cheap-labor lobby never sleeps,” said Mark Krikorian, director of the Center for Immigration Studies.  “The only solution is the elimination of the [H-2B] category.”

The amendment was included in the House’s 2019 spending bill. If approved by the rules committee, it will likely be approved in a floor vote by business-first GOP members and by Democrats, and then be merged with a Senate funding bill.

The measure was touted as a boost for company executives by Kansas Rep. Kevin Yoder, who chairs the homeland defense panel of the appropriations committee. “As our economy grows, we’re going to need workers to continue to provide a role … I support the amendment,” said Yoder, who also used the amendment process to promote easier asylum rules for Central Americans and easier migration for Indian and Chinese foreign technology workers.

The existing cap of 66,000 is too low for business owners, Yoder said, adding, “what we have now creates a lot of uncertainty, it cripples industries …  You may be totally left out and be unable to find the workers you need to continue your business.”

Cooperating Democrats echoed Yoder’s description of the program as an aid for CEOs, not employees. “It is a business issue … It is now up to us to give our businesses what they need,” said Maine Democrat Rep. Chellie Pingree.

The H-2B program lowers salaries for Americans because it exempts CEOs from the normal need to compete for workers in the free labor market. Instead of bidding for workers with higher wages and benefits, or else buying American-built labor-saving machinery, the program allows CEOs to import seasonal workers from Jamaica, Mexico, and many other countries at lower wages than needed to hire Americans.

The program is widely used by urban landscapers, ski resorts, and coastal resorts but is also used by the government’s forestry contractors to avoid hiring the Americans who live in rural districts.

The amendment was drafted by Maryland GOP Rep. Andrew Harris, whose district includes a picturesque crab-picking industry that has changed very little in 140 years. The industry still relies on lower-wage women workers to carefully pick crab-meat from crabs, but it is vital to his district because it anchors a tourist industry of hotels, restaurants, home-maintenance workers and crab boats.

“This is not about immigration – it is about temporary workers,” said Harris.

Despite the crab pickers’ importance to Maryland, the local CEOs and the state government do not cooperate to offer any funds to help hire Americans in place of the foreign H-2B workers.

Harris’ measure would also change the allocation system so that the incoming H-2B workers would be shared among a wider variety of companies, instead of being awarded to lucky companies via a lottery.

However, the reform does nothing to allocate H-2B visas to companies which offer the higher salaries, or to the companies which can show the greatest shortage of U.S. workers, such as the high-risk shrimp-fishing industry in the Gulf of Mexico.

One major problem with the cheap-labor visa programs is that they quickly expand to swallow up entire industries, such as the farm-labor sector, university research laboratories, and the software industry. “Once a significant number of players in an industry have this cheap, controllable foreign labor, every [player] has to get it for it to be fair — or the ones who don’t have it are going to go out of business,” said Krikorian.

The white-collar version of the H-2B program is the H-1B program which keeps a resident population of roughly 600,000 workers in software companies, university research laboratories, and university hospitals.

In total, there are roughly 1.5 million visa-workers in U.S. college-graduate jobs, plus at least 300,000 blue-collar or manual-labor jobs. A pending GOP proposal would import another 1.35 million “H-2C” visa-workers for jobs in agriculture and the meatpacking industry.

Industry executives claim they cannot hire employees — but also complain they do not want to raise wages for the lowest-tier workers because that would force them to raise wages for higher-tier workers. It “causes a ripple effect in all wages across the board,” complained Josh Denison, a landscaper in Oxon Hill., Md. He added:

If your $10.30 basic domestic or H-2B laborer has an arbitrary wage increase, then you have to adjust wages [upwards] across the board in a sliding scale to keep it fair and balanced. What happens to the $12 guy if the new guy is making more? And what happens to the $15 guy?

At least 5 million work-willing Americans are not in the labor force, according to the Bureau of Labor Statistics — and many millions of Americans would take higher-wage jobs if they were offered higher wages. 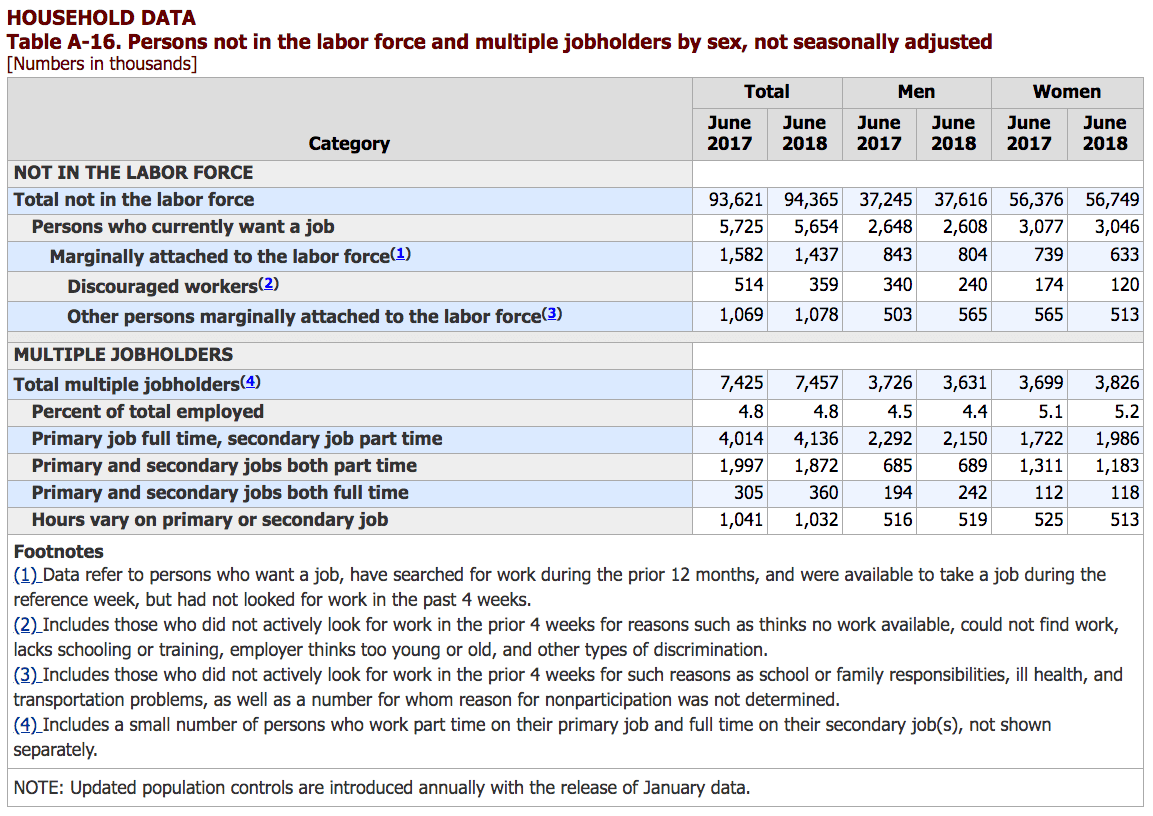 However, the H-2B law merely requires that companies briefly advertise for American workers, even in obscure newspapers. There is no requirement that the jobs be posted online.

Some H-2B employers use the program to discriminate against Americans. According to a June 2018 statement by the Department of Justice:

The Justice Department today reached a settlement agreement with Triple H Services LLC, (Triple H), a landscaping company based in Newland, North Carolina, that conducts business in Virginia and four other states. The agreement resolves the Department’s investigation into whether Triple H discriminated against qualified and available U.S. workers based on their citizenship status by preferring to hire temporary workers with H-2B visas, in violation of the Immigration and Nationality Act (INA).

The Department’s investigation found that although Triple H went through the motions of advertising over 450 landscape laborer vacancies in five states, it did so in a manner that misled U.S. workers about the available positions and prevented or deterred some from applying. The Department found that Triple H did not consider several qualified U.S. workers who applied for positions in Virginia during the recruitment period, and instead hired H-2B visa workers. In several states where jobs were available, the Department found that Triple H prematurely closed the online job application process for U.S. worker applicants, filled positions with H-2B visa workers without first advertising the jobs to U.S. workers in the relevant locations, or advertised vacancies in a manner that did not make the postings visible to job seekers using state workforce agency online services.

More importantly, the effect of the H-2B program is to flood the market with foreign workers and so drop wages for a broad swath of Americans. That wage drop also deters lower-skilled Americans from seeking jobs in the H-2B-using industries and companies.

Democrats opposed the bipartisan measure because they want to trade the H-2B program for a nationwide amnesty that will also lower wages. “I must urge a ‘No’ vote,” said California Democrat. Rep. Elsa Roybal-Allard.

Whatever [numerical] cap lawmakers promise on a work-visa program is always going to go up … because as soon as some employer starts using it, the other employers need to use it to stay competitive… Once a significant number of players in an industry have this cheap, controllable foreign labor, everybody has to get it for [the program] to be fair — or the ones who don’t have it are going out of business.