President Donald Trump is defending all women from legal and cultural erasure by the transgender lobby, say medical and legal experts.

“This is the irony … he is the U.S. women’s rights champion” because he is preventing men from inserting themselves into the legal and cultural definition of women, said Dr. Michelle Cretella, the executive director of the American College of Pediatricians.

“What Transgenderism requires is that [the term] ‘gender identity’ replace ‘sex’ in the law,” Cretella told Breitbart News. If that happens, then men who say they have a female “gender identity” will be legally defined by the federal government as women, and “we can longer distinguish legally between males and females … [because we] have just eliminated the [biology-based] legal definition of women,” she said.

“That is female erasure by definition,” she said.

Transgender activists “are trying to erase the male and female [sexes] and turn [society] into a mishmash of 50 or 93 [gender] whatevers,” said Dr. Jane Orient, the executive director of the Association of American Physicians and Surgeons. Their political goal is difficult to appreciate, she said, because “it is hard to think about things that are really crazy.”

Trump hinted at this larger political fight on Monday when he was asked about his agency’s proposal to document each person’s sex by their biology, not by their declared “Gender Identity,” which was the policy pushed by President Barack Obama. Officials need to define “sex” because federal laws bar discrimination based on sex.

An Oct. 21 New York Times report said Trump’s officials have drafted a memo which defines a person’s legal sex as “a person’s status as male or female based on immutable biological traits identifiable by or before birth.”

On October 24, Trump’s Department of Justice asked the Supreme court to strike down a court decision which said laws against sexual discrimination must be extended to include discrimination against people who declare an opposite-sex “Gender Identity.” The department said “the court of appeals’ conclusion that gender-identity discrimination categorically constitutes sex discrimination under Title VII is incorrect … the ordinary meaning of “sex” does not refer to gender identity.”

Trump’s deputies are also pushing the United Nations to drop the use of “gender.” For example, officials prefer that the phrase “violence against women” be used in U.N. documents instead of the open-ended “gender-based violence” terminology.

Women activists “are not happy about his personal life, but we support his policy,” Cretella told Breitbart News.

The vast majority of articles about the transgender ideology focus on politicians’ support or opposition to the creation of legal rights for people who want to live as members of the other sex.

The ideological disputes and potential consequences for society are ignored by reporters who uncritically embrace the movement’s contradictory logic. For example, many reporters use now the vague “gender” term instead of relying on biological sex to distinguish between men and women. Many reporters also accept the claim that doctors “assign” a person’s sex when they are born, even though sex is determined by each person’s genes nine months before birth.

Very few journalists address the concerns by women’s rights campaigners — on the right, the left, in nonpartisan groups, and from lesbian-rights and feminist activists in the U.S., in Canada and the U.K — that women are being erased in law and culture by aggressive advances of men who say they are women. The media passivity exists despite transgender activists’ openly advertising their intention to  “Break the Binary” — to erase the legal and cultural distinctions between two equal, different and complementary biological sexes. 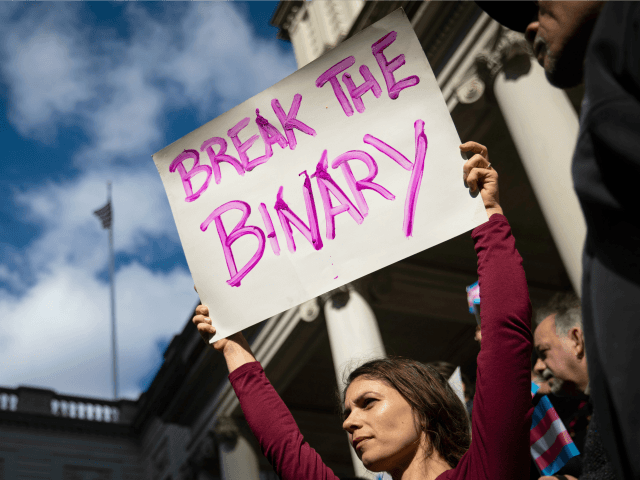 The central issue in the transgender vs. biology fight was outlined nine years ago by then-Democrat Rep. Barney Frank, a far-left Massachusetts Representative in Congress who was the leading advocate for creating new legal rights for gays and lesbians. He told National Journal in 2009:

That’s the question—whether the law should embody that principle [that this is a two-[sex] society], or should the law say to the very small minority of people who do not want to stay the same [sex] for the rest of their lives, that they will not be discriminated against … I’m against discrimination based on anything other than the ability to do the job.

Frank dismissed concerns that the erasure of legal distinctions between the two sexes could have unpredictable effects on society. “That is the grossest stupidity that I’ve heard in many years … Totally stupid … there is zero evidence for it.”

But supporters of a normal, two-sex, binary male-and-female society say there is massive and growing evidence that the transgender ideology is eroding women’s rights and status, even though the ideology has not been written into law by Congress.

The trend is clear in the sports sector.

On October 14, a man who said he is a woman was allowed to enter and win a women’s sprint-racing cycling championship, bumping one woman off the podium and two other women to steps below his gold-medal step.

The man, who is named Rachel McKinnon, touted his victory via Twitter:

McKinnon argues that he is a woman because he has the “gender identity” of a woman. “I’m a woman. I have a body. Therefore, I have a woman’s body,” he argues.

McKinnon’s victory in the race came at the cost of at least five other women.

Breitbart News could not readily find the name of the woman who was erased from the top-three ranking and pushed off the podium.

Third-place winner Jen Wagner protested the decision to allow the man to join the women’ race, saying it was not fair to women.

You were not 3rd place. You are a hero amongst lesser men x @jkwagnermd https://t.co/QmLZOy4q72

But Wagner later submitted to pro-transgender activists following public criticism. She erased the “NOT fair” Tweet and apologized to the man:

They were just inflammatory, and that's not who I want to be or am. While I may not agree with the rules, when I pin on a number I agree to race by them. I also respect @rachelvmckinnon 's right to compete within the rules.

I apologize, @rachelvmckinnon , for not properly congratulating you on race day. I hope you accept it a few days late. Congratulations and enjoy your off-season. Thanks, everyone, for reading. –Jennifer

The fastest woman in the competition, a Dutchwomen named Carolien Van Herrikhuyzen, accepted her second-tier status by holding McKinnon’s hand as they cycled a circuit after the race.

This is Dr. MrKinnon's gold-winning ride. The match sprint is the shortest race in cycling, and is dominated by larger and more powerful riders. Note the size of the gap that she closed on the silver medalist, without appearing to strain much at all. https://t.co/RP56usr1F2

Another leading woman racer, Sarah Fader, erased herself from the race in protest at McKinnon’s entry, according to an Oct. 18 article by Fred Dreier at VeloNews:

Known by some cycling fans for her maiden name, Caravella, Fader raced in the U.S. professional road scene from 2006-2015. Fader was set to race against Dr. McKinnon in the masters finals in Los Angeles. She was the defending masters world champion in the event, and she set the fastest time in the qualifying heats. She beat Dr. McKinnon in both a 200- and 500-meter time trial during the weekend.

Fader, however, told me that she felt that racing against Dr. McKinnon was simply not fair. Dr. McKinnon stands six feet tall and weighs 200 pounds. Fader, by contrast, is  5-foot-5 and weighs 135 pounds. So minutes before the finals were set to start, she pulled out of the competition entirely.

“I thought that doing it this way was my own form of protest,” Fader said. “I knew that I personally did not agree with the situation. I don’t want to compete in a sport where the rules are unfair.”

Other female competitors shared her opinion, Fader said, however, they were scared to speak out publicly against Dr. McKinnon. These riders feared being labeled discriminatory and insensitive, and thus kept their opinions to themselves. Indeed, one other rider from the race reached out to me to share a similar opinion to Fader’s. This rider wished to remain anonymous.

McKinnon “robbed those women of their honors,” said Cretella. “That is one example of a transgender man … This is what happens when ‘gender identity’ takes the place of sex — women lose, women are erased.”

No Breitbart, I don't want to talk to you. pic.twitter.com/IM6zm5XPsS

Feminism-appropriating reactionary transphobes (FARTs, previously known as TERFs) are the ones who don't understand biology, reality, and science.

I wrote a book on these kinds of lies!

“TERF” is the dismissive slur used by transgender advocates towards the feminists who recognize that biology defines the complementary distinctions between men and women. TERF stands for “Trans-Exclusionary Radical Feminists.”

McKinnon argues that biology is “socially constructed” and so can be rewritten to show that some males really are females:

Body parts are neither 'male' nor 'female.'

A penis is not 'male.' There are females that have them.

A vagina is not 'female.' There are males that have them.

Use your words, kids. If you want to talk about a body part, use its proper name. Don't resort to 'male genitals.'

McKinnon’s comment about sexual organs reflects the reality that few of the few people who describe themselves as Transgender undergo traumatic genital cosmetic surgery. Only about 4,118 Americans surgically altered their bodies in hospitals from 2000 to 2014 to appear like members of the opposite sex, according to a pro-transgender medical study.

Despite McKinnon’s example of female erasure — and many other examples in sports — transgender activists are now charging Trump with trying to “erase” people who want to live as members of the opposite sex.

But that “erase” phrase was taken from two-sex feminists who have long argued that the transgender ideology wants to erase the biological definition of women, said Cretella. “They are pirating the language.”

But McKinnon insists that the government’s rejection of the “gender identity’ definition for “sex” will leave him and other people without protection. In an op-ed for the Washington Post, McKinnon said:

I don’t know what to say to you if you disagree with basic tenets of human decency. We will not be erased.

But people are either women and men, Cretella said, so “transgender people had human rights before Obama pulled his underhanded tactic of extending [sex discrimination law] to include a person’s ‘Gender Identity.'”

The “transgender erasure” claim, said Cretella, “is complete and utter nonsense, it is absolutely ludicrous.”

The transgender movement is diverse, so its different factions have different goals and priorities. It includes sexual liberationists, progressives, feminists who wish to blur distinctions between the two sexes and people who glamorize the distinctions between the two sexes. It includes high-profile children, people who are trying to live as members of the opposite sex and people trying to “detransition” back to their sex, men who say they are lesbians, masculine autogynephiles, wealthy donors, politicians, political professionals, and medical service providers.

Despite the growing damage to young people — including people who give up their claim to be “transgender” and reclaim their sex —  the gender ideology is rapidly gaining power, aided by huge donations from wealthy individuals and medical companies. In Ohio, for example, in February, a judge forced parents of a teenage girl to give up custody so she can begin a lifetime of drug treatments and surgery that will allow her to appear as a male.

The progressive push to bend Americans’ attitudes and their male-and-female civic society around the idea of “gender identity” has already attacked and cracked many of the popular social rules which help Americans manage the cooperation and competition among and between complementary, different and equal men and women.