“You are our greatest agents for change,” she encouraged the group. “Through your voices, you have the power to influence, transform, and lead your communities from within. You can lead by example every day among your peers, your friends, your classmates, and your teammates.” 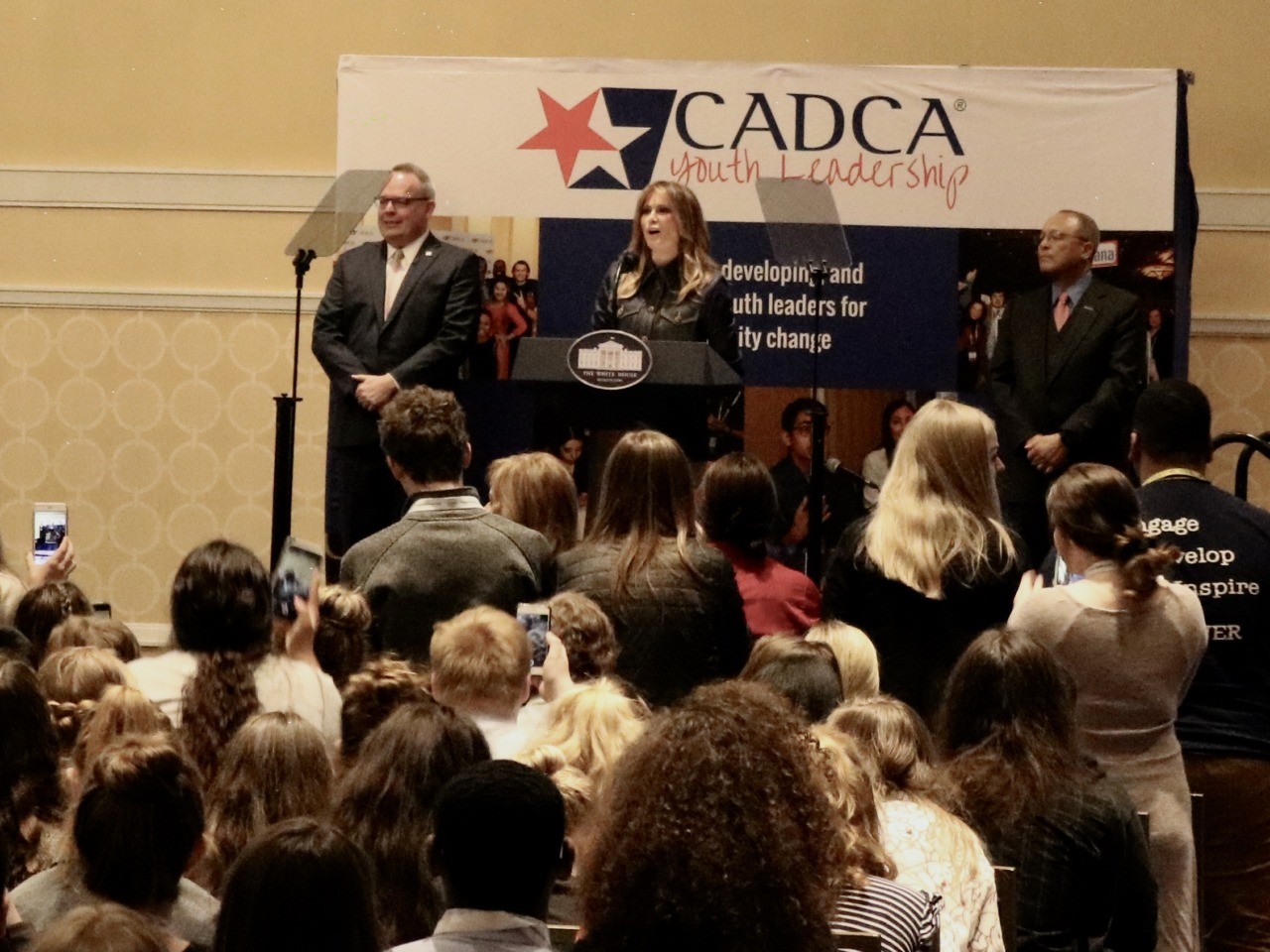 The American youth receiving awards have trained hundreds of other youth in prevention of drug abuse across the nation and world. 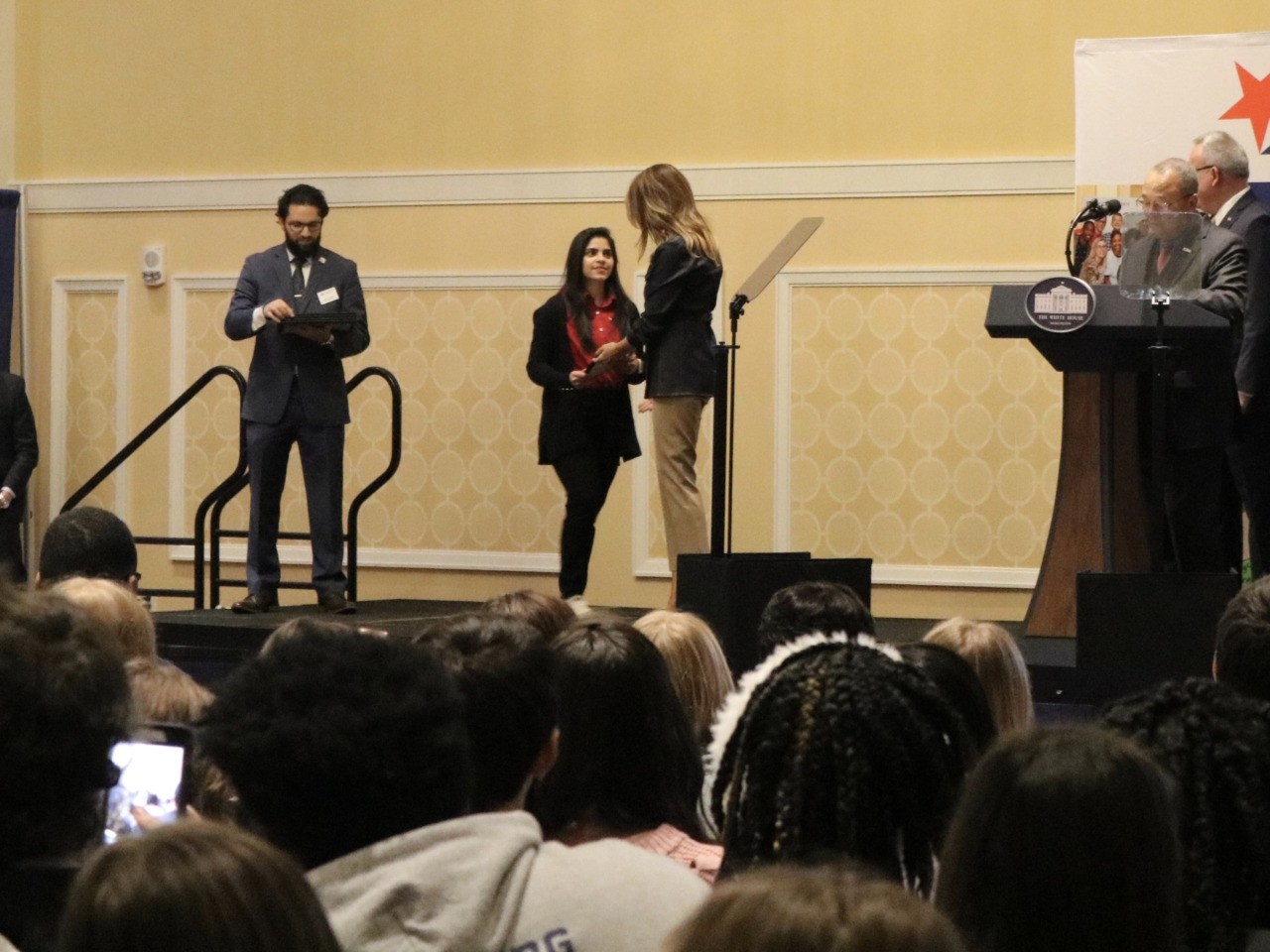 “Part of my Be Best campaign focuses on understanding the harmful effects of opioid abuse on our children and finding opportunities to help families and young mothers who have been affected by this very real problem,” the first lady told the crowd of young people. She spoke of the opportunities she has had to hold “babies suffering from neonatal abstinence syndrome – a result of opioid addiction in pregnant mothers.” 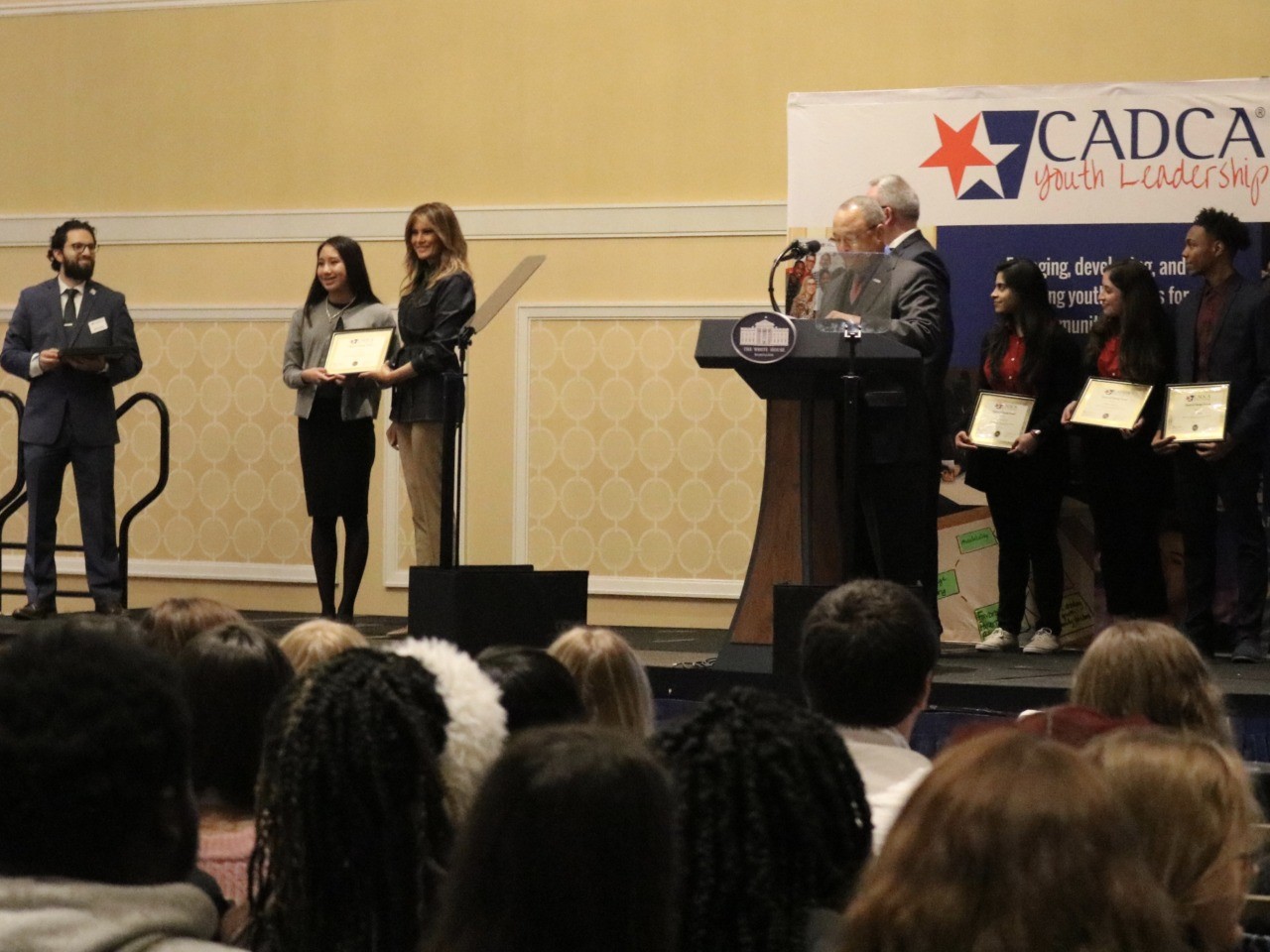 “Recovery is possible,” she reassured the group. 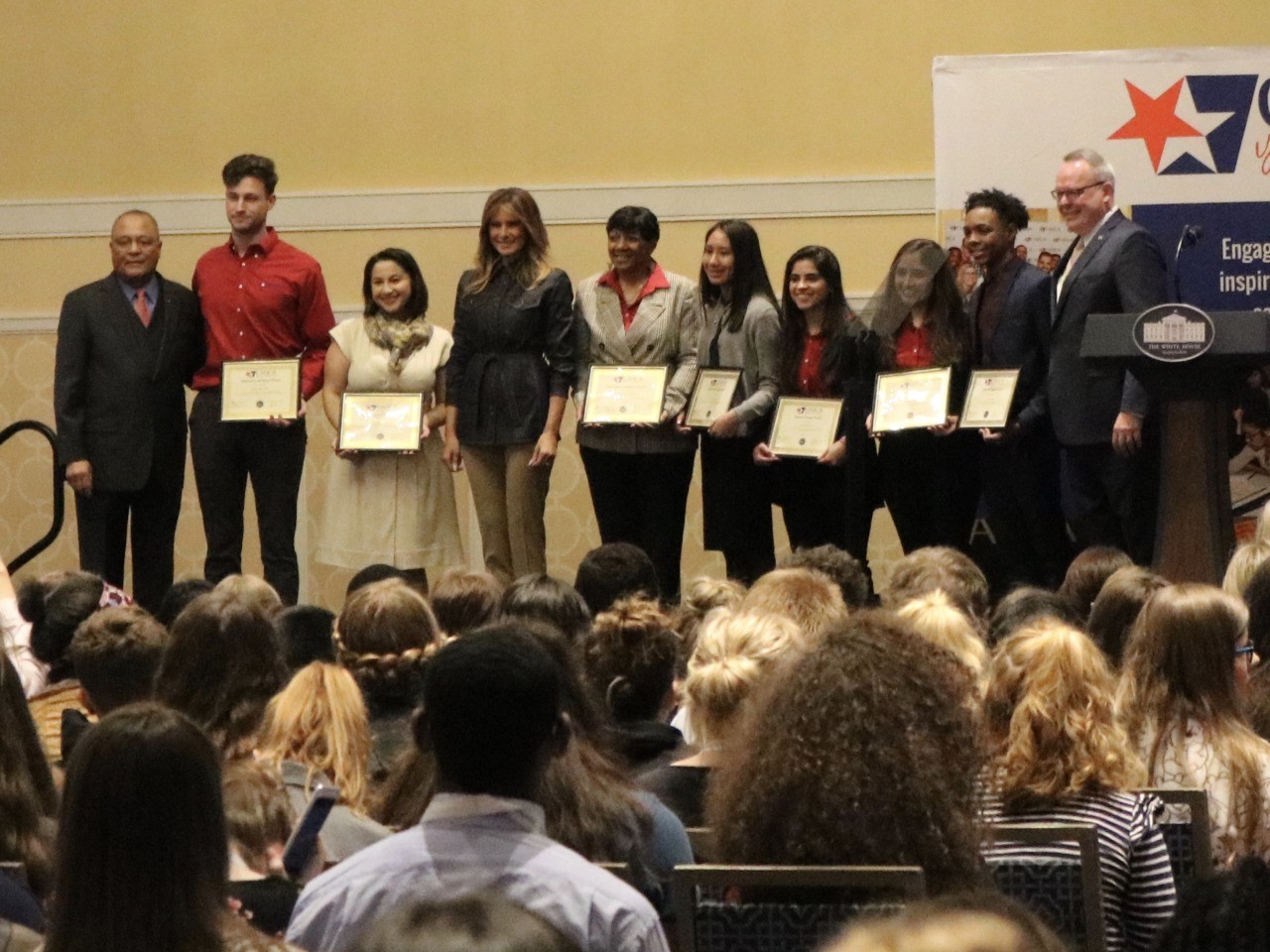 Melania Trump stands with youth recipients of the “Agent of Change” award for accomplishments in fighting the opioid epidemic. (Credit: Michelle Moons/Breitbart News)

First lady Trump traveled directly from the youth drug prevention conference to the Office of National Drug Control Policy (ONDCP) where Trump administration officials briefed the first lady on many facets of the emerging drug epidemic in the United States and what is being done to counter it. 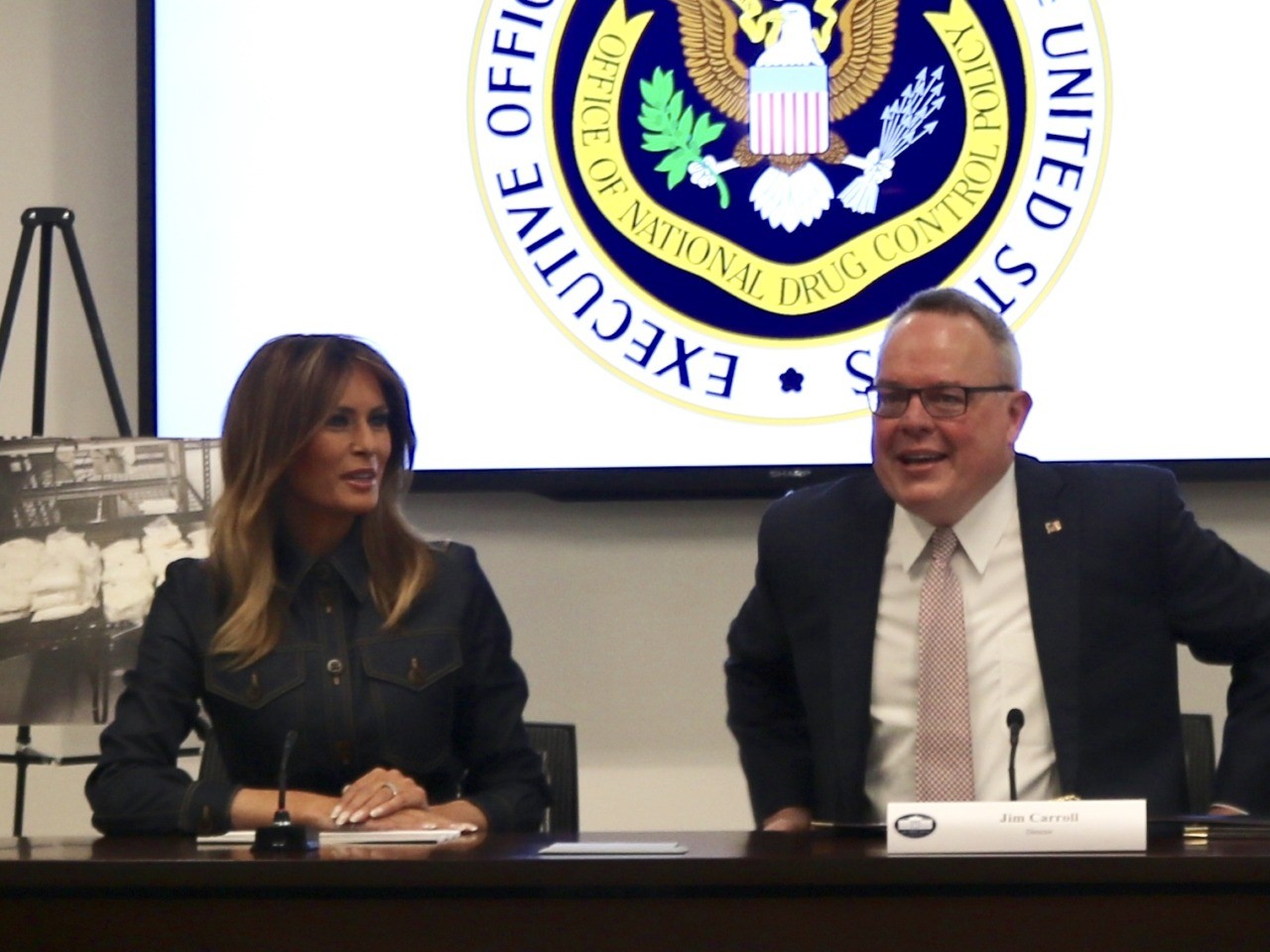 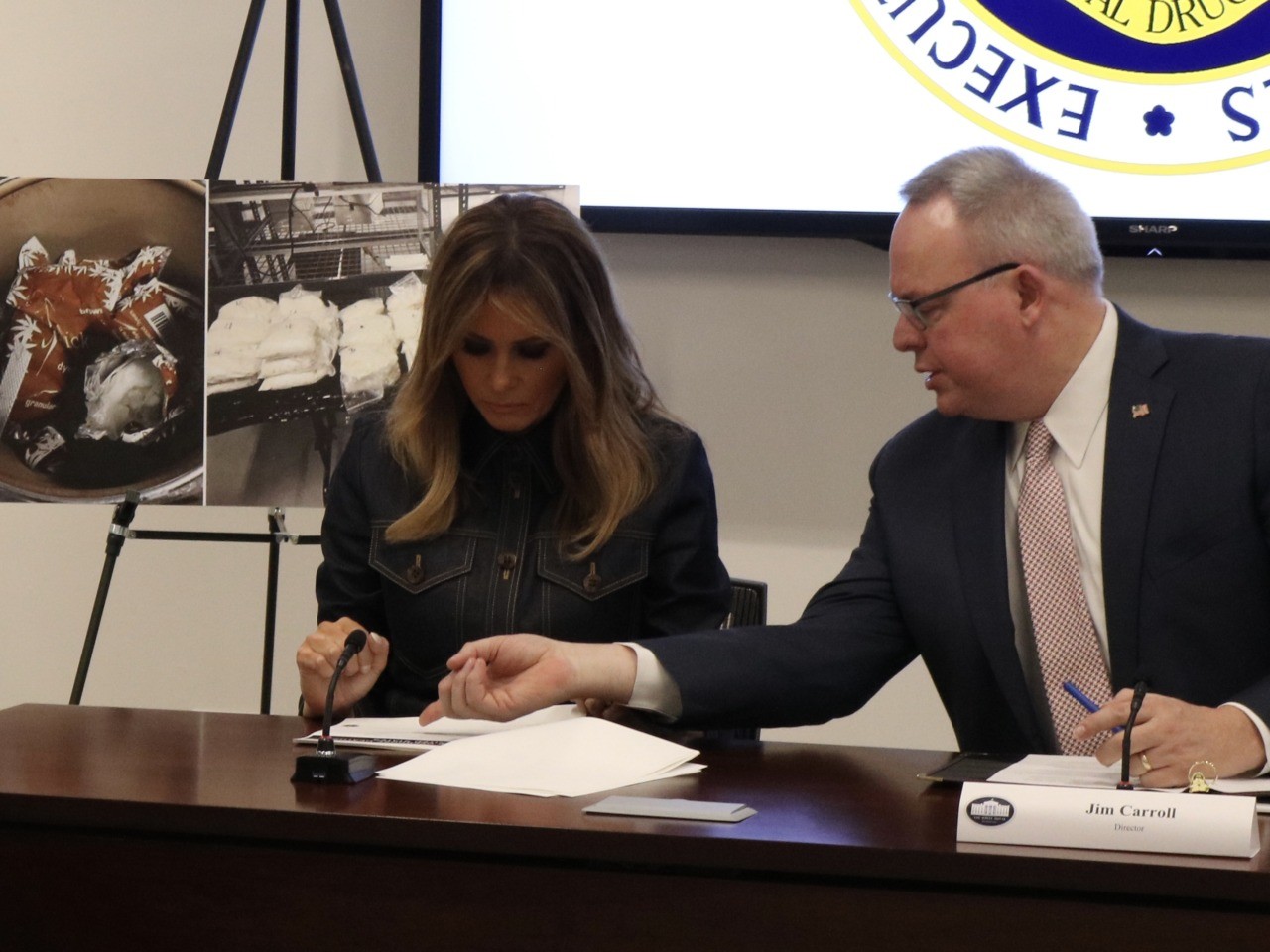 The first lady reviews information from the Office of National Drug Control Policy on emerging challenges of the opioid crisis and programs combatting it. (Michelle Moons/Breitbart News) 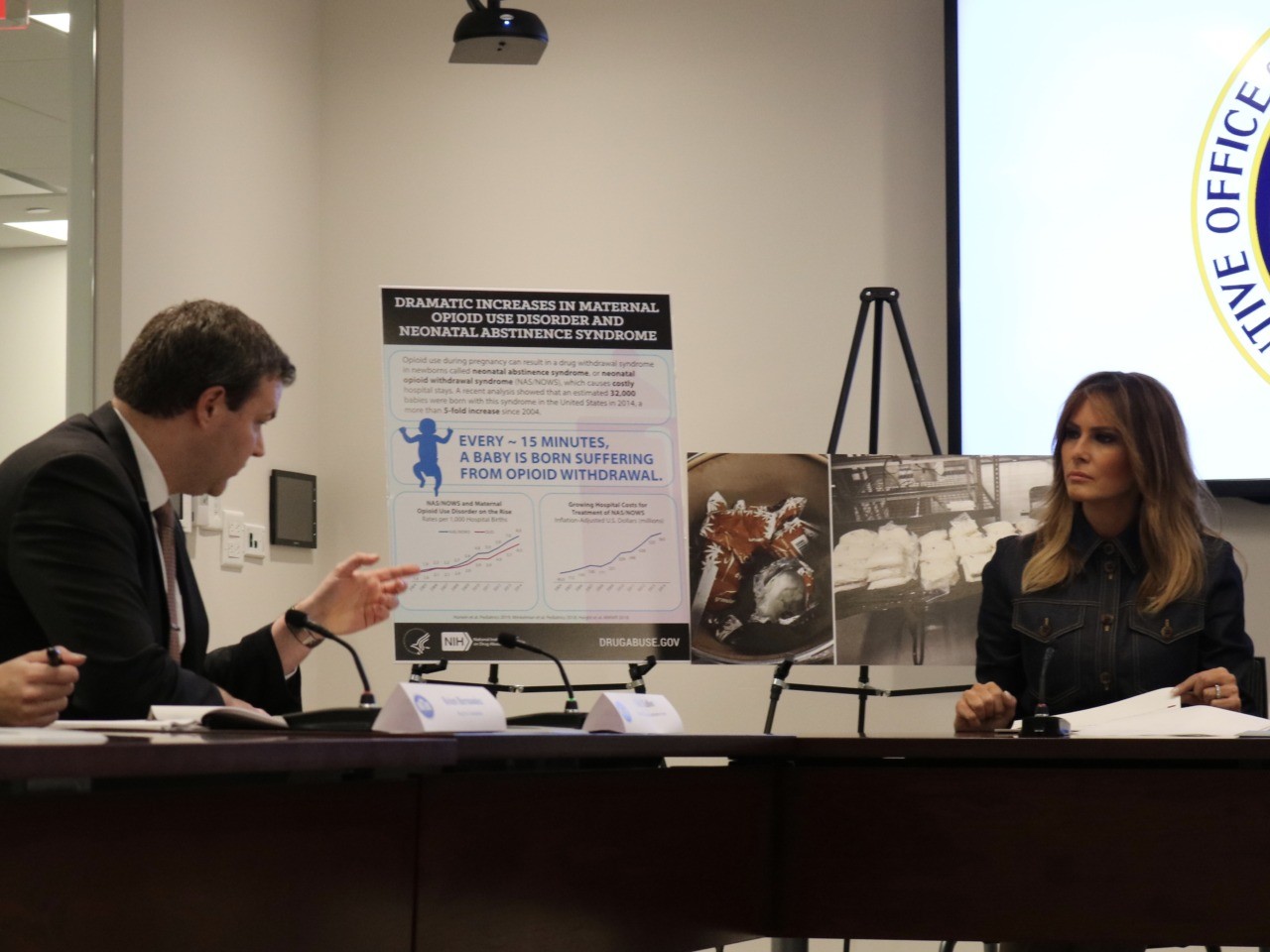 The first lady briefed on the routes for cocaine interdiction. (Michelle Moons/Breitbart News) 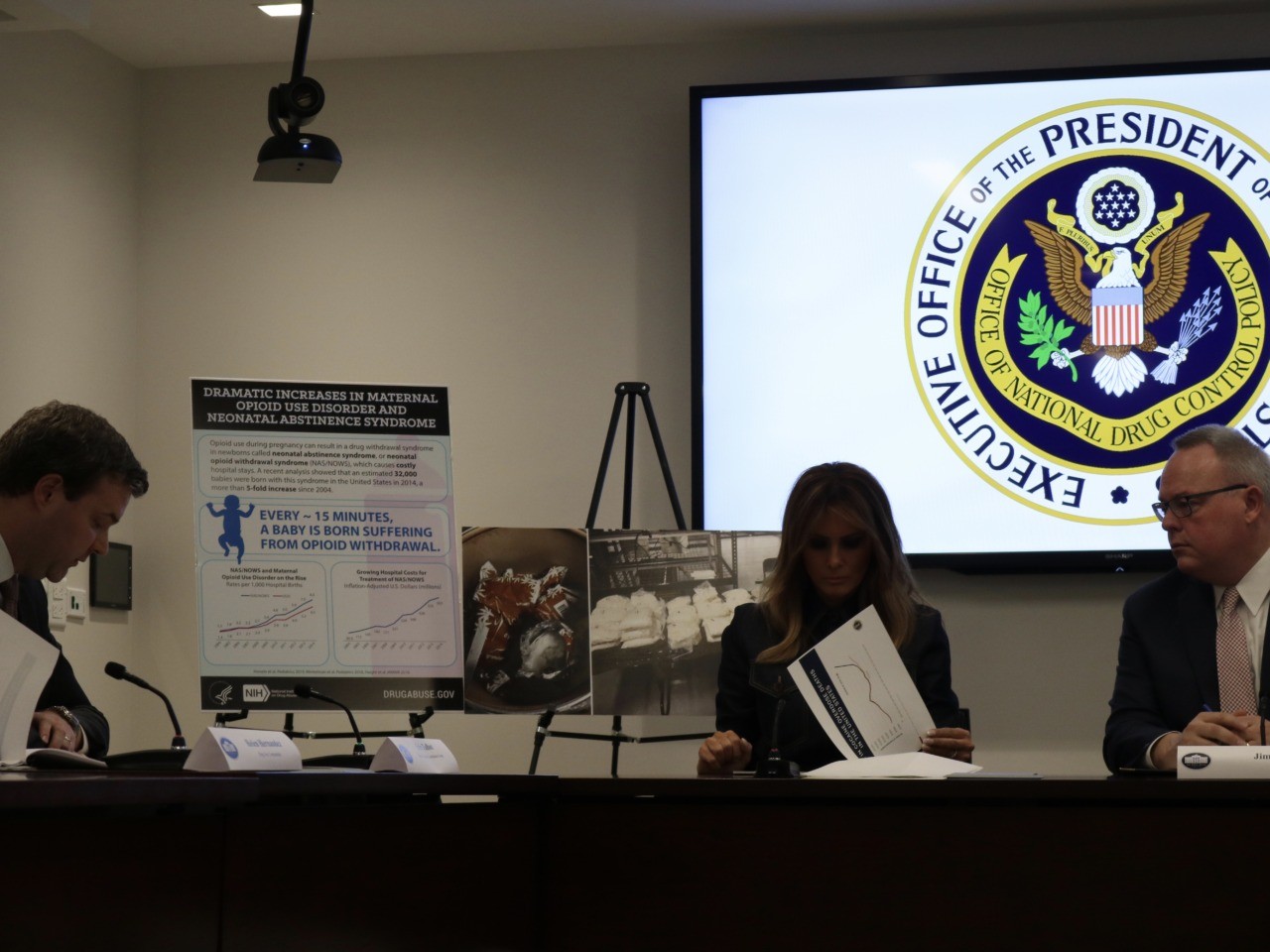 Office of National Drug Control Policy officials provided the first lady with slides on the state of the opioid epidemic. (Michelle Moons/Breitbart News)

Associate Director of the National Opioids and Synthetics Coordination Group Kemp Chester demonstrated a transformation in the balance of heroin and fentanyl overdose deaths that began in from 2015. It was then that a sharp increase in fentanyl-related deaths outpaced heroin and opium nearly two-to-one.

Fentanyl deaths hit 28,466 in 2017 compared to 15,489 heroin and opium deaths. Chester recognized nearly all heroin in the U.S. comes over the border from Mexico. 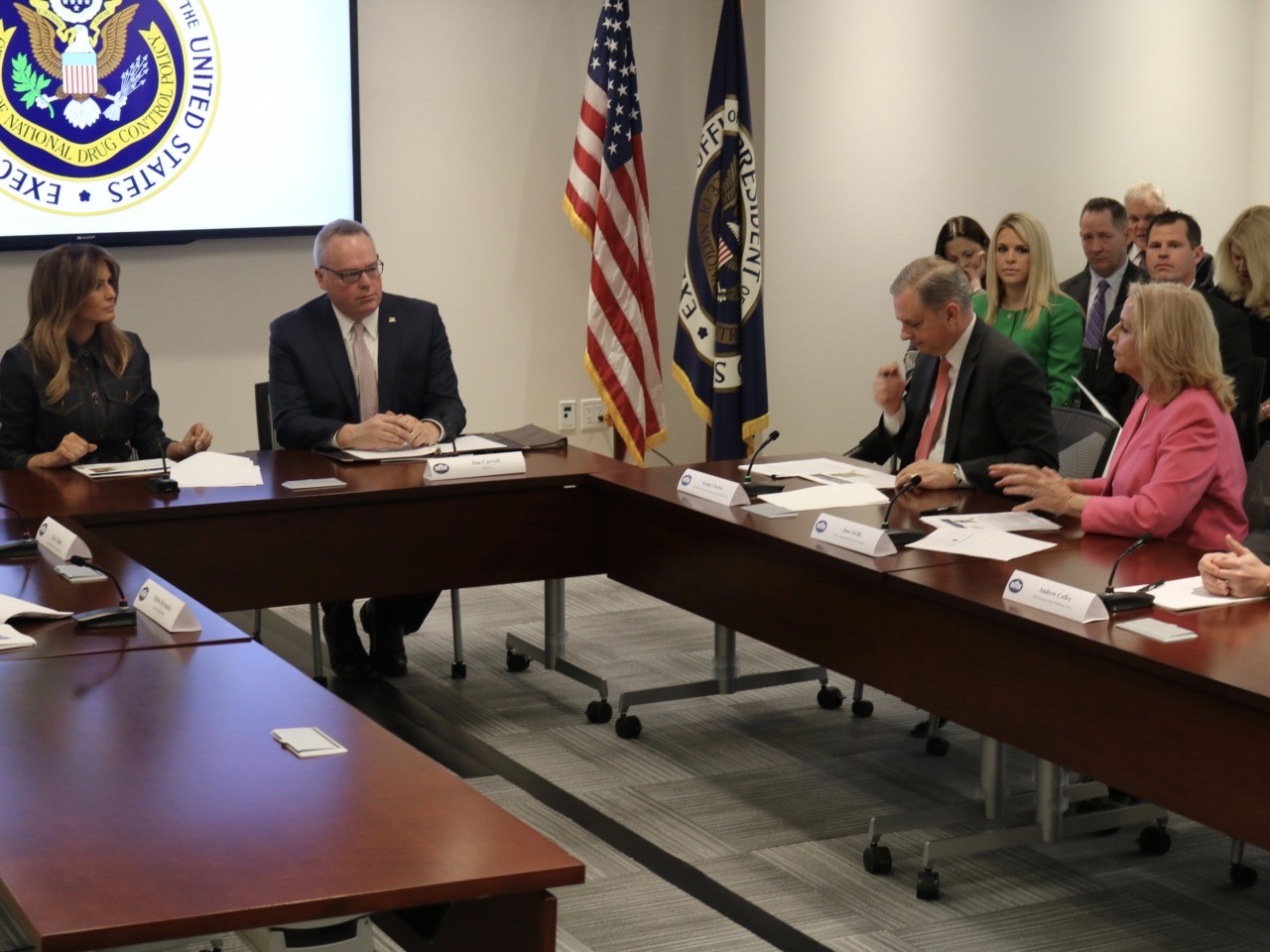 Fentanyl in lower quality form also comes across the southern border, while more pure forms of the drug largely come from dark web orders through the mail or commercial carriers, often from China. Chester explained the importance of U.S. Customs and Border protection canines in targeting and detecting fentanyl. 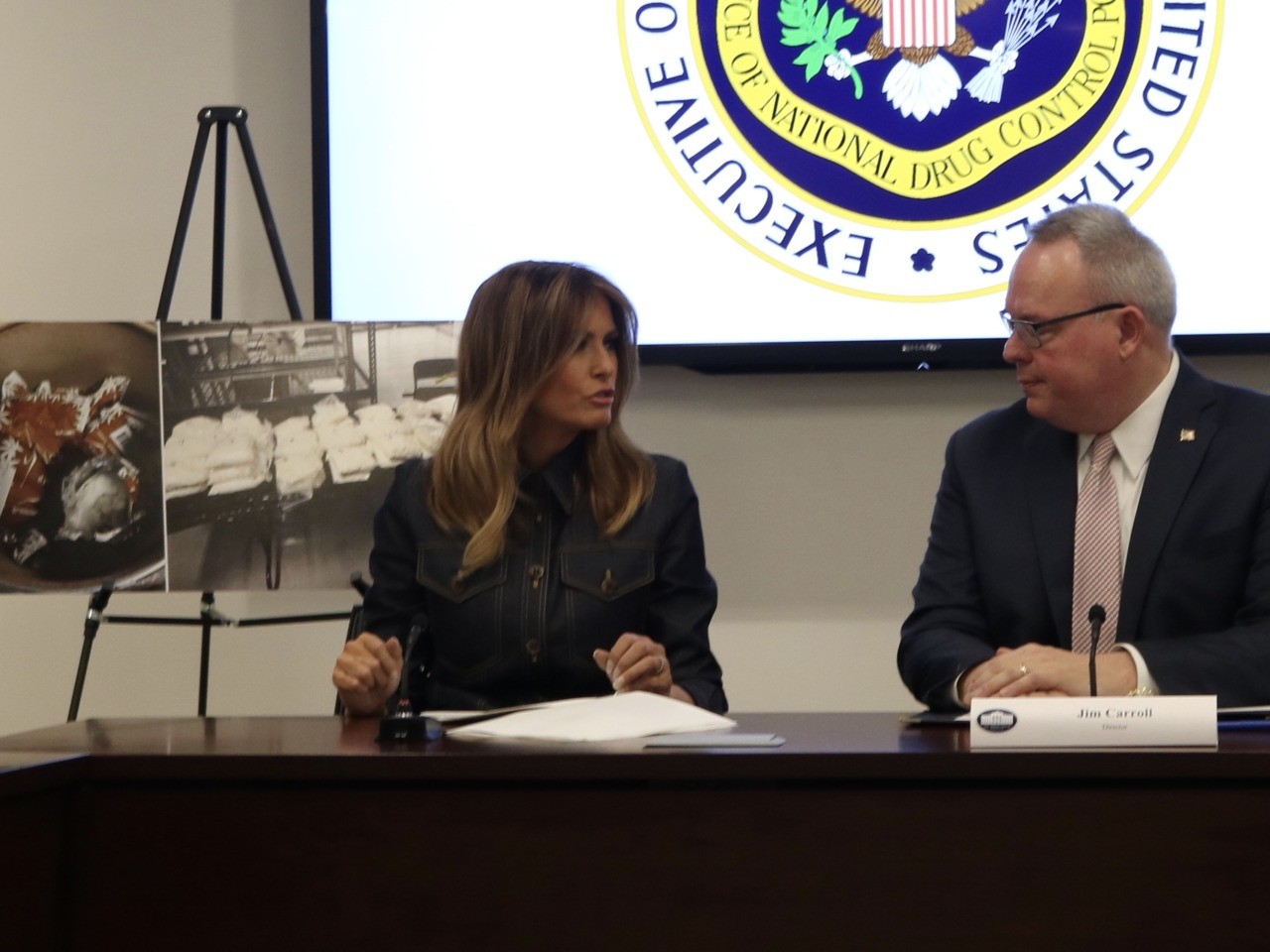 First Lady Melania Trump asks ONDCP officials for details of the opioid crisis and how the office is fighting it. (Michelle Moons/Breitbart News)

Chester warned of the continued increase in online orders of fentanyl streaming into the U.S. in months and years to come. He further warned of new varieties of synthetic drugs appearing. He cited a day in New Haven, Connecticut, when 70 young people at a park overdosed on a synthetic drug. 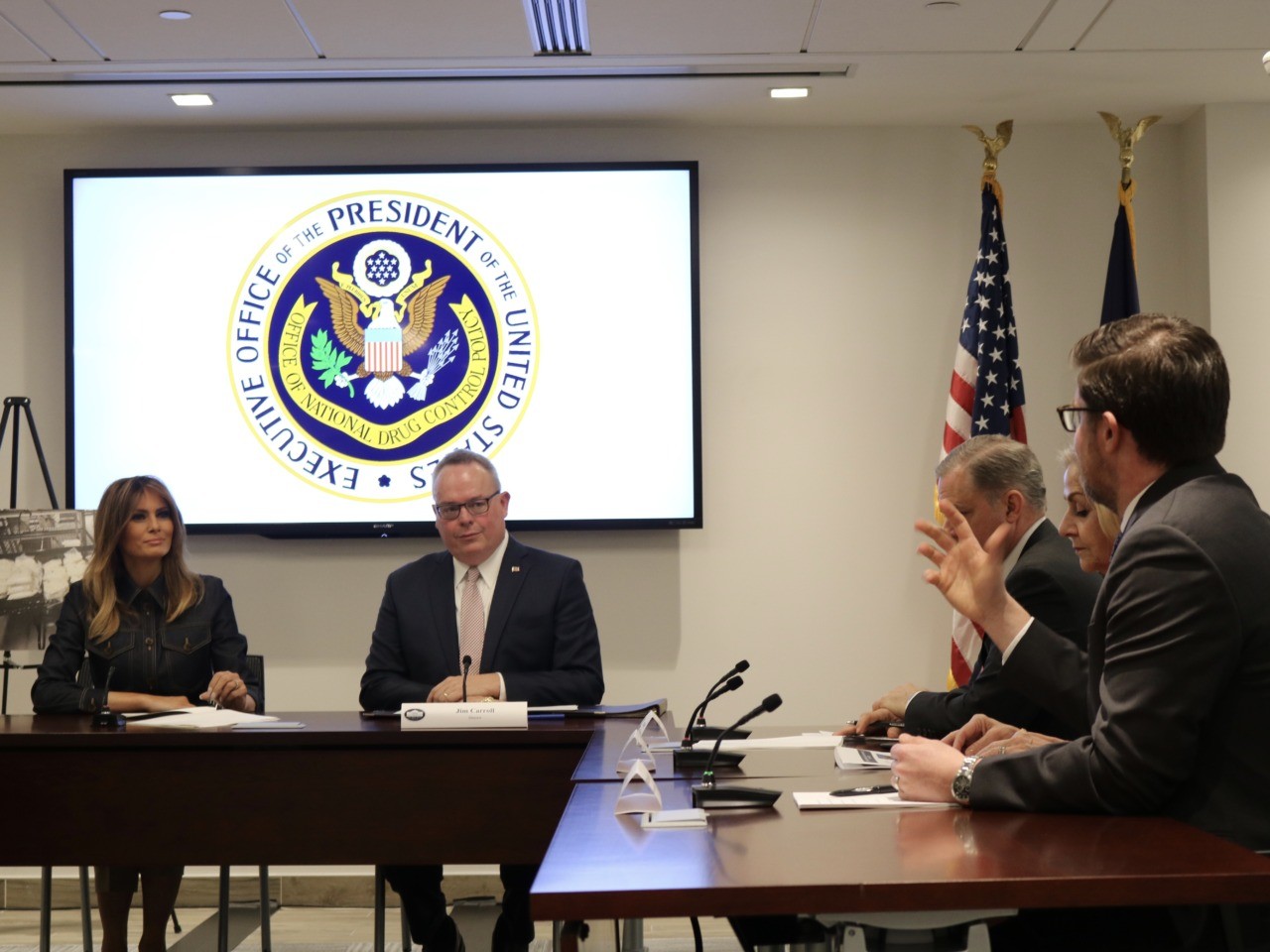