President Trump’s hint that he will increase legal immigration levels and a pending automation doomsday that lawmakers have yet to regulate threatens millions of America’s working and middle class workers.

This week, Trump reiterated for the third time in a few weeks that he believes the U.S. should be increasing already historic levels of legal immigration — where more than 1.2 million legal immigrants are admitted every year at the expense of American taxpayers who are forced to subsidize the scheme through depressed wages and fewer job prospects.

Trump has suggested that the country does not have enough Americans to fill high-paying jobs in sectors like the automotive industry. Nonetheless, Bureau of Labor Statistics data tell a different story, one that is nowhere near a so-called “labor shortage,” as the business lobby has continued to falsely claim.

There are at least 13 million working-age Americans who are either unemployed, not in the labor force but want a job, or who are working part-time jobs but want a good-paying full-time job.

Flooding our labor force with foreign workers is inconsistent with an America First economic plan. Both Congress and the White House have stated their intent that jobs only go to foreign guest workers if Americans cannot be found to fill them, but that’s not what’s happening. An excessive flow of foreign workers into the U.S. can only result in less jobs and lower wages for Americans.

An increase of already booming legal immigration levels would come along with impending doom for American workers in the form of job automation.

Research conducted by the Brookings think tank reveals that about a third of the U.S. workforce could be replaced by automation by 2030. Those most impacted by automation would be America’s working class in food service jobs, production jobs, transportation, and the construction industry. 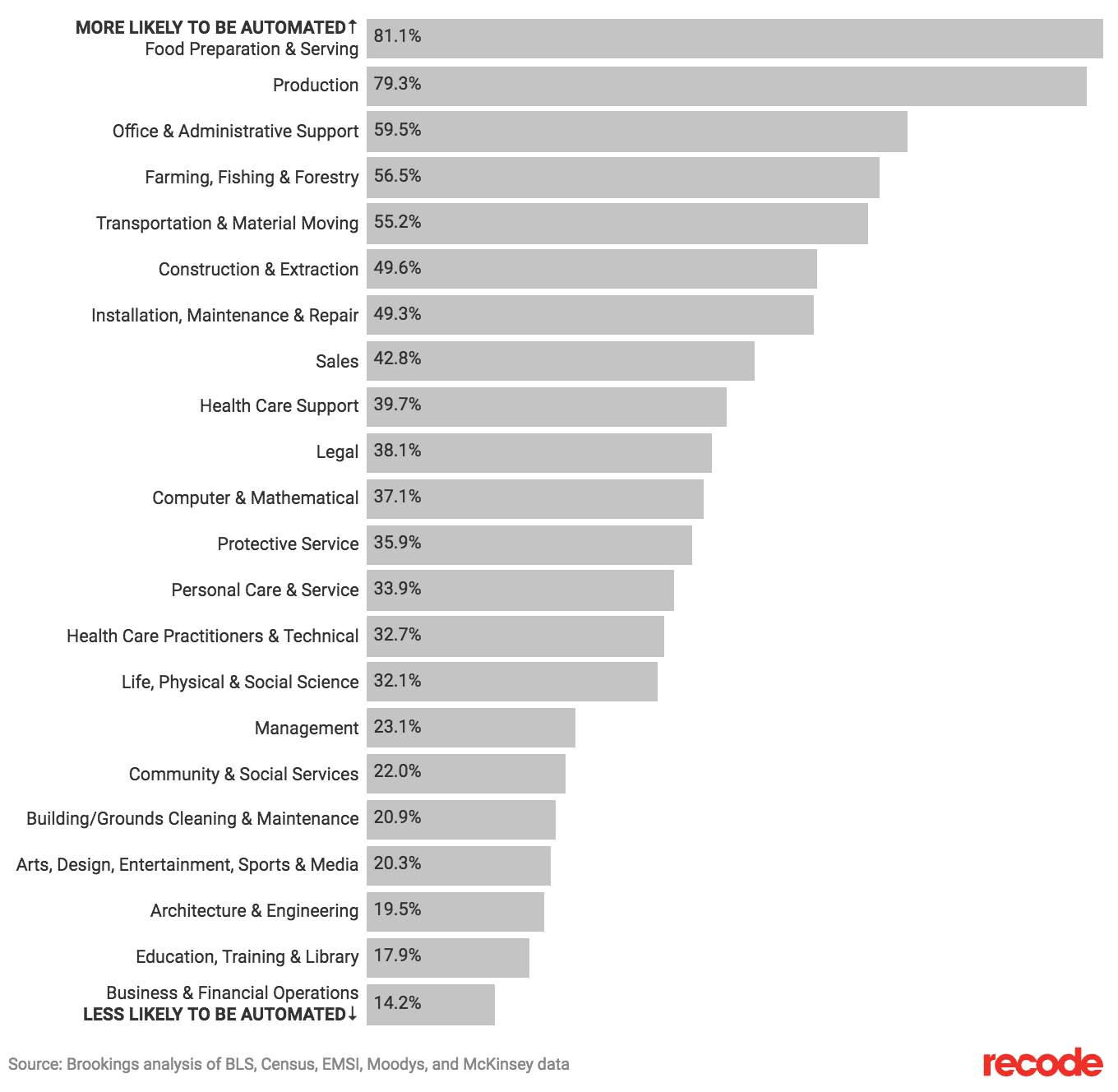 Across the country, unregulated automation threatens mostly American communities that are working and middle class, especially those in states like Alabama, Indiana, Ohio, Wisconsin, Nevada, Tennessee, Pennsylvania, Michigan, and Kentucky.

For example, a detailed interactive map by Recode reveals that in Alabama, more than half of the state’s counties could have major automation replacement of American workers. In counties like Clarke County, Jackson County, and Barbour County, automation could replace more than 50 percent of the area’s U.S. workers or some of the job tasks that they currently do.

In the northwest region of Ohio, automation threatens to eliminate more than half of all U.S. jobs or job tasks in every county. 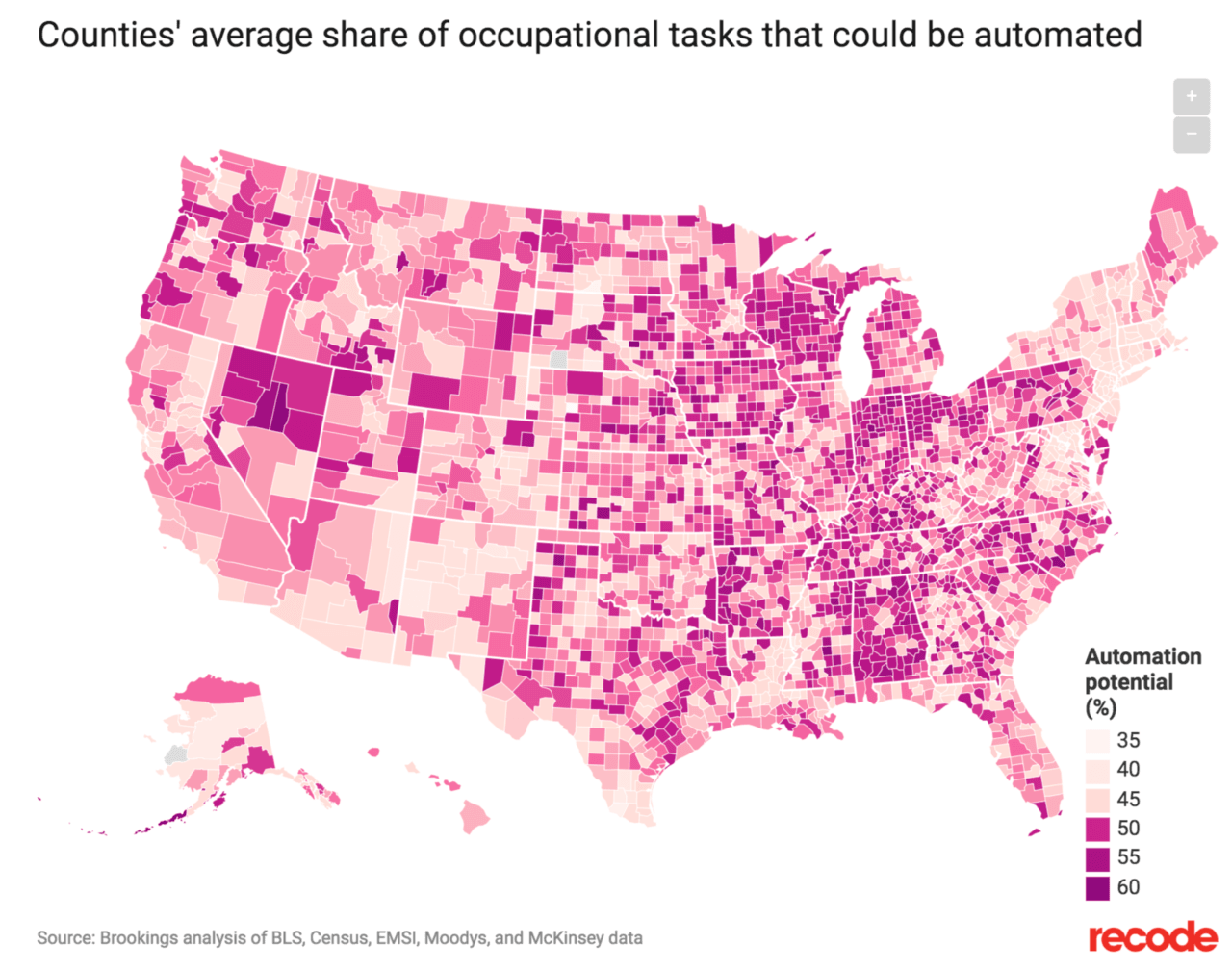 Americans are vastly opposed to being replaced by job automation. Economic libertarians have routinely touted their support for job automation, though such a replacement of American workers is extremely unpopular.

About 85 percent of Americans said they support the federal government putting restrictions on the types of jobs that employers can automate, like dirty and dangerous jobs, supporting an economic nationalist agenda when it comes to the issue, Pew Research polling has found.

Nearly 60 percent of Americans said the federal government should place limits on the number of jobs in which a business can replace a U.S. worker with a machine. About 70 percent of the country’s working class, those with or without a high school degree, agree that the mass displacement of American workers through automation should be stopped with regulation by the federal government.

In the last decade alone, the U.S. admitted ten million legal immigrants, forcing American workers to compete against a growing population of low-wage foreign workers. Meanwhile, if legal immigration continues, there will be 69 million foreign-born residents living in the U.S. by 2060. This would represent an unprecedented electoral gain for the Left, as Democrats win about 90 percent of congressional districts where the foreign-born population exceeds the national average.