It was a mere six weeks ago when Never Trump went after a group of boys, targeted a bunch of innocent kids, who were guilty only of displaying their support for President Trump by way of hat.

It was a mere six weeks when, in a show of solidarity with the establishment media, and through the weaponizing of Google-search infamy, Never Trump raced to their computers to lend a hand in annihilating the future of a group of high schoolers… because those high schoolers support the president.

It was a mere six weeks ago that America’s TrueCons, those who lord their moral superiority and Ivy League’d sobriety over us Deplorables, feverishly grabbed torch and pitchfork to lead a mob against children who had done nothing wrong … other than to ignore the sage wisdom of Never Trump.

And after the full video told the truth, and after the alternative media that Never Trump so despises disseminated that video with legitimate reporting, Never Trump told us, Oh, we are so very sorry. This is a teachable moment, a mistake that in no way defines who we are, for we are America’s principled TrueCons, the disciples of Ronald Reagan, those who bravely stand for ideals and conservative principle.

How many timed have we heard that from Never Trump?

I hope your ugly daughters get raped!

I trashed your dad to your face at my father’s funeral, and now I’m going to trash you for being gracious while I trashed you!

Let’s “put a bullet” in Trump!

You all deserve to die! 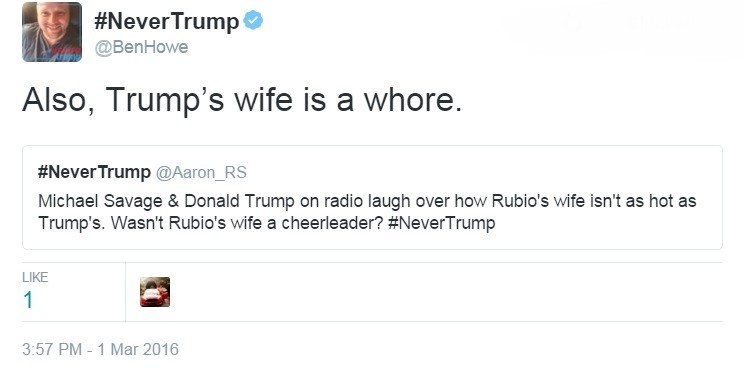 Oops, oops, oops, oops, oops, that’s not who we are. Don’t you understand, we are fighting for the decency Trump has destroyed, for the conservative ideals Trumptards have shunned to worship the Orange Bad Man; to return good, moral character to the GOP. But most of all we are here to conserve the conservatism… That is who we really are.

And who did they hire? A pro-abortion socialist named Molly Jong-Fast.

And what is one of her first assignments? To trash everyone at CPAC for the temerity to support the most conservative president in generations, and if that includes Trump supporters battling cancer, so be it; and if that includes holding the pro-life movement, those who praise Jesus, and the fight against socialism up for public ridicule, well, that’s okay too…

“How abortion after birth is immoral.” Umm, Charlie, umm, what???

First up is mr Glenn Beck who thinks socialism is very bad and then said something about an airplane filled with children.

Never Trump’s bitter attacks on Trump supporters long ago exposed them as so much worse than what they profess to hate (Trump picks on the powerful, not school boys). But still, in-between the vulgarity, misogyny, elitism, bigotry, support for Hillary Clinton, death wishes, rape wishes, and even the bullying of school children, the nihilistic peacocks of Never Trump sought to assure us their fight is really about principle, about policy and decency and all things Ronald Reagan, about how their moral beliefs will not allow them to support Trump, but they still believe in the cause…

And now these snake-bitten crybabies, these spiteful sore losers are openly jeering the fight against socialism and infanticide.

Now they’re attacking the pillars of conservatism, the foundation and animating principles of everything they claim to care about: the free market and the unborn.