Candace Owens hosted a Blexit — or black exit from the Democrat Party — event on Sunday in Richmond, Virginia, where hundreds of people gathered to hear from Owens and several other featured speakers, including Breitbart News Entertainment Editor Jerome Hudson.

Hundreds of eager event attendees wearing MAGA hats and Blexit t-shirts gathered at The National Theater in Richmond, Virginia, on Sunday, to attend the Blexit rally. This was Owens’ second Blexit event of the year, the first having been held in Los Angeles, California, in January.

Breitbart News was present at the event and had the opportunity to speak with attendees and speakers. While waiting in line to get into the event, one young attendee, Chandler, told Breitbart News he believes he has “awoken earlier than most people” due to having “fantastic parents.”

“I had fantastic parents that allowed me to, instead of being indoctrinated — do my own research,” said the young activist, “and when I did my research and found these things about the Democrat and the Republican Party, I was angry — because my people had been lied to for generations.”

“And I just didn’t know what to do with it, but then, I went to YBLS, and my skills were cultivated and activated, and after that, I just wanted to help people — I wanted to free my people, both Latino and black, and create a better future for my people.”

“I get a lot of flack from people,” said another event attendee, Russell, “They’ll see my [Blexit] shirt and ask me about it, and when I tell them what it’s all about — they’ll look at me like I’m crazy — like, ‘don’t you know that you’re not supposed to be thinking that way?'”

Russell added that he has a “Trump 2016” sticker on his car, and is often questioned when getting out of his car. “They’ll see me get out of the car, and they’ll go, ‘Is that your car?’ — ‘You’re a Trump supporter?'”

“It’s just crazy,” continued the Blexit attendee, “It’s just amazing that I actually have to justify — the only reason they ask those questions is because of the color of my skin.”

“I’ve always been a supporter of the Democratic Party,” said a third attendee, Reginald, “but now — since I’ve started to now do my own research and find out that the Democratic party is not for minorities, of any race, whether it be black, Latino, Asian.”

“Now I’m getting the bash for making my own decision and being a free thinker.”

The event-goers waiting outside of The National Theater did not look like the people who the establishment media would likely want you to believe are conservatives. In fact, there was no mainstream media outlet present to cover the Blexit event.

One speaker was Breitbart’s own entertainment editor, Jerome Hudson, who encouraged attendees to harness their power as citizen journalists, echoing the sentiments of the news outlet’s late founder, Andrew Breitbart.

“Our founder, Andrew Breitbart, famously said that politics is downstream from culture,” said Hudson to his audience, “That’s why your voice on social media is so important. You have a megaphone in your pocket that empowers you to fight back.”

“Long before the social media movement in America exploded, Andrew Breitbart used to hold up his phone at rallies just like this one and tell the audience to harness their power as citizen journalists. See, you are more powerful than you realize.” 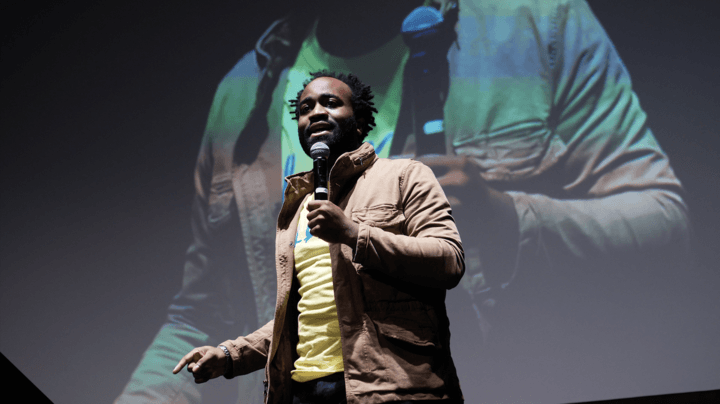 Breitbart Entertainment Editor Jerome Hudson encouraging attendees to use the power of their cell phones to be citizen journalists. (Matthew Perdie / Breitbart News)

Owens announced her “Blexit” project last October, aimed at leading “the black exit from the Democrat Party,” in which she vowed to take her mission of exodus to cities controlled by Democrat politicians.

This made the state of Virginia an obvious choice for hosting the second Blexit event, considering recent scandals involving the state’s governor, Ralph Northam, and attorney general, Mark Herring.

In January, Northam had been exposed on video casually endorsing infanticide, and then, days later, the governor’s medical school yearbook photo was leaked to the public, displaying one individual in blackface and another in a Ku Klux Klan outfit.

While the reaction to Northam’s revealed stance on infanticide was — in comparison to his leaked yearbook photo — virtually nonexistent, (despite abortion having a disproportionate effect on the black community), Northam’s yearbook photo, on the other hand, elicited a response of public outrage across the country, as well as calls for his resignation.

Governor Northam has since successfully dodged calls for his resignation.

Owens told Breitbart News she had chosen Richmond, Virginia, to shine a light on “the hypocrisy of the left.”

“The problem is that there’s not enough of a reaction,” said Owens, “What we’re seeing down here is that they’re trying to just gloss it over, say it’s okay, and then we’re supposed to all go back to normal.”

“This, of course, would never be allowed on the conservative side,” added Owens.

Owens also noted Northam’s stance on late-term abortions, adding, “This is a perfect time to talk to black America, Hispanic America, and all of America, of the hypocrisy of the left, and the results of these progressive policies, which are always regressive for communities that are afflicted by them.”

“The idea that a sitting person in Congress can refer to a black conservative as a token or say that they are participating in tokenism, that’s a racial slur,” said Owens of Ocasio-Cortez’s recent tweet in reference to Trump staffer, Lynne Patton.

“This is what I mean when I say that we give a pass to and an okay to people on the left.” 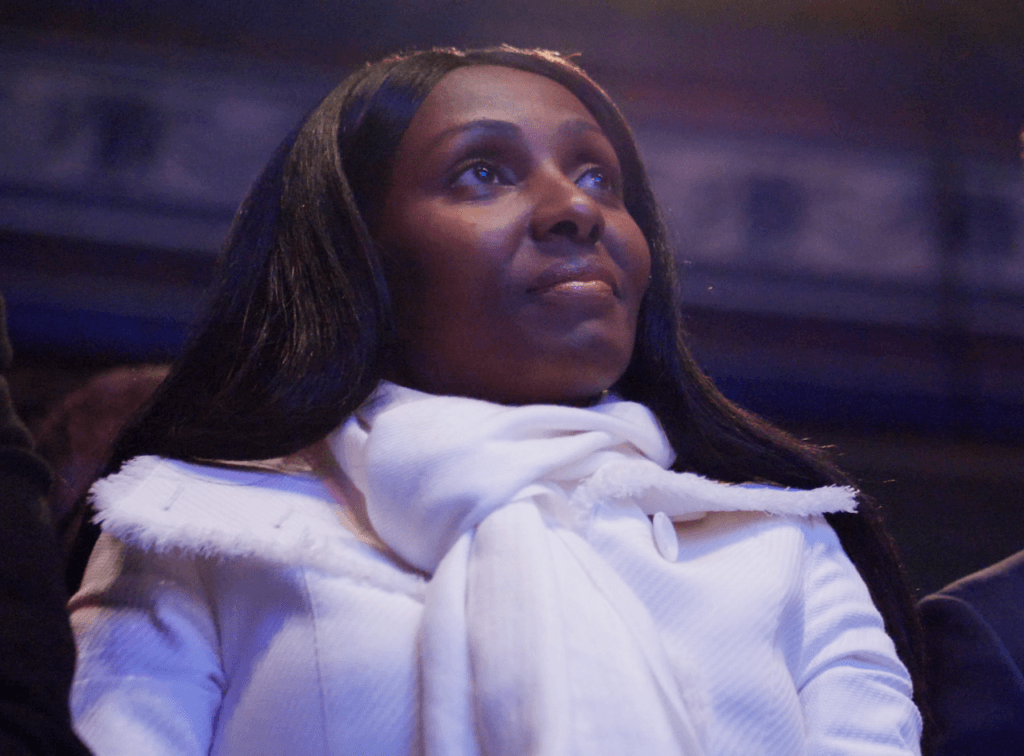 Blexit attendee watches attentively as she waits for the next speaker to arrive on stage. (Matthew Perdie / Breitbart News) 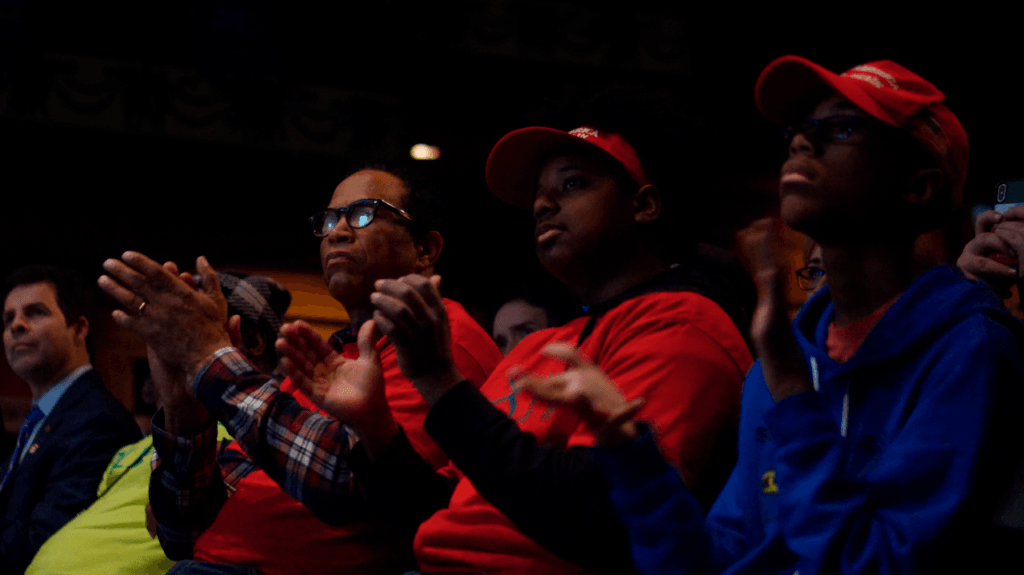 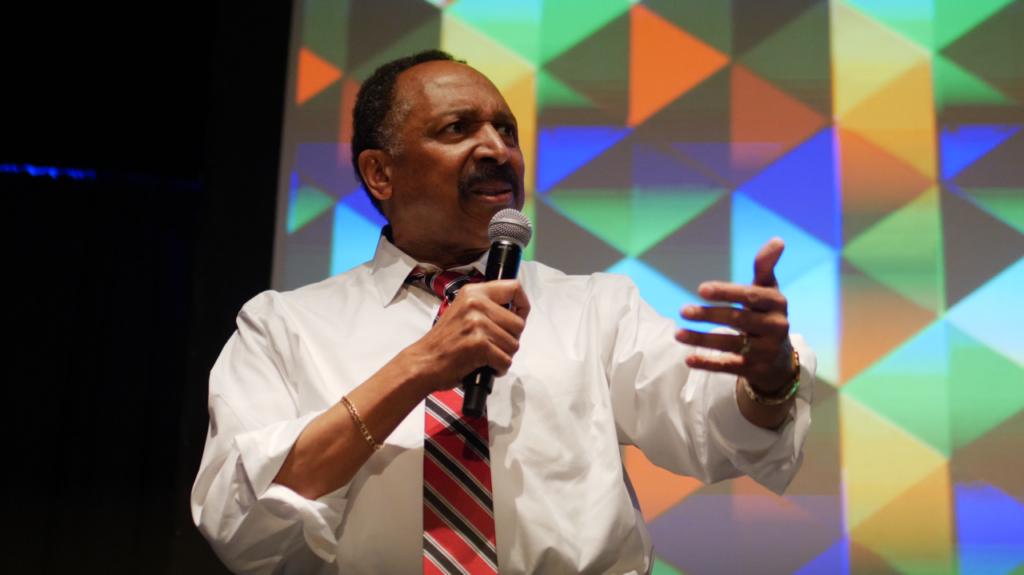 E. W. Jackson, who was Northam’s opponent for lieutenant governor of Virginia in 2013, added that Northam had once actually refused to shake his hand.

“These liberals really think that they have a free pass to do and say whatever they want because they are liberals, when in fact, they are the most condescending, paternalistic, racist individuals in this country,” said Jackson, as the crowd roared with applause and cheers in concurrence.

“I want to tell you young people something,” added Jackson, “don’t believe the socialist lie that you’ve gotta have government — you can do anything you want to do because this is the greatest nation on the face of the earth for fulfilling your God-given potential.”

The Blexit audience responded with a standing ovation and chants of “USA!”

“And don’t you let anybody tell you anything different,” said Jackson, as the crowd roared, “That’s right! USA!”