The illegal migration of “family units” and “unaccompanied alien children” spiked after former President Barack Obama signed off on the “DACA” amnesty and the Flores court order, according to a graphic used by the chairman of the Senate Homeland Defense Committee.

Committee chairman Sen. Ron Johnson (R-WI) touted the jarring graphic by printing it on paper cups used by the committee members. The graphic contradicts claims by Democrats that the huge wave of Central American economic migrants are really refugees from a humanitarian disaster caused by crime and crop failures in Central America.

Officials expect almost one million Central American migrants in the 12 months prior to October 2019. The migrant wave includes hundreds of thousands of people in “family units.” These units consist of adults who bring youths and children to help trigger the border catch-and-release loophole.

The primary catch-and-release loophole is the Flores court order because it requires border agencies to release migrants within 20 days if they bring children. Once released, the migrant adults take jobs in American workplaces and their children are sent to the schools used by the children of blue-collar Americans.

The Flores decision “has been the essential driver, frankly, for the increase in family units,” said Kevin McAleenan, the acting secretary of the Department of Homeland Security in a May 23 committee hearing. He continued:

That certainty, that knowledge, that they will be allowed to stay in the US. indefinitely, pending a court [asylum] proceeding that could be years away … is a huge draw. Smugglers have capitalized on that. They’re advertising that fact. We hear that routinely from our interviews with families.

The 2015 extension of the 1993 Flores judgment was accepted by the Obama administration, even though it requires border agencies to release migrants within 20 days if they bring children. Obama’s legal team could have fought the decision by filing appeals with higher courts, but it instead signed an agreement to implement the decision.

Under policies set by judges, the 2015 agreement by Obama, ACLU activists, and the judge binds President Donald Trump, even though he did not approve it, and even though the Supreme Court did approve the extension: 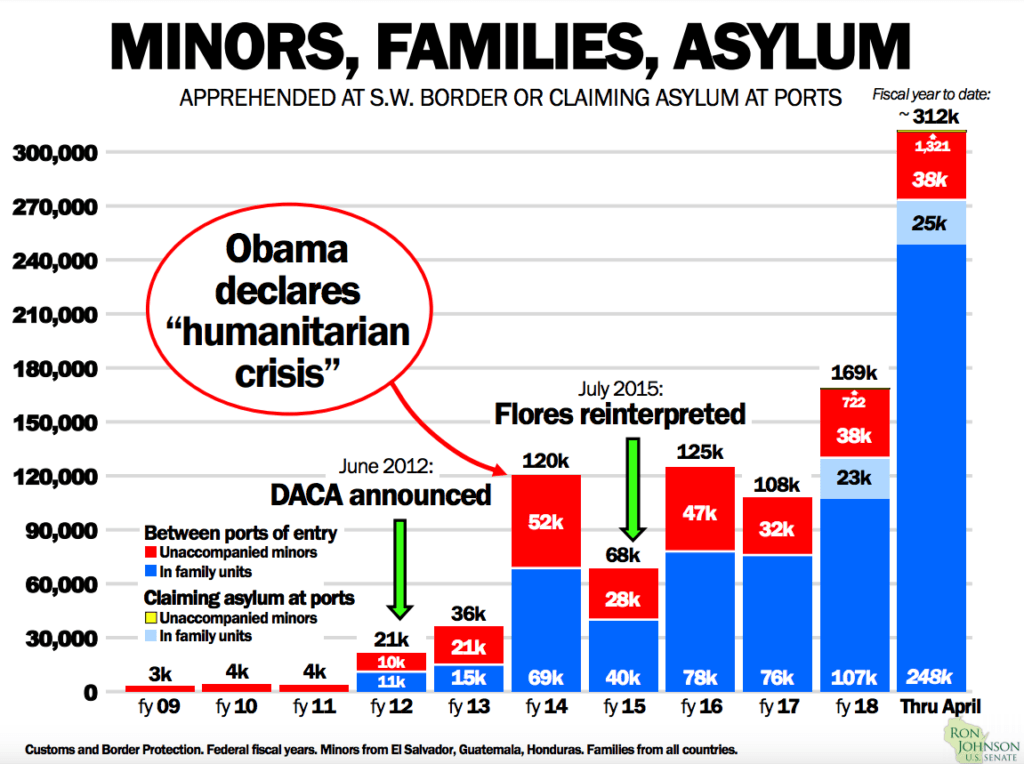 Obama’s 2012 DACA amnesty offered a sanctuary from deportation, plus work permits and Social Security Numbers, to roughly 800,000 migrants who had been smuggled over the border by their parents. The giveaway is legally shaky, but it prompted many other illegal migrants to get their children delivered from Central America by smugglers to U.S. border agencies, which then passed the children to the parents.

Democrat legislators have refused to reform the border rules, ensuring that 100,000 migrants — including 40,000 children — walked over the border in April 2019, into the nation’s job sites and schools.

However, Trump’s deputies are preparing a regulation that would allow them to detain migrants with children for more than 20 days.

But Obama holdovers in the agencies have slowed the regulation. The Flores requirement that state officials set up a health and safety inspection process for family detention centers has also delayed the regulatory fix.

Democrats say the migration is a humanitarian crisis but deny their role in creating the disaster, which is now emptying parts of Guatemala:

The US govt's appetite for more cheap labor is distorting Central America's economy by encouraging & subsidizing migration instead of boosting local investment & job-growth via trade. https://t.co/ox747dO6qS

Trump’s deputies are also developing other programs to stop the flow, such as the “Remain in Mexico” program, which prevents migrants from getting jobs while they wait for court hearings. If denied jobs, the migrants would not be able to pay the travel costs owed to the Mexican cartels and will not make the trip:

Trump's 'Remain in Mexico' program is helping ensure that pregnant migrants cannot cheat the legal asylum process by birthing a child in the U.S. Pro-migration groups are aghast. https://t.co/Ry4FPDn5Wi

This year’s inflow of one million illegal migrants from Central American is only a small slice of the immigration economy.

This policy of flooding the market with cheap foreign white-collar graduates and blue-collar labor shifts also enormous wealth from young employees towards older investors even as it also widens wealth gaps, reduces high-tech investment, increases state and local tax burdens, and hurts children’s schools and college educations. It also pushes Americans away from high-tech careers and sidelines millions of marginalized  Americans, including many who are now struggling with fentanyl addictions. The labor policy also moves business investment and wealth from the heartland to the coastal cities, explodes rents and housing costs, shrivels real estate values in the Midwest and rewards investors for creating low tech, labor-intensive workplaces.

Nancy Pelosi is promising to raise wages via gov't socialism, but Trump's "Hire American" immigration/labor-supply policy is nudging wages up by 3-4 percent a year. Yes, politicians competing over rival wage-raising policies would be a great thing. https://t.co/ThXHOAr2NZ