The New York Times‘ Thomas Edsall highlights in his weekly column the growth in support among white liberals over the last two decades for endless illegal and legal immigration to the U.S., a central motivating factor for why elected Democrats have abandoned their past views and favor the donor class approach to immigration and national borders.

In 1993, then-Sen. Harry Reid (D-NV) called for an end to granting American birthright citizenship to the U.S.-born children of illegal aliens, saying “no sane country” would allow such a policy.

“It is clear that there is a growing public dissatisfaction with our nation’s immigration policies,” Reid said at the time. “The American people are demanding reforms that will restore order to an immigration system they perceive to be out of control … these are not racist people who are raising this issue.”

Two years later, Civil Rights icon Rep. Barbara Jordan (D-TX) released her detailed recommendations that would have cut legal immigration levels in half and nationally banned employers from hiring illegal aliens. The comprehensive “immigration in the national interest” plan was primarily to stop the mass importation of low-skilled foreign workers to the total of about 1.2 million every year.

“The commission finds no national interest in continuing to import lesser-skilled and unskilled workers to compete in the most vulnerable parts of our labor force,” Jordan said. “Many American workers do not have adequate job prospects,” Jordan said. “We should make their task easier to find employment, not harder.”

Warren’s immigration plan would actually increase legal immigration levels beyond the already 1.2 million legal immigrants that are imported every year. She has also promised to bring at least 700 percent more foreign refugees to the U.S.

Research by Georgia State University’s Zach Goldberg and data from the Chicago Council on Global Affairs reveals that the Democrat Party’s move towards a mass immigration platform is driven primarily by white liberals. 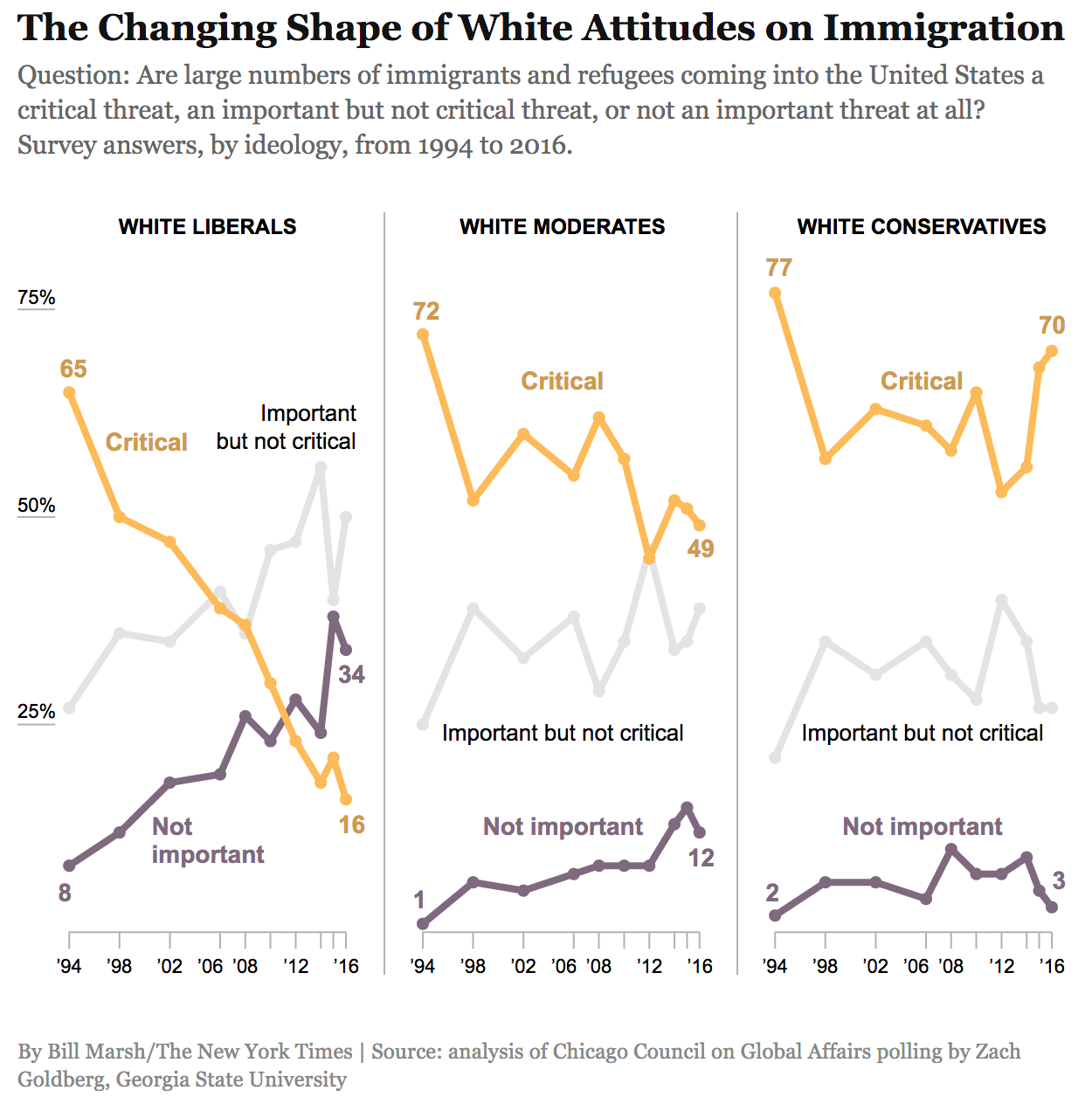 In a post for Tablet Magazine, Goldberg detailed how white liberals have transformed the Democrat Party’s platform to one that accepts endless legal immigration, saying:

For instance, between 1965 and 2000, the percentage of white liberals preferring increased immigration levels never deviated far from 10%. From the mid-2000s to roughly the end of President Obama’s term in office, this figure gradually ascended into the 20-30% range. As of 2018, it sits at over 50%. [Emphasis added]

Goldberg’s analysis finds that black Democrats and Asian Democrats are much more likely than their white Democrat counterparts to support restricting immigration and opposing diversity as a national identity.

“Consider, for instance, that black and Asian Democrats and liberals are significantly more supportive of restrictive immigration policies and less positive toward racial/ethnic diversity than their white counterparts,” Goldberg writes. “… and as woke liberals play a leading role in party politics, the Democrats, who are increasingly defined by their embrace of diversity and progressive stances on issues of racial justice, appear to do so, at least partly at the direction of a small white elite.”