President Donald Trump has met one of his key election promises and confirmed the U.S. will definitely withdraw from the Paris climate agreement.

He made the announcement Wednesday night at an energy conference in Pittsburgh, Pennsylvania, denouncing the agreeement as a bad deal and lauding his pro-fossil fuel policies that make the U.S. an independent energy superpower.

Trump touted surging U.S. natural gas and crude oil output and his efforts to roll back regulations on energy industries as underpinning his administration’s intention to pull the United States from the 2015 international climate agreement.

“The Paris accord would have been shutting down American producers with excessive regulatory restrictions like you would not believe, while allowing foreign producers to pollute with impunity,” said Trump, who shared the stage with dozens of workers wearing hard hats.

“What we won’t do is punish the American people while enriching foreign polluters,” he said, adding: “I’m proud to say it, it’s called America First.” 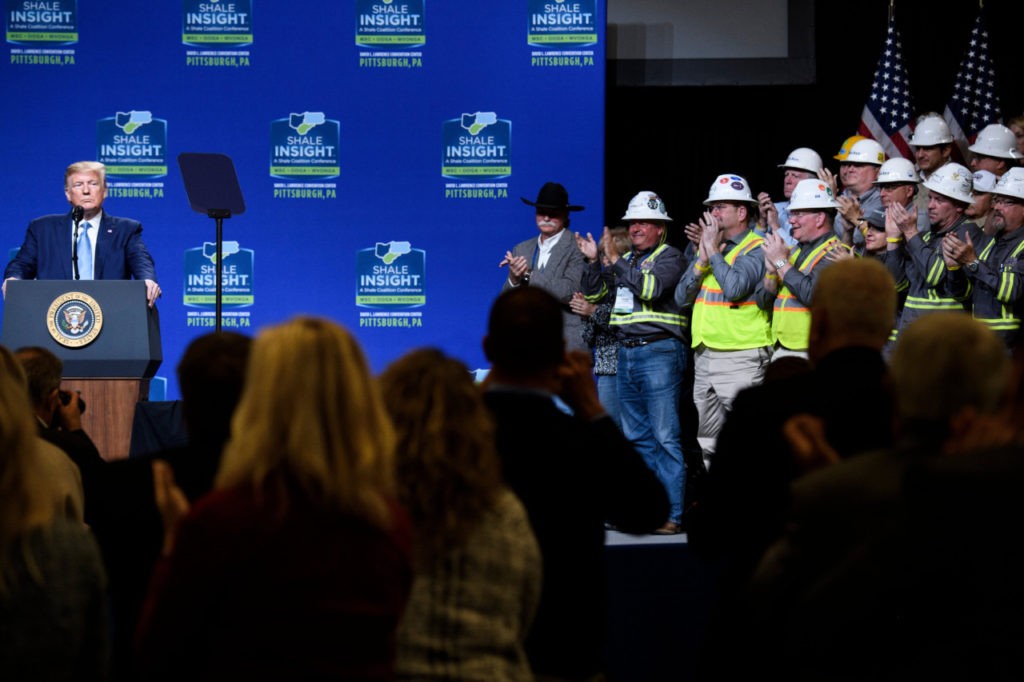 The first day he can officially start the process has not yet arrived. According to the terms of the agreement, Trump can submit a letter on Nov. 4 to the United Nations to start the clock to withdraw the United States formally from global climate pact.

Withdrawing takes one year, which would mean the United States would leave the agreement one day after the Nov. 3, 2020, presidential election.

As Breitbart News reported, as far back as June, 2017 Trump said he was looking forward to exiting the agreement.

The president spoke then of following through on his commitments to the American people.

“In order to fulfill my solemn duty to protect America and its citizens, the United States will withdraw from the Paris Climate Accord,” Trump declared.

Compliance with the accord could have cost the U.S. “as much as 2.7 million lost jobs by 2025 according to the National Economic Research Associates,” said Trump. “This includes 440,000 fewer manufacturing jobs — not what we need…”

Leaving the Paris climate agreement was a key part of Trump’s message as he campaigned for the presidency in 2016.

Former President Barack Obama unofficially entered the United States into the accord, which was adopted in December 2015 as the United Nations Climate Change Conference came to a close.