Backers of Louisiana Democrat Gov. John Bel Edwards are playing the race card against supporters of President Donald Trump, as the contest between Edwards and Republican Eddie Rispone heats up in the final week plus of the campaign.

Edwards’ allies are pushing a narrative that supporting Rispone is akin to being a racist like infamous white supremacist David Duke.

New radio ads launched this week by the Black Organization for Leadership Development (BOLD) urging people to vote against Rispone and for Edwards by claiming that Rispone and his highest-profile supporter President Trump are racists.

“Y’all remember that sickening feeling you got when you woke up and realized that Donald Trump was elected president? The nightmare is happening again—what is the difference between David Duke, Eddie Rispone and Donald Trump? The only difference is that Eddie Rispone will be governor if you do not stop him,” the BOLD ad narrator New Orleans City Councilman Jay Banks says in the ad.

“These people are telling you every day they do not care about you or anyone who looks like you,” Banks continues. “First it was the Muslims, then it was the Hispanics. Do you have any doubt what ‘Make America Great Again’ really means? Go and vote against hatred. Go and vote for your family and the people you care about. Go vote for John Bel Edwards.”

Edwards and Banks are particularly close allies. In fact, in 2017, Edwards went out of his way to publicly endorse Banks and praised him effusively.

“You all know what a quality individual he is and what a good job he will do in New Orleans, because, quite frankly, you may not think there’s much tie-in between the governor of the state of Louisiana and a district councilman in New Orleans,” Edwards said of Banks. “But the truth is, it takes teamwork at all levels. … I’m excited to be here and support Jay and his candidacy for Council here in New Orleans.”

This radio ad comes as door hangers making the same case—that Trump, Rispone, and their supporters are racists—have appeared throughout Louisiana in the black community.

The door hanger ads on one side show photoshopped pictures of Rispone, Trump, and former Louisiana Gov. Bobby Jindal collaged together with a photo of Duke. “Eddie Rispone stands with Donald Trump & David Duke,” text under the photoshopped collage reads. “Our turnout was under 38% in the primary. Vote early Nov 2 to Nov 9.”

On the book of the door hanger ad, it lists out several “facts” about Rispone—all of which are untrue.

The first one, which is obviously false because no governor could do this even if he wanted to and Rispone has not said any such thing, says that Rispone will if elected “take away your healthcare and freeze Medicaid enrollment.” 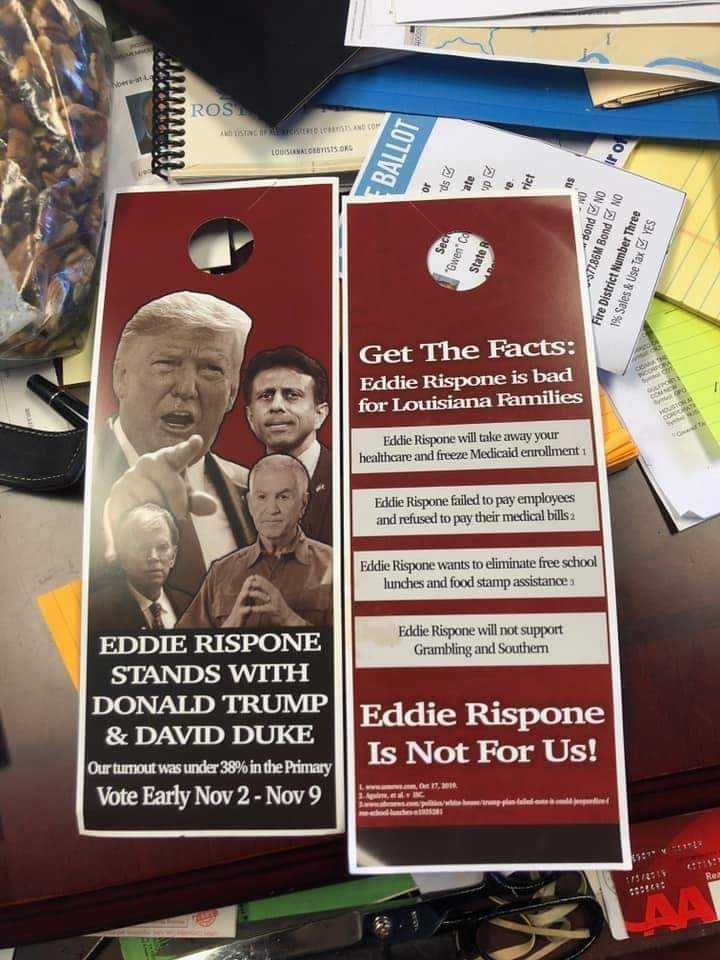 The second one falsely rips Rispone, a businessman before he decided to run for office, for having “failed to pay employees and refused to pay their medical bills.”

The next one falsely claims that Rispone would take away voters’ kids’ school lunches. “Eddie Rispone wants to eliminate free school lunches and food stamp assistance,” the ad claims. Again, no governor has the ability to do this—and these are federal programs anyway, so they come from Washington, D.C., not from the state of Louisiana. 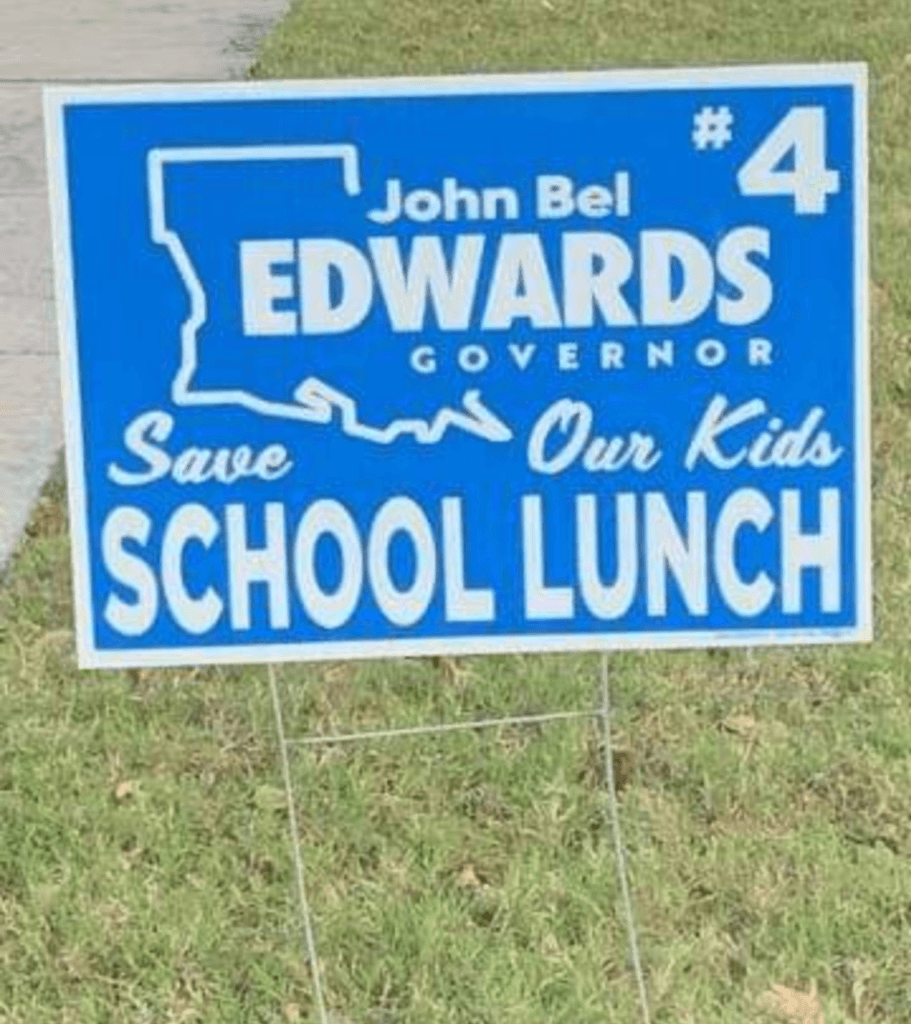 Pro-Edwards yard signs touting that same lie on school lunches have popped up around Louisiana too, urging people to support the Democrat governor in order to “Save Our Kids School Lunch.”

It is unclear if Edwards’ campaign itself, or some other outside group like BOLD or another one supporting Edwards, rolled out these ads via door hanger and yard sign as they are unlabeled as to who is paying for them.

Rispone is crying foul about the race-baiting ads from Edwards’ allies. According to a report in the Advocate, a Louisiana newspaper, the GOP gubernatorial candidate called Edwards’ team’s race-baiting ads “disgusting” and ripped Edwards and his pals for “playing the race card again.”

“They’re comparing Donald Trump and me to David Duke, that’s how low they will stoop to win this race. It’s incredible,” Rispone said, adding: “Nothing could be further from the truth than me being a racist.”

Rispone has even launched radio ads of his own exposing the Edwards team’s exploitation of race to try to win the election.

“How desperate is liberal career politician John Bel Edwards?” a narrator says in the Rispone radio ad. “So desperate that instead of denouncing radical leftwing attacks on Eddie Rispone and Donald Trump, he’s relying on them. Just listen.”

Then the ad plays the entire Banks BOLD ad that Edwards is using to try to win.

“John Bel Edwards–too weak to stop these hateful attacks,” the narrator concludes. “Too cowardly to condemn them. John Bel Edwards, too liberal for Louisiana.”