It is not clear why they have not been included, or whether they will be called to testify publicly in future. Neither of the two witnesses were on Republicans’ proposed list; they were called by Democrats behind closed doors.

One witness, Catherine Croft, the special adviser at the National Security Council (NSC) for Ukraine negotiations, offered at least two pieces of evidence that tend to help Trump’s argument that he did nothing wrong by asking the Ukrainian president to investigate election interference in 2016 and former Vice President Joe Biden’s past conflict of interest regarding his son, Hunter Biden, who served on the board of Burisma, a Ukrainian fossil fuel company.

First, Croft testified that the hold on aid to Ukraine this past summer was not the first. In fact, the White House had held up military aid in late 2017 — partly because of concern about antagonizing Russia (which was the reason the Obama administration had declined to provide military aid), but also because of general concerns about corruption.

In fact, Croft testified, Trump had rebuked then-Ukrainian President Petro Poroshenko in front of his delegation:

Second, Croft testified that the Obama administration had been aware of concerns about Hunter Biden and Burisma: 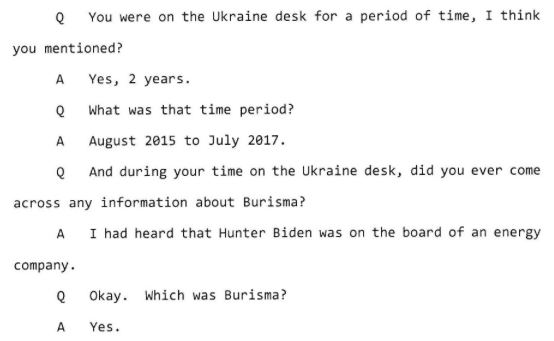 Croft noted that the issue had come up “in passing,” and that “somebody was sort of annoyed” about it. She also testified that Vice President Biden was “very engaged in Ukraine policy” at the time his son had been appointed. 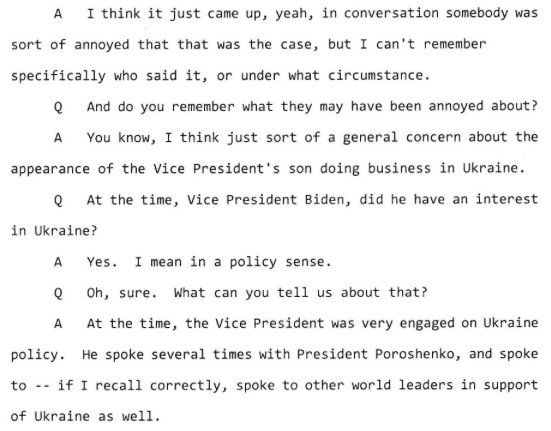 Another witness with potentially exculpatory information is Croft’s predecessor, Christopher Anderson. He testified that he was concerned about the involvement of President Trump’s personal attorney, former New York City Mayor Rudy Giuliani, because he believed that if Giuliani told the president that there were people in the new Ukrainian government who opposed him, that could cause the U.S. to weaken its support for Ukraine, which could embolden Russia.

However, Anderson also confirmed that there were concerns within the Obama administration about Hunter Biden serving on the board of Burisma: 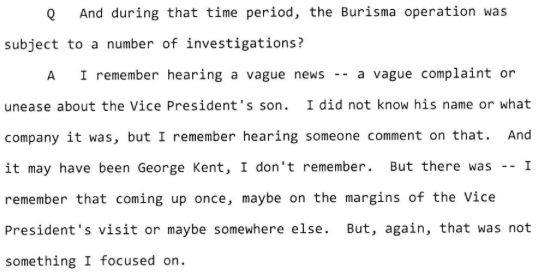 Another witness, Under Secretary of State for Diplomatic Affairs David Hale, is scheduled to testify this week even though his transcript has not been released.