Do you want to be the highly-paid CEO of a hospital/“health” system?

Do you need to pay for a new $356 million medical campus?

Master this how-to guide and you’ll be on your way.

STEP 1: Have the local university use eminent domain to seize acreage for a huge campus and then sell that acreage to you.

STEP 2: Obtain donations for your charitable foundation, secure state grants, and float a loan on the taxpayers for your fabulous new facility.

STEP 3: Declare your company a “non-profit,” and eliminate your tax burden by shifting it onto the backs of taxpayers, thereby increasing the percentage of household income devoted to the cost of all things related to healthcare.

STEP 4: Turn as much of your workforce as possible into subcontractors by outsourcing day-to-day departmental functions to outside entities, such as lab work to Quest Diagnostics; and the emergency department to TeamHealth; and home care to Bayada; and inpatient services to neighboring health systems.

STEP 5: In response to a simple visit to the emergency room and an overnight stay for observation, send a statement that shows charges in the amount of the “Chargemaster” retail price ($23,000) to the relevant (a) government agency, (b) insurance company, and (c) patient.1

STEP 5a: If the bill is not paid by (a) government, or (b) insurance, send the bill to (c), the patient, for the full amount.

STEP 5b: If (c), the patient, cannot pay, alert “collections” of the need to recover the full amount.

STEP 5c: If (c), the patient, cannot pay and appeals the bill,

(i) designate the service as “charity care,”

(iii) write off the difference as a loss so that the hospital/”health” system can get a huge tax break.

STEP 7: Build and rent urgent-care and primary-care centers in every small town to push out the private physician offices who previously had privileges in your hospital/”health” system, and who functioned, effectively, as your staff. You won’t need those relationships anymore. Under the wildly misnamed Patient Protection and Affordable Care Act of 2010 (aka “Obamacare”), you’ve become an “ACO” (an Accountable Care Organization), an entity that has especially privileged status. You can now hire any physicians you may need as employees, while replacing a significant percentage of them with nurse practitioners, doctors of nursing practice, and physician’s assistants, who are cheaper.

STEP 8: Build an executive/administrative class from people with degrees in studying healthcare as a business and administrative specialty. After all, Medicare prohibits physicians from owning and operating hospitals. And who, among the public, understands that most of the money spent on “healthcare” in the United States doesn’t go to the people who deal directly and personally with the sick, but to an administrative class that outnumbers physicians by ten to one? I mean, it’s the consistent finding, isn’t it, of opinion poll after opinion poll that the public trusts administrators, health insurance companies, lawyers, and the politicians who create the public policy that favors them much more than they trust physicians? (NOTE: It’s possible that you can find such polls in an alternate universe. We’ll wait as you search for them.)

STEP 9: Pay your executives handsomely, like the CEO who receives $839,000 per year.

STEP 10: Finally, make provision for the unanticipated consequences that may arise from a new hospital that destroys rural towns in its vicinity.

Whether you’re a public or private hospital system, the foregoing has become standard operating procedure.

But for patients and for taxpayers in New Jersey, and everywhere else in the United States, it is the practice of legalized price gouging, and of making a killing under a system that has been thoroughly warped and corrupted by government public policy and by the rampant corporatizing of medical care in this country. 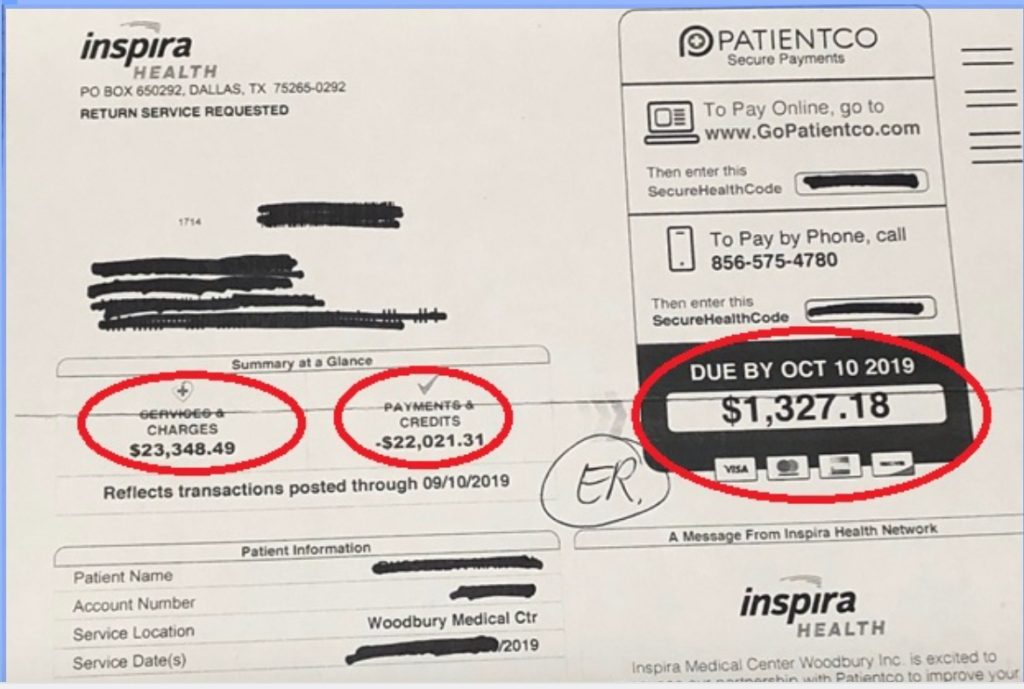