The following article is sponsored by Manifold Productions and authored by its President, Gina Cappo Pack.

As my filmmaker husband interviewed Justice Thomas and his wife, Ginni, for our latest documentary, “Created Equal: Clarence Thomas in His Own Words,” Justice Thomas, both then and now, stands as a shining example of what it means to live an exceptional life.

With unprecedented access, we filmed for more than 30 hours over 6 months, to let this story unfold. Our documentary allows the Justice to tell his own story in his own words, a story of personal resilience and unwavering belief in the Constitution. 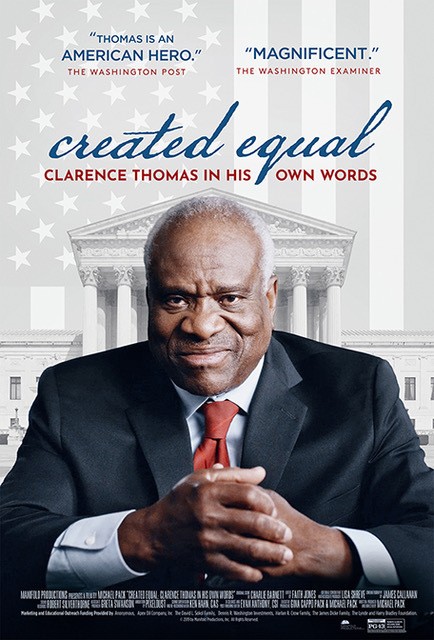 Any new Justice will need the grace and perseverance that allowed Justice Thomas to overcome many other obstacles throughout his storied life. In “Created Equal,” Justice Thomas frankly discusses the challenges he faced head-on, from the poverty of his early childhood to his contentious confirmation hearing.

Justice Thomas’s father abandoned the family when he was only two years old.  His struggling mother sent him and his brother to live with their step-grandmother and grandfather, a tough but fair caretaker who taught Justice Thomas to work hard and respect everyone.

He attended a Catholic seminary, as one of the few black students, where he encountered racism. In the film, Justice Thomas painfully recalls the time a classmate rejoiced when Dr. Martin Luther King Jr. was assassinated.

The Justice describes the implication these hateful attitudes had on his academic performance and how he was allowed no margin of error. “So, I can’t get a 98 … I have to have 100. In other words, to leave them nothing but race—it’s sort of like checkmate,” he said.

This constant pressure — and the changing times — caused Justice Thomas to become, in his own words, “an angry black man.” He rebelled against his grandfather’s values and was kicked out of the house. He went to College of the Holy Cross, where he helped start the school’s Black Student Union.

After attending a violent protest, he found himself in an angry mob. That was a turning point for Thomas. On his way back to school, he stopped in front of a chapel and asked God to take the anger out of his heart. He embraced grace and kindness while not compromising on what he believed was right.

In 1991, President George H.W. Bush nominated Thomas to the Supreme Court, and Democrats did everything they could to stop his confirmation. They began by pushing crazy (and false) allegations, such as that Thomas had kept a confederate flag on his desk to twisting Thomas’ statements in articles he had written, such as when then Sen. Joe Biden attempted to ask gotcha questions about Natural Law.

After these attacks failed, Anita Hill accused Thomas of sexual harassment, and Democrats used these false and salacious allegations to try to defeat Justice Thomas. He described the process as “a high-tech lynching for uppity blacks who in any way deign to think for themselves, to do for themselves, to have different ideas.”

You can still sense the emotion in the Justice’s voice when he talks about the hearing, but he withstood the withering personal attacks and was confirmed by the Senate.  Since joining the Court, Justice Thomas has written nearly 700 opinions and is regarded as the Supreme Court’s leading proponent of originalism, an approach that is grounded in applying the original meaning of the Constitution.

“Created Equal” lets Justice Thomas tell his story while highlighting the character traits a Supreme Court justice needs. America deserves jurists who respect the Constitution and don’t change the law to suit their desires or the times, while pursuing justice and truth with grace.

Gina Cappo Pack is executive producer of “Created Equal: Clarence Thomas in His Own Words,” available for purchase on iTunes, and serves as the president of Manifold Productions.