The University of Virginia’s Center for Politics released its Sabato’s Crystal Ball report Thursday, hypothetically showing Republicans in good shape to regain the House majority in the midterms with a huge uphill battle for Democrats to retain seats.

The comprehensive, nonpartisan political analysis list the Center for Politics published outlines the Democrats’ very slim majority having a hard time retaining control of the House. The 2020 election left the Democrats with a 222-213 majority after the Republicans gained major seats. Now, Republicans only need to net five seats to win the House back.

The report says “that kind of small gain could come from reapportionment and redistricting alone.” The hypothetical ratings is created for the House currently does not show redistricting at this time. The Center for Politics does point out, “While Republicans stand to gain from this process, they would be favored to win the House even if the district lines were not changing.”

The National Republican Congressional Committee (NRCC) has been hitting the vulnerable members with their own “Exit List.” However, some of the members on their list are on the Center for Politics’ list as toss-ups. Mike Berg, an NRCC spokesman, said, “Republicans will take back the House and fire Nancy Pelosi in 2022.”

The report also showed the House races based on the current lines that show a lot more Democrat seats listed in the toss-up column than Republicans. The report points out, “These hypothetical ratings are guided by developments in the 2022 campaign so far as well as the normal tendency for the president’s party to lose ground in the House in midterms.” The report noted, “The Census Bureau won’t be releasing the granular data states need to draw new maps until later this year.”

When looking at all of the seats, the report added that the Crystal Ball does look at the usual advantages and disadvantages the White House typically plays on the House races in the midterms. According to the report, even looking back since World War II, the president’s party has, on average seat lost 27 seats in the midterm, adding “in those 19 midterm elections, the presidential party has lost seats 17 times. The exceptions were 1998 and 2002, when the president’s party made small gains.”

The Center for Politics’ chart (shown below) shows only two Republicans in the toss-up, while the Democrats having 19 of their members. In addition, there are 17 Democrats who are in the lean Democrat column the members will need to fight for, showing Democrats are the “underdogs.” 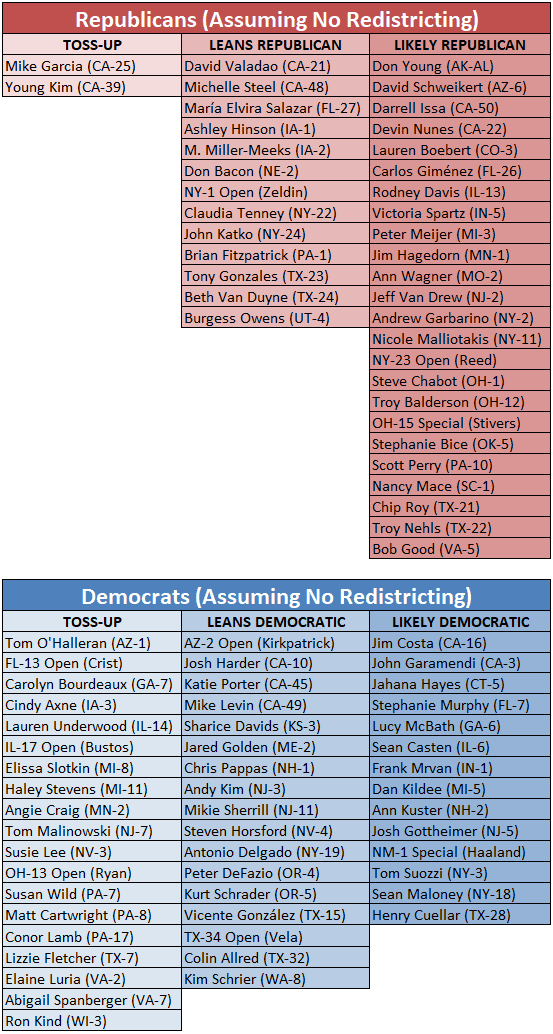 University of Virginia’s Center for Politics, Sabato’s Crystal Ball Report, The House: Democrats Would Have a Tough Slog Even Without Redistricting

The report includes some of the House seats that will give the Democrats a hard time and seats that might disappear or rearrange from redistricting.

For instance, Reps. Charlie Crist (D, FL-13) and Tim Ryan (D, OH-13) have both announced statewide bids, and both of their seats are Toss-ups as open seats. It may be that the prospect of their districts being made more competitive (Crist) or being eliminated altogether (Ryan) is part of why these two members decided to run statewide.

Redistricting may also be playing a role in what recent reporting has described as likely Senate bids by Reps. Val Demings (D, FL-10) and Stephanie Murphy (D, FL-7) in Florida and Rep. Conor Lamb (D, PA-17) in Pennsylvania. We took these likely bids for higher office into account when formulating these ratings (as open seats, FL-10 is Safe Democratic as currently drawn, while PA-17 is listed as a Toss-up and FL-7 as Likely Democratic).

“In an alternate reality with no redistricting, they would have nothing to fear from redistricting, so perhaps they would both be running for reelection instead of opting for statewide runs,” the report added when talking about Crist and Ryan running. The report also said if they were to run again, “in which case we would not have their districts as Toss-ups” but in the columns for lean likely Democrat.