The Lebanon, Ohio City Council voted Tuesday night to become a Sanctuary City for the Unborn, the 29th city in the nation and the first in Ohio to outlaw abortion.

The council unanimously approved an ordinance to make abortion illegal within the city’s limits following the resignation of council member Krista Wyatt who objected to it, FOX 19 reported.

“We hope to be the first in Ohio and then believe other cities could take our lead as well,” said council member Adam Mathews prior to the vote, reported local ABC affiliate WCPO. 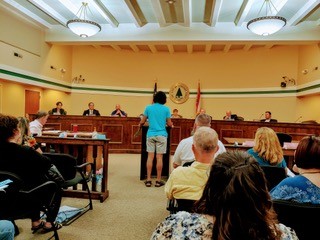 According to the report, the Lebanon City Council heard from more than 100 local citizens before voting on the ordinance.

“We’re very clear: It does not step on any First Amendment rights,” Mathews said. “There’s no penalty, nothing at all, for the mother or anyone who’s going to go through this crisis.”

Mark Lee Dickson, director of Right to Life of East Texas and founder of the Sanctuary Cities for the Unborn initiative, explained to Breitbart News the significance of passing “ordinances” that outlaw abortion, and not simply “resolutions.”

“There are some cities across the United States that have passed resolutions declaring themselves a “sanctuary city for the unborn,” but those resolutions are just statements which do not outlaw anything,” he said, and added:

The City Council of Lebanon recognized, along with 26 cities in Texas and two cities in Nebraska, that it is not good enough to say we value the lives of our unborn neighbors if there are no actions to back those words up. The City Council of Lebanon refused to play the game many politicians are known for playing and did what was necessary to protect the health and welfare of the residents of Lebanon, Ohio by passing an enforceable ordinance which gets the job done. They did not just say they were pro-life, they voted like it, and outlawed abortion in Lebanon, Ohio.

According to a fact statement provided by Dickson to Breitbart News, the Lebanon ordinance “immediately outlaws abortion within the city limits.” [sic]

The Lebanon ordinance defines abortion as “the act of using or prescribing an instrument, a drug, a medicine, or any other substance, device, or means with the intent to cause the death of an unborn child of a woman known to be pregnant.”

“The Ordinance is clear that the term does not include birth-control devices or oral contraceptives,” the fact statement read. “The Ordinance is also clear that the act is not an abortion if the act is done with the intent to ‘save the life or preserve the health of an unborn child’ or ‘remove a dead, unborn child whose death was caused by accidental miscarriage’ or ‘remove an ectopic pregnancy.’”

Possession or distribution of abortion-inducing drugs, such as “mifepristone, misoprostol, and any drug or medication that is used to terminate the life of an unborn child” is illegal.

Violators of the Lebanon ordinance would be charged according to this provision:

Those who are found in violation of the ordinance are guilty of a misdemeanor in the first degree and, under Ohio law, are not to serve more than six months in jail or pay more than $1,000 in fines. This prosecution or penalty is immediately enforceable and contains only one exception: “Under no circumstance may the penalty be imposed on the mother of the unborn child that has been aborted, or the pregnant woman who seeks to abort her unborn child, be subject to prosecution or penalty under this section.”

“This action is not dependent upon the overturning of Roe v. Wade or any other court ruling, but is immediately enforceable,” the fact statement read.

On May 1, the city of Lubbock, Texas, became the largest city in the United States to declare itself a “Sanctuary City for the Unborn” and outlaw abortions within its limits.

Like Lebanon, most of the cities that have passed an ordinance to make abortion illegal within their boundaries do not currently have abortion providers, but have sought to keep abortion out of their cities and towns.

Planned Parenthood stated, however, it began performing abortions at its Lubbock facility on April 15. The abortion vendor and the ACLU filed a federal lawsuit to block the Lubbock ordinance, claiming it is unconstitutional.

“If the provided ordinance is adopted by the City Council of the City of Lebanon and the city faces a lawsuit as a result of the adoption of this ordinance, Attorney Jonathan F. Mitchell, the former Texas Solicitor General, has agreed to represent the city at no cost to the city and taxpayers,” Dickson’s fact statement indicated.

The statement further noted that, ironically, despite the offer for free representation by Mitchell, the mayor and Lubbock City Council have rejected Mitchell’s offer and have hired attorneys in Austin and Lubbock at the expense of the City of Lubbock.

Upon her resignation from the Lebanon City Council, Wyatt said in a statement she is unhappy with the direction the City Council has taken over “the last 16 months.”

“I no longer want to be affiliated with the current Council membership,” she said, citing other legislation with which she disagreed.

There is a core group of people who have hijacked the council to force their personal, political and religious views on the entire citizenship of Lebanon. It is not fair to the citizens and is not the role of a City Council member to be a moral compass. The Charter clearly states that we are to be elected as a non-partisan status, but the Council membership has strayed very far from that.”

Regarding the vote to outlaw abortion in Lebanon, Wyatt continued, “I just don’t like to limit people’s options to medical care, and I don’t think we have the business of making legislation that takes rights away from a woman to make a decision.”

The American Civil Liberties Union (ACLU) of Ohio referred to the ordinance as “dangerous” in a statement. The group said it will join with abortion industry giant Planned Parenthood in a legal challenge claiming the ordinance is unconstitutional.

“This hyper-local strategy is another attempt by anti-abortion extremists to stigmatize and ban abortion in Ohio, by whatever means necessary,” said Freda Levenson, legal director for the ACLU of Ohio. “Anti-abortion politicians in Lebanon have no business interfering in people’s lives and health care. We will do everything in our collective power to ensure this effort is dead on arrival.”

Unanimously the Lebanon City Council just voted in support of this unconstitutional ordinance. ❌

This hyper-local strategy is another attempt by anti-choice politicians to stigmatize and ban abortion in Ohio, by whatever means necessary.

Kersha E. Deibel, CEO of Planned Parenthood Southwest Ohio Region, said the ordinance “directly undermines the value of the individual lives of everyone in Ohio who has had an abortion or may need an abortion in the future.”

“Our strong and diverse coalition will continue to fight to secure access to abortion care in Ohio, especially for young people, people of color, people in poverty, LGBTQ people, people with disabilities, and people of varying immigration status who will always be the most impacted by this kind of oppressive legislation,” she added.

However, as Cincinnati Enquirer reported, Lebanon Mayor Amy Brewer said, “We are clearly saying in our community we do not think it is in our best interest to open a clinic or a hospital that does abortions.”

“We are elected to make decisions based on what’s good for our community today,” she added.