A federal judge threw out most of a lawsuit Monday against former President Donald Trump and former Attorney General William Barr that was filed by Black Lives Matter leaders over the clearing of Lafayette Square last June.

A U.S. judge on Monday dismissed most claims filed by the American Civil Liberties Union of D.C., Black Lives Matter and others in lawsuits that accused the Trump administration of authorizing an unprovoked attack on demonstrators in Lafayette Square last year.

The plaintiffs asserted the government used unnecessary force to enable a photo op of President Donald Trump holding a Bible outside of the historical St. John’s Church. But U.S. District Judge Dabney L. Friedrich of Washington called allegations that federal officials conspired to make way for the photo too speculative.

Friedrich also ruled that federal defendants such as then-Attorney General William P. Barr and then-acting Park Police chief Gregory T. Monahan are immune from civil suits and could not be sued for damages, and that Black Lives Matter as a group could not show it was directly injured by actions against individual demonstrators.

The judge did allow litigation to go forward challenging federal restrictions on protests and other First Amendment activity at Lafayette Square across from the White House, and against local D.C. and Arlington County police agencies that supported the operation.

The park, which is across from the White House, was the scene of violent Black Lives Matter protests last May 29-31, in which rioters assaulted officers and journalists. On May 31, the nearby St. John’s Episcopal Church was partially burnt.

On June 1, the U.S. Park Police and the Secret Service cleared the park to establish a wider, fenced perimeter to protect the White House. They used pepper balls and riot shields, but not tear gas. In a separate operation, the Washington, DC, Metropolitan Police Department used tear gas nearby as they attempted to disperse protesters expelled from the park.

After the park had been cleared, President Trump walked across it to the church and held up a Bible to remind Americans of the importance of the rule of law, and to show that the democratically-elected administration was still in control.

Then-candidate Joe Biden, as well as mainstream media outlets like the Post, falsely claimed that Trump used the military to “tear gas” the “peaceful protesters” so that he could have a “photo-op” with the Bible. Biden added, again falsely, that Trump had held the Bible upside down, though news wire photos clearly proved the opposite. 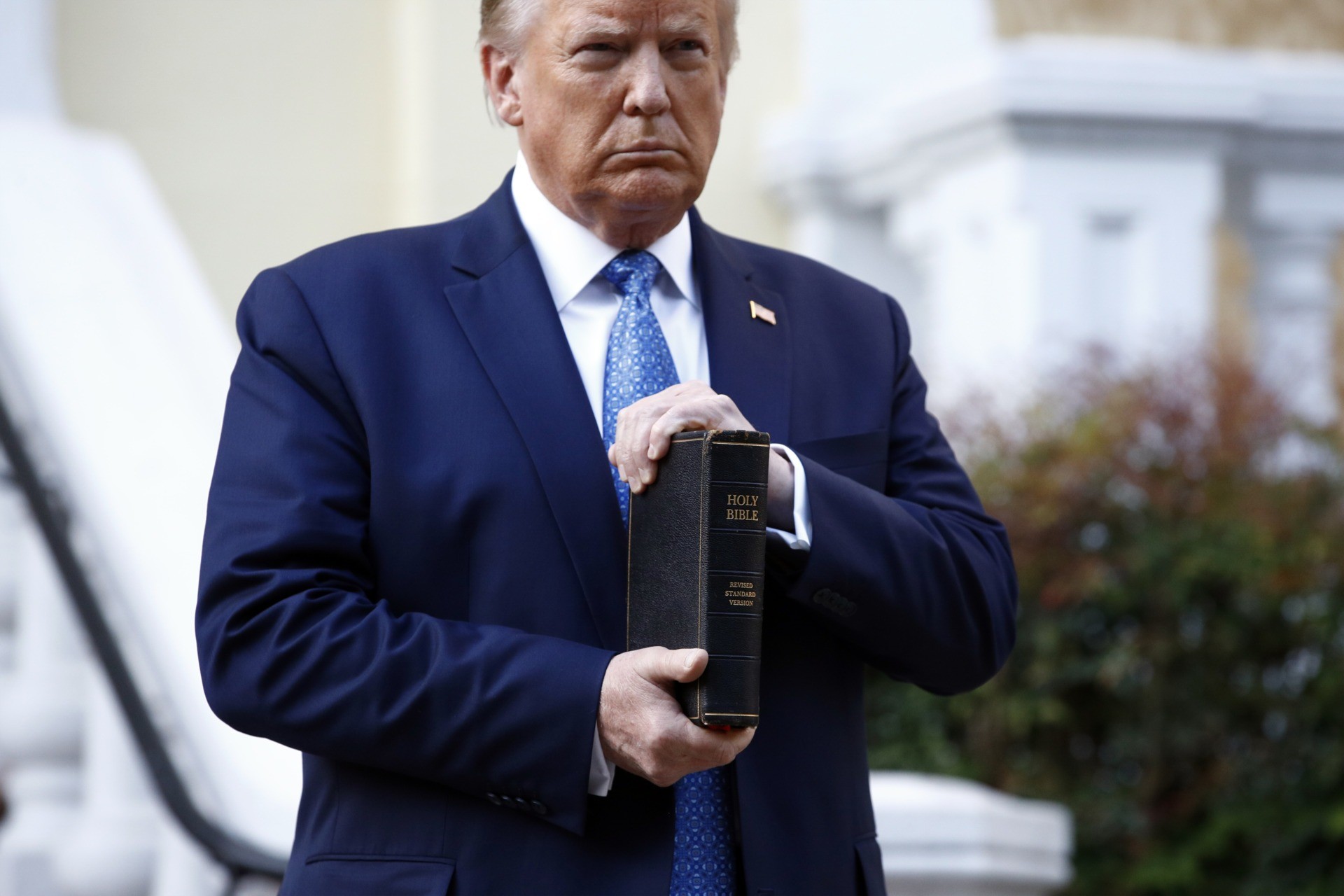 In this June 1, 2020, file photo President Donald Trump holds a Bible as he visits outside St. John’s Church across Lafayette Park from the White House in Washington. (AP Photo/Patrick Semansky, File)

The judge’s 51-page opinion does not mention that report; rather, it considers the factual allegations made by the plaintiffs as if they were true, for the purpose of determining whether they have legal recourse to sue, given motions to dismiss by the defendants.

The judge found that there was a “national security” interest at stake — “specifically, the country’s national-security interest in the safety and security of the President and the area surrounding the White House” — meant that there could be no suit for damages without express congressional intervention.

The judge noted: “Congress has repeatedly considered the trade-offs between White House and presidential security and protesters’ freedoms.”