Tracy Stone-Manning, President Joe Biden’s nominee to lead the Bureau of Land Management (BLM), edited a 1991 issue of the Earth First! journal that included an article mocking federal authorities for their inability to solve the infamous tree spiking crime that Stone-Manning herself was involved in.

The Earth First! issue, published June 21, 1991, contained an article titled “Clearwater Inactive,” which concluded that federal authorities had “no case” for the “alleged” spiking of trees in Idaho’s Clearwater National Forest.

“Well, those spending your tax dollars were busy bungling facts. … Two years later, Bikini still loathes doing the dishes, and the feds still have no case. Life goes on in Missoula,” the article stated.

Stone-Manning was listed as one of the six individuals on the issue’s editorial collective. The issue also gave “special thanks to” Timothy Bechtold. Bechtold, Stone-Manning, and five other individuals were subpoenaed in 1989 over the tree spiking crime.

Read the article below:

Stone-Manning was a graduate student at the University of Montana in Missoula in 1989 when she mailed a letter to the U.S. Forest Service on behalf of John P. Blount, an individual in her “circle of friends,” crudely alerting federal authorities that trees in Idaho’s Clearwater National Forest that were scheduled to be cut down had been sabotaged with metal spikes to prevent them from being harvested. Tree spiking, as this form of sabotage is called, is both a crime and, according to the FBI’s definition, an act of ecoterrorism.

After the Forest Service received the letter, the seven individuals who were subpoenaed — including Stone-Manning — were investigated in 1989 by a grand jury and required to submit fingerprints, as well as handwriting and hair samples. However, the 1989 grand jury did not uncover enough evidence to charge Blount or anyone else with the crime. The case was not solved until Blount’s ex-wife reported Blount to authorities three years later, and in doing so, also named Stone-Manning as the person who mailed the letter for him.

In exchange for immunity, Stone-Manning testified in a 1993 trial against Blount, who was convicted for the tree spiking crime and sentenced to 17 months in prison.

The letter, which only surfaced in the last two months, was laced with profanity and had been retyped on a rented typewriter by Stone-Manning prior to her sending it in April 1989. 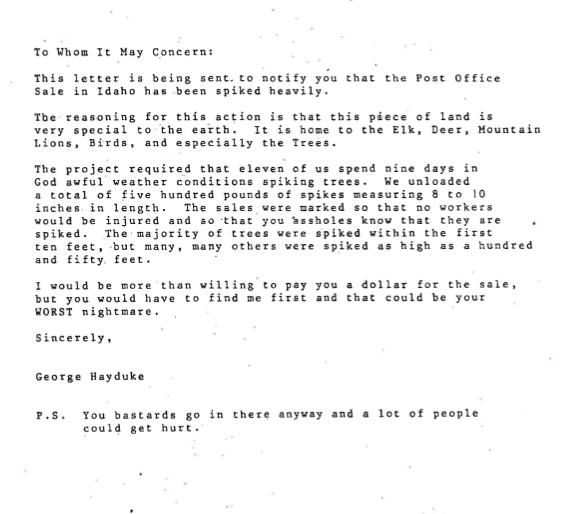 Stone-Manning admitted in 1993 in an interview with the Missoulian — four years after the crime occurred and two years after her 1991 Earth First! journal mocked that the “feds still have no case” — that she waited to come forward until she knew she was “safe.”

“Once [Blount] was in jail, I was safe,” she told the paper. “It was time to come forward. It was my responsibility.”

She conceded that she could have been charged with conspiracy had it not been for her immunity deal. “What I really feel, though, is that I reported a crime, although anonymously,” she said.

In 2013, during testimony for a state government job in Montana, the Missoulian reported Stone-Manning was asked why she was a spokeswoman for Earth First!, members of which committed acts of ecoterrorism. Stone-Manning responded, “The more interesting question is why I decided to leave. That’s because they were angry. Anger doesn’t do much. It doesn’t solve problems. What I do is solve problems.”

Merkley also said that in the tree spiking crime, Stone-Manning “was not an innocent bystander.” He said Stone-Manning did not cooperate with the 1989 grand jury investigation or testify truthfully to the grand jury of her knowledge and role in the tree spiking. Merkley described her as “extremely difficult to work with; in fact, she was the nastiest of the suspects. She was vulgar, antagonistic, and extremely anti-government.”

Incidentally, that same 1991 issue of the Earth First! journal that Stone-Manning edited states as its editorial position, “We do not accept the authority of the hierarchical state.”

Its “Clearwater Inactive” article, specifically, corroborates Merkley’s assertion that Stone-Manning knowingly refused to come forward with her knowledge about Blount and the tree spiking crime in 1989 despite being subpoenaed for it.

Furthermore, Blount, the man convicted of the tree spiking crime, has stated that Stone-Manning “knew about [the tree spiking plot] far in advance, a couple of months before we headed out” and that she had actively agreed to mail the letter for him before he spiked the trees.

The Earth First! issue also contains numerous extremist writings. For instance, one article states, “The way to put an end to institutional war is to eliminate institutions.”

Another article about “the population problem” jokes about shooting people in corporate America. “Actually I liked giving them guns but it seemed like we could then truck them to corporate America for target practice,” it reads: 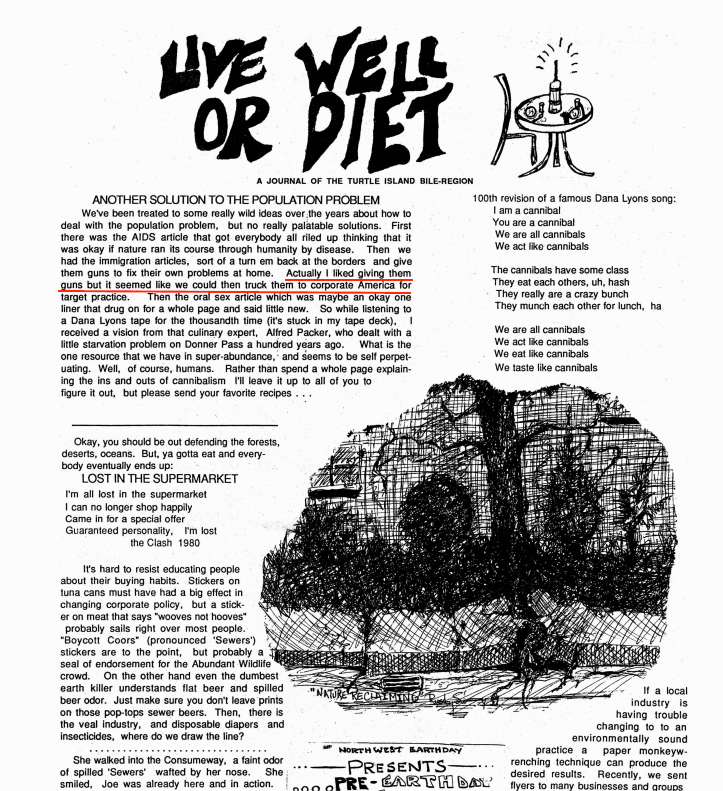 The issue contains a “how to” for harassing Forest Service agents: 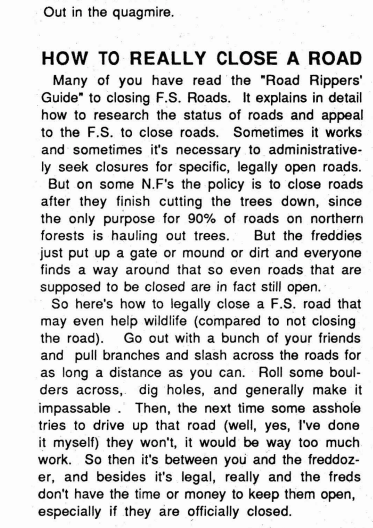 In an op-ed for Breitbart News, William Perry Pendley, the head of the BLM under former President Donald Trump, described Stone-Manning as an “unrepentant … domestic terrorist.”

Stone-Manning’s BLM nomination came to a halt on Thursday after the Energy and Natural Resources Committee voted 10–10 along party lines to advance her nomination for a full Senate vote.

One Republican, Sen. Jim Risch (R-ID), illustrated the dangers of tree spiking prior to the vote and heatedly condemned her nomination. He said, “If the Biden administration wants to have the face and the character of their administration represented by this individual, this attempted murderer, this perjurer, this liar, this conspirator … here’s your person. Confirm her.”

Committee ranking member Sen. John Barrasso (R-WY) had sent Stone-Manning follow-up questions directly related to the 1991 issue of Earth First! that she edited (see page 34) after her June hearing with his committee and after reports began to surface with new details about her involvement in the tree spiking crime. A spokesman for the committee confirmed to Breitbart News on Monday that Stone-Manning never responded to those questions from Barrasso.

Because of the committee’s deadlocked vote, it is unable to recommend Stone-Manning to the Senate. However, Senate Majority Leader Chuck Schumer (D-NY), through a procedural motion, can hold a vote to discharge the nomination out of the committee so that the full Senate can consider it.

Barrasso has said all 49 of his Republican colleagues are united in opposing Stone-Manning. Because the upper chamber is split 50–50, all 50 Democrats would therefore need to vote to confirm Stone-Manning, and Vice President Kamala Harris would then be responsible for casting the tiebreaking vote.