The school board in Albemarle County, Virginia, has proposed a transgender student policy that radically changes the power dynamic between government and family, as it attempts to restrict key student mental health knowledge from parents.

In 2020, the Virginia General Assembly passed a law mandating each public school district in the state to comply with the Virginia Department of Education’s (VDOE) “Policy on the Treatment of Transgender and Gender Expansive Students in Schools” guidance. In it, school districts are required to, for example, allow transgender or “gender-expansive” students to use the bathroom or locker room of their preferred gender, as well as allow boys to compete in girls’ sports.

But Albemarle County Public Schools (ACPS) has taken an even more extreme approach than the Commonwealth’s mandate.

“In some cases, gender-expansive students may not want their parents to know about their gender-expansive or transitioning status,” the “Privacy and Confidentiality” section of the proposed policy reads. “These situations must be addressed on a case-by-case basis and will require schools to balance the goal of supporting the student with the requirement that parents be kept informed about their children.” (Emphasis added).

What is left unclear, however, is the parameters through which the school might strike the “balance” between keeping a student’s in-school activities secret from parents and informing parents of the mental health developments of their children.

A Virginia school board put a teacher on leave after he cited science and Christianity when opposing a draft policy that requires teachers to agree with childrens’ claim that they are members of the opposite sex. https://t.co/jl0i5LOyJ7

Laszlo Farkas, a concerned father with two daughters in the ACPS system, addressed the governmental “overreach” proposed in the policy, telling Breitbart News that “the exercise of power over parents is the biggest issue at hand. The blatant lack of transparency, proper forums to discuss, and overall ignoring of other opinions is a violation of every right I have. There is an overreach issue with the current system and it is important to stop it now before its too late.”

Farkas’s concerns do not appear to be of any consequence to ACPS Superintendent Matt Haas, however. When pressed by another concerned citizen as to why ACPS decided to write a policy that “incorporates far more than what the model policy … requires,” Haas did not deny the implication, replying “In fact, here’s the relevant language from the [VDOE] guidance, ‘Each school board shall adopt policies that are consistent with but may be more comprehensive than the model policies developed by the Virginia Department of Education.'”

Even though the proposed policy informs administrators and staff that “Some gender-expansive youth who are close to reaching puberty, or after starting puberty, may have medical treatments to reinforce their social transition,” which potentially include “hormone suppressants, cross-gender hormone therapy, and, for a small number of young people, a range of gender-affirming surgeries,” much of the school’s policy appears to be focused on what it describes as “social transition”:

Choosing a new first name is one of the things a school can keep secret from parents. Indeed, the policy states that “Students are not required to obtain parental consent or a court ordered name and/or gender change as a prerequisite to being addressed by the name and pronoun that corresponds to their gender identity.” Furthermore, “School administration will not contact a student’s parents in relation to such a request unless asked to do so by the student.” (Emphasis added).

Moreover, it appears that making bathroom and locker room accommodations for students who wish to use the facility opposite their sex is yet another decision that can be made without parental consent or knowledge, so long as parents are not affirming.

A P.E. teacher in Loudoun County, Virginia, has been put on leave after refusing to use preferred pronouns for trans students. https://t.co/3Qc2KO3aJp

Farkas detailed to Breitbart News some of his concerns. “As a father of two daughters, disabled as well, I have deep concerns for their safety, well being, and mental impact these policies could have on them and our family,” he stated, continuing, “This is outrageous to think that over the course of a summer break students will be informed, prepared, and comfortable with allowing anyone to declare their own gender identity and use these facilities. I as a father am not comfortable with males in female restrooms.”

Should a school be approached with the information that a student is transitioning, the proposed policy lays out next steps, including, “In collaboration with the student and the student’s family (if the family is supportive of the student), develop a plan to ensure that the student has equal access and opportunity to participate in all programs and activities at school and is otherwise protected from gender-based discrimination at school.” The language appears to indicate that the process will happen regardless of the wishes of the family.

Citizens Advocating for Responsible Education (CARE), an Albemarle County-based group of citizens and parents, is concerned the practical implication of this section of policy would mean that “If the school suspects that the parents are not supportive of the daughter’s transition, she could start using the boys’ bathroom and boys’ locker room without her parents’ knowledge.” 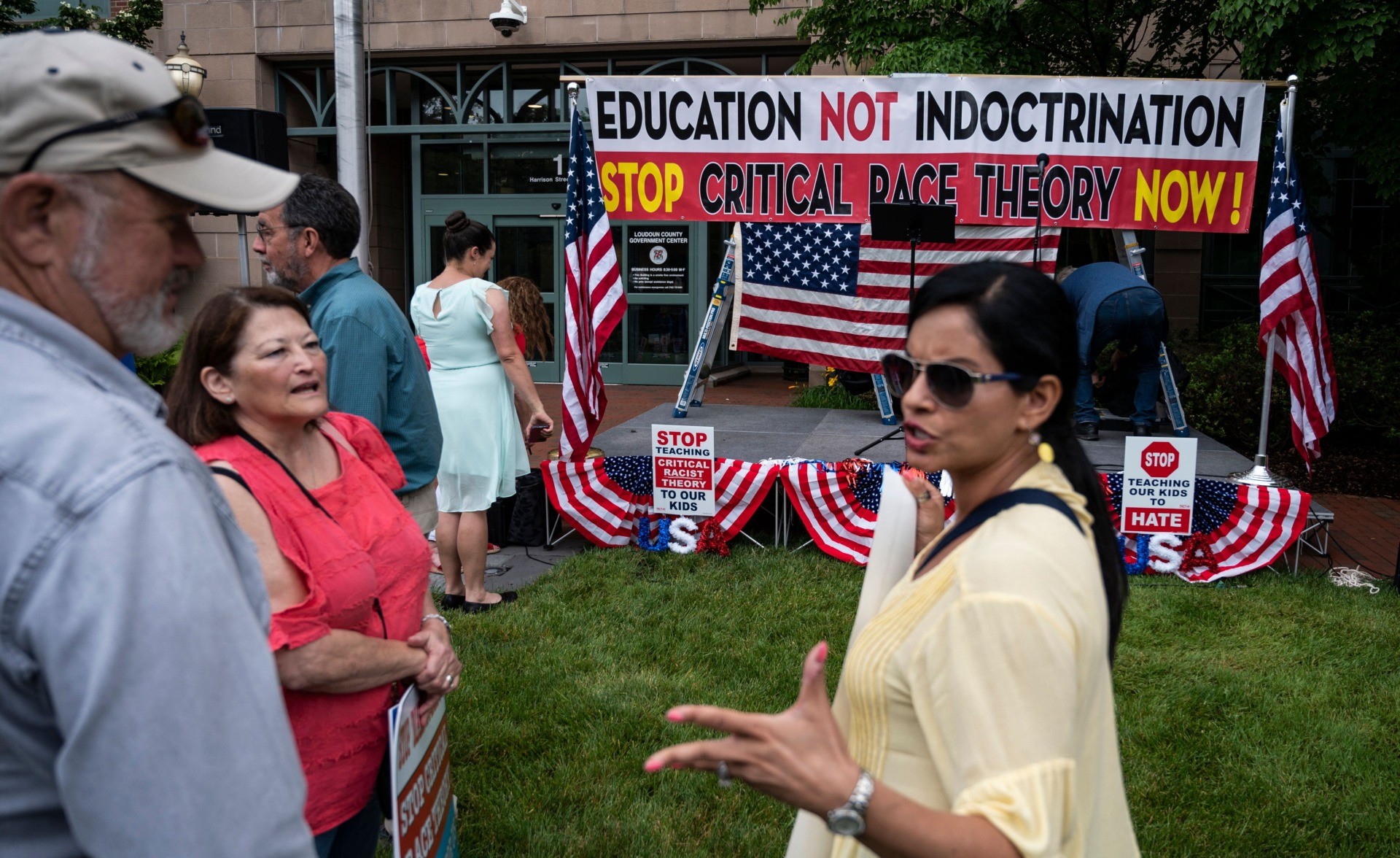 People talk before the start of a rally against “critical race theory” (CRT) being taught in schools at the Loudoun County Government center in Leesburg, Virginia on June 12, 2021. (ANDREW CABALLERO-REYNOLDS/AFP via Getty Images)

The policy also states some instances where a school officials would be obligated to call Child Protective Services (CPS). Rightly so, “If school administrators or teachers suspect or become aware that a student is being harmed, abused, or at risk of harm or abuse at home, they should report these concerns to Child Protective Services immediately.”

Shortly thereafter, the policy states that if “based on safety concerns or fear about lack of acceptance” a student does not want the school to contact their parents, they will not do so.

School officials must keep in mind that gender-expansive youth often experience significant family challenges. Some gender-expansive students have not talked to their parents about their gender identity and/or do not want their parents to know about their gender-expansive status based on safety concerns or fear about a lack of acceptance. Therefore, prior to contacting a student’s parents or guardian, the principal or designee should speak with the student to ascertain the level of support the student either receives or anticipates receiving from home. If the student does not want the school to contact the student’s parents, the school shall honor that request for privacy with the proviso that an underage student shall be advised that the school may not be able to implement certain aspects of the student’s transitioning plan without parental approval.

Breitbart News reached out to Phil Giaramita, ACPS’s Strategic Communications Officer and Freedom of Information Act (FOIA) Officer, to ascertain whether a family displaying a “lack of acceptance” to their child’s apparent transition would be grounds for reporting the family to CPS. Giaramita told Breitbart News that the draft policy “does not make any changes to the current responsibilities that an educator has a mandated reporter if they believe a child is being harmed at home”:

The draft policy does not make any changes to the current responsibilities that an educator has a mandated reporter if they believe a child is being harmed at home. They would notify the department of social services and the department would determine if steps need to be taken to protect a child. So no change to current practice.

There has to be a basis for an educator to believe the child they are seeing in school is being abused. That could be signs of physical harm or a child’s own words. Such evidence would trigger an investigation to determine the source of the harm.

If a child were to say that their parent is not being supportive of their sexual identity and that is causing them emotional distress, our likely response would be for our school counselor to attempt to bring the child and parent together to talk about the conflict and offer services that could help with a resolution.

Despite this, parents are still extremely concerned about the implications of this policy. CARE notes that “A child could be having private conversations with a principal/teacher/guidance counselor about his/her gender dysphoria. The school could deem the family ‘unsupportive’ and never tell them of the child’s struggles.”

More importantly, CARE cites the high rates of transgender youth considering suicide (52 percent according to the Trevor Project’s 2020 National Survey), lamenting that “Despite a transgender child’s increased risk of suicidal thought, ACPS could be aware that a child has gender dysphoria but at the child’s request the school would keep that crucial information from parents.” (Emphasis added).

The ACPS school board is set to hold an information session, which will not include a public comment period on the policy July 28. The tentative date for voting on adopting the policy is August 12.