Former Virginia Gov. Terry McAuliffe (D), who is running for governor again, disappeared abruptly from a virtual forum for the disabled community to make it to a campaign fundraiser on Thursday in Las Vegas with Nevada Gov. Steve Sisolak (D), who is accused of abusing his ex-wife.

McAuliffe was supposed to participate on a Zoom call, hosted by the Arc of Northern Virginia, about disability issues alongside Virginia’s Republican gubernatorial candidate, Glenn Youngkin, and other statewide candidates.

The Virginia Democrat, however, experienced a scheduling conflict between the forum for the disabled community and his Vegas event.

An invitation obtained by Breitbart News revealed McAuliffe, a longtime Clinton ally and former chair of the Democratic National Committee, had a Thursday evening fundraiser to go to at an undisclosed location in Vegas. The fundraiser cost a minimum of $500 to attend as a guest and up to $5,000 to be a “sponsor.” 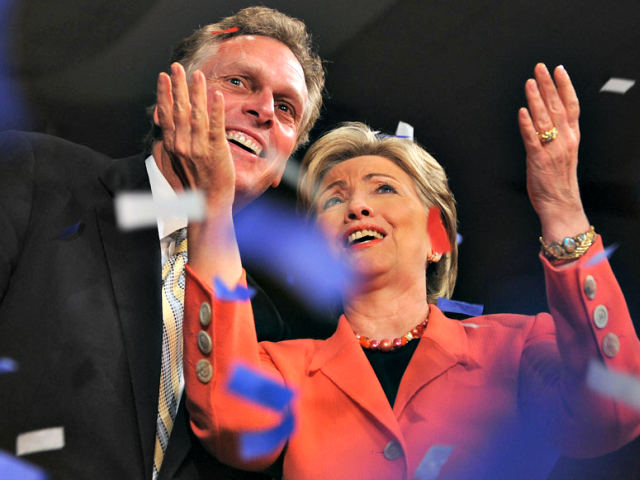 During the Zoom meeting, a clip of which Youngkin shared on social media, the host introduced McAuliffe but then added, “But he will need to leave after the first question to keep a prior commitment”:

He left to attend a fundraiser in Las Vegas with a politician accused of abusing his ex-wife. pic.twitter.com/j2CU9qPEdb

Attendees of the forum complained about McAuliffe ducking out early, including Tonya Milling, who wrote, “Yes, thank you to the candidates that made this event a priority. Unlike former Gov McAuliffe, who made it known before we started that he would only take one question.”

Another attendee, Hattie Higgins-Greene, wrote, “We appreciate ALL of the candidates for being here this evening. IT’s unfortunate that some had scheduling conflicts.”

Attendee Jacob Matthes thanked Virginia Del. Hala Ayala (D), a candidate for lieutenant governor, for being the only Democrat on the call and praised the Republicans, including Youngkin, lieutenant governor candidate Winsome Sears, and attorney general candidate Jason Miyares, for “making this a priority.”

The Republican Party of Virginia (RPV) demanded an apology from McAuliffe on Friday, the day after he abandoned the forum. “Terry McAuliffe must immediately apologize to Virginia’s disabled community for his disgraceful and disrespectful behavior yesterday,” RPV chairman Rich Anderson said in a statement, “when he deserted The Arc of Northern Virginia Candidate Forum and members of the disabled community to fundraise with an accused domestic abuser.”

The RPV also issued testimony from a gentleman, Arthur “Lee” Talley of Virginia, who has a disabled son. Talley said he was “horrified” by McAuliffe’s “bad judgment”:

As an advocate for both my son and Virginia’s disabled community, I was horrified that Terry McAuliffe would leave us high and dry in order to fundraise with someone accused of domestic abuse. That decision was disrespectful, reprehensible, and shows bad judgment not at all fitting of someone who wants to be governor. … Last night clearly showed that a vote for McAuliffe would be dangerous for any family with a loved one with special needs. A vote for him represents a continued status quo of a system not working for our families and a worsening of services for families in Virginia.

Sisolak faces accusations from his ex-wife, including that he treated her “like a prisoner” and allegedly bruised her neck during a domestic altercation in 2000, according to a report from the Daily Caller. Sisolak, has maintained, however, that his ex-wife was the aggressor in that altercation.

Sisolak also had a high-profile and messy breakup with Kathleen Vermillion, a former Henderson City, Nevada, councilwoman, in 2012. She claimed — but then later recanted her claim — that Sisolak, then Clark County commissioner, behaved inappropriately toward her then-15-year-old daughter.