“This is not data that we are speculating about,” he added. “This is federal data, and that’s where we get the 15 million number. Fifteen million ballots were sent in the mail last year that never ever came back and were counted” (emphasis added).

Adams said that “some of them, we don’t know where they are, they’re just gone. That tells you the system broke down. That tells you that probably ballots came back that were counted for the wrong people. The whole thing is a mess. It can’t be repeated again. And that’s the problem with mail balloting. We’re giving the idiots at the post office control over our government.”

The actual number of mail ballots unaccounted for in the 2020 election is higher than 15 million, Adams noted, because not all states responded to the Election Assistance Commission.

“A lot of states didn’t give the data [to the Election Assistance Commission]. … They’re not required to. … This is all voluntary, so a lot of states never reported the number of screwups they made, how many ballots disappeared, how many ballots were rejected that came back in the mail. So the number is per se higher than 15 million,” Adams added.

“Can you explain what those three categories are?” Boyle asked.

“Each one of them has their own level of significance and victims,” Adams answered.

“Let’s do the ‘unknowns’,” he continued: “The ‘unknown’ ballots, we used to call them the ‘disappeared,’ but Media Matters, all the lefties, went crazy and said, ‘They’re not disappeared; they’re probably just in landfills.’ Okay, we’ll take that.”

“The ‘unknowns’ are ballots that went out and just vanished. They went into the ether. Now a lot of them are probably laying on apartment floors, such as in Nevada, where we saw pictures of dozens of ballots just laying on the floor of apartment complexes in the lobby. They eventually got thrown away because the people don’t live there anymore. Others probably didn’t get voted. There’s going to be some that the people got them and just decided not to vote. We’ll grant that,” he said.

“But,” he continued, “a lot of them probably ended up in the sewer, in the garbage, just laying around for people to pick up. That’s the ‘unknown’ category.”

Adams then described the “undeliverable” category of mail ballots:

“The [‘undeliverable’] bouncebacks are more troubling because it means the voter rolls are a mess,” Adams said: “The [undeliverable] bouncebacks are ballots that were mailed out to somebody who’s supposed to be an active voter, and they bounced back to the election office that the voter doesn’t live there anymore, which means the voter rolls are a mess, and it also means you probably are sending them, some get through, they never bounce back, and they go to the wrong people.”

“The last category, Matt, is the ‘rejected,’ and this is a troubling one because when you go to vote in person … and you screw up, they can give you a new ballot right there,” Adams said, continuing, “When you go to vote by mail, you don’t. And that’s what the rejected ballots are. Somebody made a mistake on the ballot, and they got it back, and it got rejected. And that means that voter was disenfranchised. And I can tell you that I can guarantee there was a larger rejection rate among the elderly, which are Trump voters, than there were f0r 0ther ballots. So that’s the ‘rejected’ ballot.”

“Could this have affected the outcome of the presidential election?” Boyle asked.

“There is no question it did affect the presidential race. The only question is how much,” Adams responded: 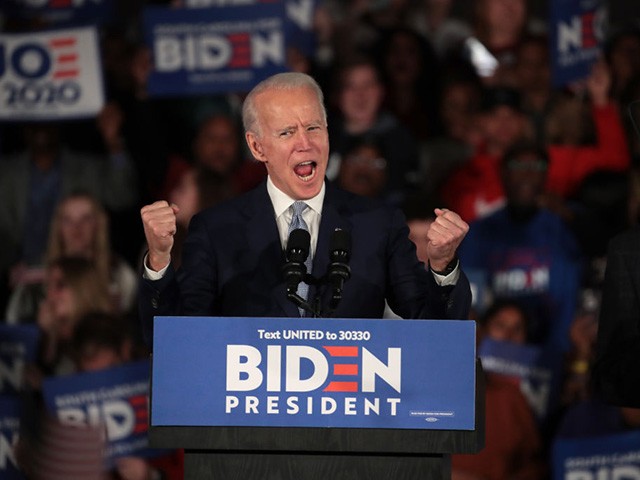 COLUMBIA, SOUTH CAROLINA – FEBRUARY 29: Democratic presidential candidate former Vice President Joe Biden celebrates with his supporters after declaring victory at an election-night rally at the University of South Carolina Volleyball Center on February 29, 2020 in Columbia, South Carolina. The next big contest for the Democratic candidates will be Super Tuesday on March 3, when 14 states and American Samoa go to the polls (Photo by Scott Olson/Getty Images).

“We know that tens of thousands of ballots were rejected. They were rejected by people who made some kind of small mistake,” he added.

“In a place like Wisconsin, there were more of these ballots that screwed up than the margin of error, by like four-fold,” Adams continued.

As Breitbart News reported on August 27:

The report showed that, unlike the results of the 2012 and 2016, the number of “missing or undeliverable” mail ballots in 2020 exceeded the margin of victory in the election to determine which presidential candidate would be awarded the state’s ten electoral college votes.

In 2020, for instance, 1.4 million ballots were mailed to Wisconsin voters, which was 86 percent of the 1.6 million votes cast.

Of those 1.4 million mail ballots, 76,308 were classified as “unknown,” while 6,458 were classified as “undeliverable.” Combining those two classifications, 82,766 mail ballots were either “unknown” or “undeliverable,” a number that is 400 percent greater than Biden’s certified 20,682 margin of victory in the state over former President Donald Trump.

In 2012, 54,077 mail ballots were “undeliverable or unknown,” which was a mere 26 percent of Barack Obama’s 205,204 vote certified margin of victory in the state over Mitt Romney (all emphases added).

“What that tells us is the system is screwed up, that it broke down,” Adams said of the Wisconsin mail ballot report.

“There was random chance, chaos. All of these characteristics got cranked into the election last year because of mail balloting,” he stated. “It was screwed up, I think, deliberately,” Adams said of the 2020 election, adding, “This was a plan that was cooked up by Zuckerberg and Vanita Gupta, who’s now the associate attorney general, who was a radical left-wing organizer, and a whole bunch of union people. Mail balloting was a plan that was cooked up. Soros money flowed into the Vote at Home foundation. There was all sorts of money that was moving to advocate for this corrupted system in February, March, April, May [2020]. And then, there was court litigation to force us into this corrupted system. It’s no accident that 15 million mistakes were made.”

As Breitbart News reported in April:

Private funding of election administration was virtually unknown in the American political system until the 2020 presidential election, when Facebook CEO and founder Mark Zuckerberg and his wife Priscilla Chan donated $350 million to the Center for Technology and Civic Life (CTCL), which provided funding to county and municipal governments around the country for election administration, and $69 million to the Center for Election Innovation and Research (CEIR), which provided funding to 23 state governments, primarily through the Secretary of State’s office, also for the funding of election administration.

“How do you fix this so it doesn’t happen again?” Boyle asked.

Adams said efforts to fix the problem of election integrity are “a mixed bag.”

“After the election, she was just appointed–get this–to the United States Post Office Board of Governors. So now, she’s on the inside of the government to advocate this,” Adams continued.

“The Justice Department has issued official DOJ guidance that is warning states that if they go back to the pre-COVID procedures–meaning not mistake-filled mail–it is not presumed to be okay,” he added.

“The Public Interest Legal Foundation, we sent a letter to all states last week telling them the DOJ guidance is bunk, that it’s wrong, it’s not based on the law, and that these [new state election integrity] laws are presumptively valid,” Adams said.

“There’s going to be a fight over this. Any state that tries to go back to pre-COVID is possibly going to invite a DOJ lawsuit. We’ve [the PILF] already intervened to help defend Georgia … and I’m afraid we’re going to have to do it all over the country if they [DOJ] start rolling back,” Adams concluded.