Current Missouri Attorney General Eric Schmitt (R) is hoping to snag a U.S. Senate seat in 2022 and has publicly shamed China for its communist ways within the past two years — seemingly aligning himself with the GOP’s “America First” priorities.

But when Schmitt was a Missouri State Senator, he took quite the opposite posture and looked to partner with China in the hopes of bringing a thriving enterprise to the state.

In 2011, Schmitt was one of the main proponents of Aerotropolis, more colloquially known as “China Hub,” a global cargo hub at Lambert-St. Louis International Airport which he believed would increase exports and foreign trade.

Schmitt, who even visited China in the hopes of getting the plan off the ground, said Chicago was “maxed out” for China’s needs, and Indianapolis and Cincinnati were cities that hope to edge out St. Louis in making a run for the huge China trade, the Webster-Kirkwood Times reported.

“We need to be a player again,” Schmitt said. “We need to invest in our future and our infrastructure. We have a location and transportation assets that can put us on the map again and improve our economy.”

He partnered with St. Louis Democrats to push the bill forward, one which required the passage of an economic incentives package with major tax breaks, including as much as $360 million in tax credits for developers to build warehouses and establish the international deals.

Ultimately, “China Hub” did not receive the support it needed to come to fruition

“I actually think it was a win for taxpayers that Aerotropolis died,” said Sen. Jim Lembke, R-Lemay at the time. “There was a lot of subsidy money on the line based on a wink and a nod from the Chinese that they would choose St. Louis to fly in cargo.

Before the bill failed, State Sen. Jeanne Kirkton, (D-Webster Groves) said she was leaning toward voting against it. She said:

If this is such a great idea, why isn’t the free market taking care of it? This will be a big boondoggle if China doesn’t come along. It seems strange to me that we are jumping to play nice with the communists and will just look the other way at their history of human rights violations.

At a time when we are cutting MoDot, mental health, education, higher education, seniors and health care in this state – we are going to find tax credit money to help China land cargo? I think we have obligations that we are not meeting in this state, so why would we build warehouses for China?

However, Kirkton said she “admire[d] the amount of work that Sen Schmitt has put into this idea.”

Unlike “China Hub” another bill garnering Schmitt’s support in 2013 did pass and effects Missouri to the present day.

In 2013, Americans largest pork producer, Virginia-based Smithfield Foods, wanted to sell out to a Chinese company.  But “it had a problem: part of its operations were in Missouri, where a state law prohibited foreign ownership of agricultural property,” according to the St. Louis Post-Dispatch. Since 1978, Missouri had a law against foreign agricultural ownership to protect economic autonomy at a time when foreign investment in the U.S. was “creating concerns.”

Senate Bill 9 (SB9), which was sponsored by State. Sen. David Pearce (R) in 2013 and handled in the State House by State Rep. Casey Guernsey (R), proposed modifying agricultural provisions in Missouri. Guernsey, quietly amended the pending bill, “adding wording to allow foreign entities to own up to 1 percent of Missouri’s agricultural land,” which almost equals  300,000 acres, the Post-Dispatch reported.

According to the 2015 report, the bill’s sponsor received more than $30,000 in campaign contributions from Smithfield Foods. Each member of the state Senate committee had also previously received money from the company. Though, Guernsey “denied the legislation had anything to do with helping Smithfield Foods…”

He said in the veto session: [emphasis added]

Whether, or to what degree, Missouri agricultural land should be foreign owned is an important policy choice for the people of Missouri, a decision that should be made through their elected representatives and only after the specific proposal has been sufficiently vetted and openly considered.

In addition, the measure was rejected by at least one legislative committee on agriculture as well as publicly opposed by leading Missouri agricultural groups.

Nevertheless, Guernsey led the charge to override the governor’s veto — a measure Schmitt voted in favor of.

A few weeks after the bill’s passage,  a Chinese food processing conglomerate called WH Group, then known as Shuanghui Group, bought out Smithfield Foods, which owned at least 40,000 acres of farmland in the state.

Subsequently, in 2015, “legislators scrapped the approval requirement, making it easier for foreign companies to purchase land through shell companies, and harder for the state’s government to monitor purchasing,” the Counter reported.

A 2015 Post-Dispatch report found that the Chinese invested more than $860 million in Missouri between 2000 to 2014, with much of the investment located in the 5th and 6th Congressional districts “because of Smithfield Foods.”

“Part of the biggest problem we have with this is nobody knows exactly how many acres have been sold,” State Senator Doug Beck (D) said during a 2021 hearing of the Senate Agriculture, Food Production, and Outdoor Resources Committee.

“If we’ve reached that one percent threshold in this state—there’s no knowledge if we’re there or not,” he continued.

The Counter, citing U.S. Department of Agriculture data in its report, noted that, as of December 2019, “Missouri has already hit up against the 1 percent cap, which could mean that foreign ownership has exceeded the limit in the intervening months.”

State Sen. Beck now wants to reverse the damage of SB9, which Schmitt supported, “arguing that the practice presents both national security and food security concerns.” 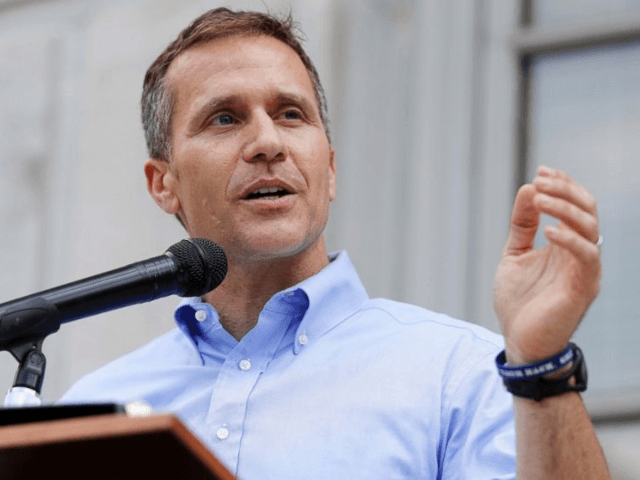 In this May 23, 2017, file photo, Missouri Gov. Eric Greitens speaks to supporters during a rally outside the state Capitol in Jefferson City, Mo. Greitens resigned June 1, 2018, while facing potential House impeachment proceedings over allegations of sexual and political misconduct. A woman with whom Greitens had an extramarital affair testified that he slapped, shoved, restrained and belittled her during a series of sexual encounters in 2015, while he was preparing to run for governor. (AP Photo/Jeff Roberson, File)

who is also running for U.S. Senate against Schmitt in 2022, weighed in on the topic recently during an interview on Breitbart News Saturday.

“[It’s] just one example where you have politicians engaged in these special interest tax credit programs designed, in this case, to benefit the country of China rather than the United States of America,” Greitens said. “These politicians push legislation to allow Missouri farmland to be sold to Chinese communist party owned companies. It is disgusting.”

Schmitt has distanced himself from his past actions — as attorney general in 2020, he filed a lawsuit against the Chinese government, Chinese Communist Party (CCP), and other Chinese officials and institutions, “alleging that their actions to suppress information, arrest whistleblowers, and deny the contagious nature of the 2019 novel Coronavirus led to loss of life and severe economic consequences in Missouri.”

In a statement to Breitbart News on Wednesday, Schmitt’s spokeswoman touted recent backlash Schmitt received from the CCP saying  it was a “true honor for General Schmitt to stand with Senator Tom Cotton and our Senator Josh Hawley in receiving the threat of Chinese sanctions for being so aggressive in holding the Chinese Communist Party (CCP) accountable.”

Breitbart News asked whether he stands by his decisions related to SB9 and “China Hub,” and what kinds of policies he would promote if elected senator to curtail China’s grasp in the U.S. His office did not explicitly answer either of those questions.

“General Schmitt received the threat of sanctions from China because he was the first Attorney General in the country to file suit against both the Chinese government and the CCP to get to the bottom of the origins of COVID-19. To say that General Schmitt has “helped China” is laughable,” his office said.