“If you encounter issues in your classroom related to the mayor’s new quarantine guidelines for students, including cases where students are not able to maintain 3 feet of distance, please use this form to document them,” the union that represents the city’s teachers tweeted Sunday.

If you encounter issues in your classroom related to the mayor's new quarantine guidelines for students, including cases where students are not able to maintain 3 feet of distance, please use this form to document them: https://t.co/3FWGQ1Z5C9

Mayor Bill de Blasio announced on Sept. 20 that students would no longer have to quarantine after a positive COVID case in their classroom as long as they were properly masked and three feet apart. Please use this form to document any issues in your classroom related to these new quarantine guidelines, including situations where students are seated with less than three feet of distance. You may submit photos and/or describe interactions with the DOE’s test and trace investigators.

As Bloomberg reported, UFT President Michael Mulgrew and Mark Cannizzaro, president of the Council of School Supervisors & Administrators, warned de Blasio to delay his Tuesday deadline for mandatory teacher coronavirus vaccinations because of the likely result the mandate will create staffing shortages.

“We are concerned, very, very concerned,” Mulgrew said Friday during a news conference. “They’re putting us in a situation where we will have children, thousands of them, in an unsafe situation.”

Both Mulgrew and Cannizzaro warned the district has no plan for substitute teachers and administrative staff to counter a high absentee rate of teachers and district staff.

The battle between the unions and City Hall is the latest chapter in the reopening of the largest U.S. school system. The fight may be a preview of challenges to come for school districts and other employers as they move to impose vaccine mandates on workers.

However, late Friday, a judge for the U.S. Circuit Court of Appeals for the Second Circuit granted a temporary injunction sought by a group of teachers. A three-judge panel is now scheduled to take up the case Wednesday.

New York City Department of Education spokesperson Danielle Filson said officials were “confident [their] vaccine mandate will continue to be upheld once all the facts have been presented, because that is the level of protection [their] students and staff deserve,” NBC News reported.

“While this means that the current vaccine or weekly testing mandate remains in place for the week of September 27 for all staff, we should continue to prepare for the possibility that the vaccine mandate will go into effect later in the week,” Chancellor Meisha Porter stated.

Prior to the judge’s decision, de Blasio also said during an interview with WNYC radio Friday he believes many unvaccinated teachers and other district employees would take the shot by the original deadline of midnight Monday. 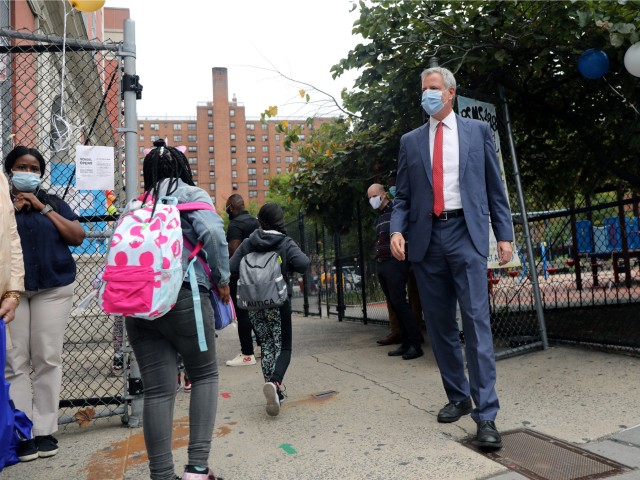 “A lot’s going to happen between now and Monday,” the mayor said. “If we need thousands we’ll have thousands [of substitute teachers and other staff]. As of Tuesday, the only adults who will be in a school building will be people who are vaccinated.”

But New York City Councilman Mark Treyger, who heads the Education Committee, said, “Substitute teachers are already almost impossible to find. There’s a difference between covering a classroom and educating a classroom.”