Twice-failed presidential candidate Hillary Clinton declared on Tuesday that “we are boiling” and in the midst of a “Constitutional crisis” even though Joe Biden is president.

“It’s like the frog dropped into the water. We are boiling. But there’s still time to hop out of the pot,” Clinton wrote on Tuesday, referencing her extensive September 30 interview with the far-left Atlantic:

We are boiling. But there's still time to hop out of the pot. https://t.co/MjCr5DRztR

Clinton’s remark is a reference to her interview with the Atlantic, in which she agreed that the U.S. is facing a “constitutional crisis” and working under the design of what she described as “minority rule.”

“I won the popular vote, lost the Electoral College by 70,000-plus votes, and we saw all this stuff online about the Trump campaign and WikiLeaks and the Russians and all of that,” she lamented.

“And then Joe Biden won by a huge popular-vote margin, but only won the Electoral College by about 100,000 votes,” she continued, contending the “parallels between what happened in 2016 and 2020 are not often understood.”

Clinton blamed Republicans for attempting to “undermine our democracy” and accused them of attempting to “suppress votes” and “change the way elections are determined.”

“They’re going to try to give legislatures the power to basically throw out elections if they don’t go their way, because now they want to be able to win, even if they lose the popular vote and they legitimately lose the Electoral College,” she said, referencing GOP efforts to implement basic election integrity laws. 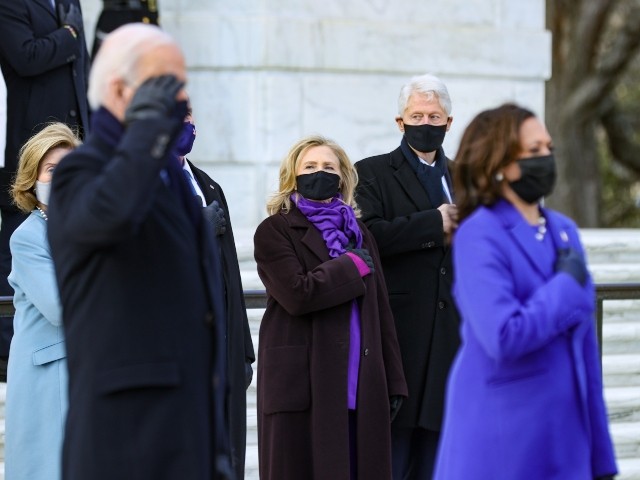 But the new part [is] having your vote counted, because they want to replace independent people like we saw with the Republican secretary of state in Georgia who stood up to tremendous pressure—now they want to throw elections, if they can, either to state legislatures or if necessary to the House of Representatives, where the vote is counted by state.

“We are in the middle of a constitutional crisis,” Clinton declared. “It’s like the frog dropped into the water. It’s boiling.”

“People are still arguing about stuff that is important, but not as fundamental as whether or not our democracy will be broken and then taken over. And minority rule will be what we live under, the norm,” she warned.

During that same interview, Clinton also expressed support for ending the filibuster, saying she would “absolutely” get rid of it.