Leftists are starting to look at Rep. Ruben Gallego (D-AZ) as a candidate to primary Sen. Kyrsten Sinema (D-AZ) in the future as they fume over the senator not being a rubber stamp for President Joe Biden’s agenda.

Democrat activists and members of Congress are livid over the senator’s decision not to support the price tag of the $3.5 trillion radical reconciliation bill the Democrats are using to push far-left ideas and campaign promises.

Sinema has become the target of the far-left. Last weekend, a viral video showed left-wing activists — linked to a border lobbyist group funded mainly by billionaire George Soros — harassing Sinema inside the hallways of Arizona State University (ASU), eventually following her into the bathroom. They yelled at her for her lack of support towards President Joe Biden’s radical “Build Back Better” program.

Even though both sides of the aisle primarily criticized the effort, members such as Sen. Bernie Sanders (I-VT) reportedly did not want to condemn the leftist protesters who harassed his colleague. Axios published an email exchange showing that Sanders’ office purportedly did not want his name on a statement condemning the activists due to Sinema’s opposition to Biden’s agenda.

Now the far-left is laying the groundwork for a challenger such as Gallego. The Hill reported that “Run Ruben Run” is already set up by one campaigner to recruit the representative to run. After speaking to numerous Democrat activists, the Hill said that the consensus is Gallego is the “top prospect if Sinema continues to hold out on the party’s key legislative priorities.”

Another group called Primary Sinema PAC is raising money for “when a strong challenger emerges.” 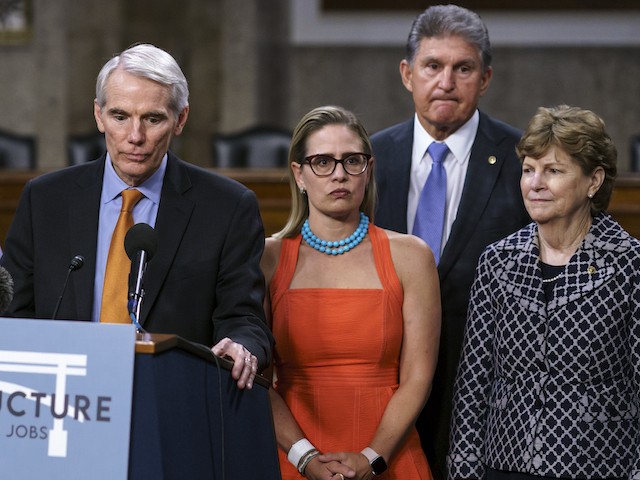 “Ruben is a strong progressive leader who has accomplished a lot of things in a short time,” said the former Maricopa County Democrat Party chair, Steven Slugocki, to the Hill. “He’s passed a lot of bills, he’s a veteran, he’s a Latino. He’s a strong voice in Congress who’s getting things done. He has a lot of support in the party as well as with Democrats across the state.”

He added, “This next week is going to really, really determine what’s going to happen here in the future. If this whole thing falls apart, I may have a very different answer for you in a week.”

The senator, sitting with nearly $3.6 million in the bank, has over five times as much money as Gallego does. But, Democrats who spoke with the news publication claim the representative has “plenty of fundraising potential should he ultimately decide to run for Senate in 2024.”

A spokesman for Gallego said that the congressman is more focused on the House majority in 2022 and Biden’s radical agenda.

“Congressman Gallego is focused right now on passing President Biden’s infrastructure packages, ensuring Arizona’s redistricting maps are fair to the state’s entire electorate, and working to keep the Democratic House majority in 2022,” Jacques Petit, the communications director for Gallego told the Hill. “For Congressman Gallego, 2024 is about holding the White House and reminding voters which party showed up for them with solutions to grow the economy and build back better.”