New York City Mayor Bill de Blasio (D), who this year unveiled the “Key to NYC Pass,” forcing businesses to discriminate against the unvaccinated, claimed this week he generally prefers to “respect people’s intelligence” before forcing them to get vaccinated.

During Wednesday’s press briefing, a reporter asked de Blasio why he had yet to mandate coronavirus vaccinations for NYPD, FDNY, and the Correction Department.

“What’s holding you back from implementing such mandates immediately, especially given that you prevailed in court on this?” the reporter asked.

“I think everyone out there is mature adults. I’d like to respect people’s intelligence,” de Blasio claimed. “We have, I think, pretty meticulously over the course of the pandemic tried to figure out what made sense to do, when, and make sure we had all the pieces in place.”

“I do believe you sequence things in different ways. And there are still issues we have to understand better and resolve. It’s not always a matter of just push a button. You have to get things right,” he said, stating they are “looking at it right now,” and adding, “We’re looking at different options” and will have an update in coming days.

The Democrat mayor’s claim, that he prefers to “respect people’s intelligence,” follows his proud announcement of the city’s “Key to NYC Pass,” which forces certain private businesses to discriminate against the unvaccinated.

Speaking of the vaccine passport in August, de Blasio bragged about cutting off unvaccinated individuals from everyday activities. 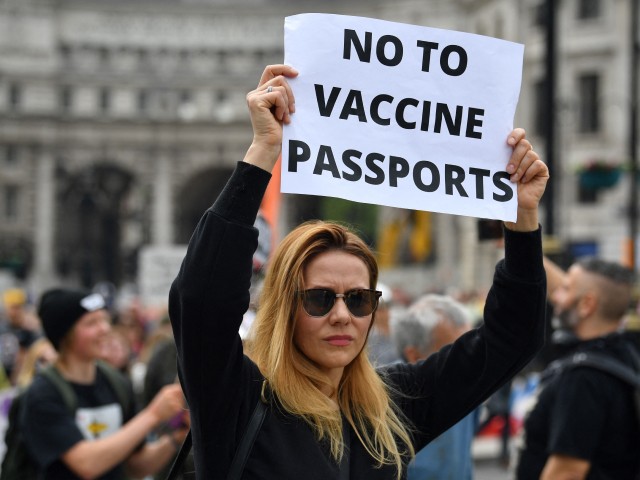 “It’s time for people to see vaccination as literally necessary to living a good and full and healthy life,” he said at the time, effectively inflicting punishment on the unvaccinated and failing to express devotion to respecting “people’s intelligence” — something he claimed to prioritize this week.

Currently, the city requires healthcare workers and Department of Education employees to be vaccinated.