President Joe Biden and his staff continue trying to sell major tax proposals to help pay for his nearly two trillion-dollar agenda – even though they claim the bill will cost zero dollars.

The cost of the Build Back Better Agenda — in terms of adding to the deficit — is zero.

It’s paid for because big corporations and the very wealthy will start paying their fair share.

Treasury Secretary Janet Yellen noted on CNN’s State of the Union on Sunday that the White House continues to work on ways to pay for Biden’s agenda. 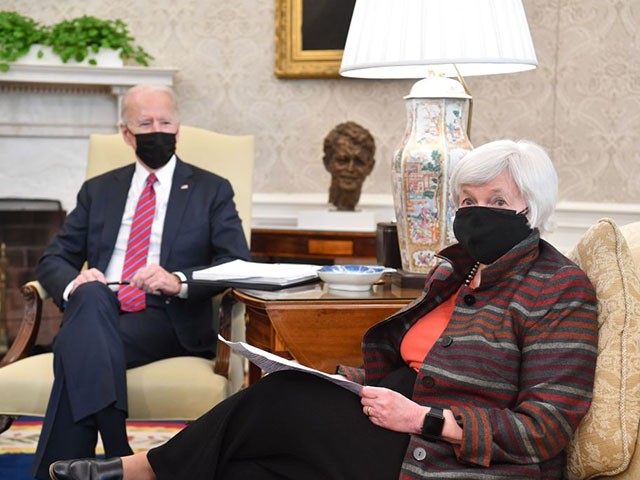 US Treasury Secretary Janet Yellen meets President Joe Biden in the Oval Office of the White House in Washington, DC, on January 29, 2021, for talks on the economy (Photo by NICHOLAS KAMM/AFP via Getty Images).

“All in all, it should be relatively straightforward to raise the revenue necessary to pay for this bill,” she said, noting that the Senate is looking at ways to tax “unrealized capital gains” and “liquid assets” owned by billionaires.

“It’s not a wealth tax, but a tax on unrealized capital gains of exceptionally wealthy individuals,” she added.

Last week while promoting his agenda in Scranton, Pennsylvania, Biden pointedly noted that he tried not to talk about the price tag because “it’s all paid for.”

During an exchange with a reporter during the daily briefing on Tuesday, White House press secretary Jen Psaki said with a straight face that Biden’s agenda would not increase the national debt by one dime:

Q Does the President still believe that Build Back Better will not add a dime to the national debt?

Q Why would he — why should Americans believe that?

MS. PSAKI: Because it won’t.

There is still no legislative text for Biden’s agenda, as Democrats continue negotiating the details of how much to spend and how to pay for it. Biden has already negotiated down from his $3.5 trillion price tag to something slightly less than $2 trillion.