Former senior Trump defense official Elbridge Colby is warning China could invade Taiwan in as little as two years, and that Taiwanese who could be at risk should consider extrication plans.

“If [Taiwan doesn’t] do anything to improve their defense capabilities, it’s going to be a matter of time before the Chinese take it over…it could happen in the next couple of years…it’s possible,” Colby told Breitbart News in a brief exclusive interview last Thursday.

His remarks came after he spoke at a national security conference where he said he has warned the Taiwanese to make plans for a Communist takeover.

“The situation is so severe that I told a couple of Taiwanese the other day that I think they’re at a point where people who would not be treated well by the Communists may need to start considering extrications, like a Hong Kong situation,” he said at Province University’s Christianity & National Security Conference on October 28 in Washington, D.C.

Since leaving the Trump administration, Colby has been raising the alarm bells on China and what he views as the Biden administration’s insufficient strategy against Beijing’s plans to become the world’s superpower.

Those plans include reunification with Taiwan, a self-ruled island and democratic government that China considers a rogue Chinese province stemming from the Chinese civil war. China has warned it will reunify Taiwan by force if necessary. China has ramped up its military exercises around Taiwan, recently sending a record number of war planes into Taiwan’s air defense identification zone.

Colby said a Chinese takeover of Taiwan has implications for Americans.

“Taiwan is sort of the canary in the coal mine because if China can pull it off against Taiwan, it wouldn’t stop there,” he said during his remarks at the conference.

“The key for China is to break apart America’s credibility as a security partner in Asia, and if it could do that by humiliating us over Taiwan, it could then repeat the operation, say against the Philippines, which is a United States ally,” he said.

“This will matter to us at home because if China’s able to attain a dominant position over this area, we are no longer going to be the center of world economic development, regulation, the currency, the dollar as the reserve currency is going to go away,” he said. 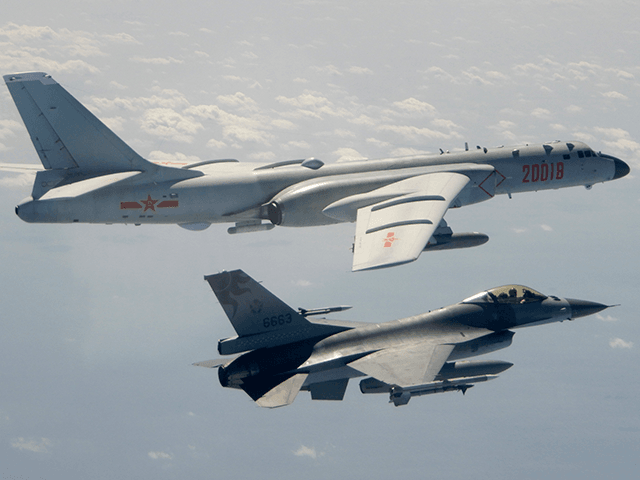 A Taiwanese Air Force F-16 in foreground flies on the flank of a Chinese People’s Liberation Army Air Force (PLAAF) H-6 bomber as it passes near Taiwan. (Republic of China Ministry of National Defense via AP, File)

“I think all Americans, whatever our view is, we should want to be able to chart our future for ourselves,” he said.

Colby told Breitbart News he does not think the Biden Pentagon is doing enough to deter China from moving militarily against Taiwan.

“I think they’re focused on China and they’re doing a lot of the right things, but there’s not the urgency and the focus on the potential for war in the relative near-term,” he said.

“According to Gen. Milley this is almost a ‘Sputnik moment.’ It’s really serious…the indications are this is not just an incremental move forward but it’s something that is a novel capability,” he said,

“I think the important thing to remember is that this is one piece of a whole set of endeavors that the Chinese are moving forward on very fast, and very capably so, and that’s the reason for real alarm,” he said.