If you want to understand just how much American political fortunes have changed over a few short months, a gander at favorability ratings will help you along.

USA Today/Suffolk is no right-wing pollster. Quite the opposite. But what it found in its polling this month is really something.

Favorability is not the same as job approval. Favorability is separate; it is more about whether or not you like or dislike someone. A good example is former President Barack Obama, whose favorability rating was usually higher than his job approval rating. This is because people liked the guy even when they disapproved of the job he was doing.

Favorability is a big deal.

Well, as we all know, thanks to a demonic and dishonest media, for more than five years, Donald Trump was pilloried as a racist devil and lunatic. This smear campaign began when he announced his intention to run for office and continues to this day with the desperate and dishonest demagoguery around January’s U.S. Capitol riot.

Trump just said what the nation is thinking. https://t.co/I9rB40GWju

On the flip-side of that, these same corporations have used their media and entertainment branches to paint Democrats as saints and heroes.

Well, lemme tell you something right now… It ain’t working.

According to the USA Today/Suffolk poll, on the issue of favorability, His Fraudulency Joe Biden is now upside-down 19 points. Nineteen! Only 39 percent of those polled view President Shart favorably, while a whopping 58 percent view him unfavorably. 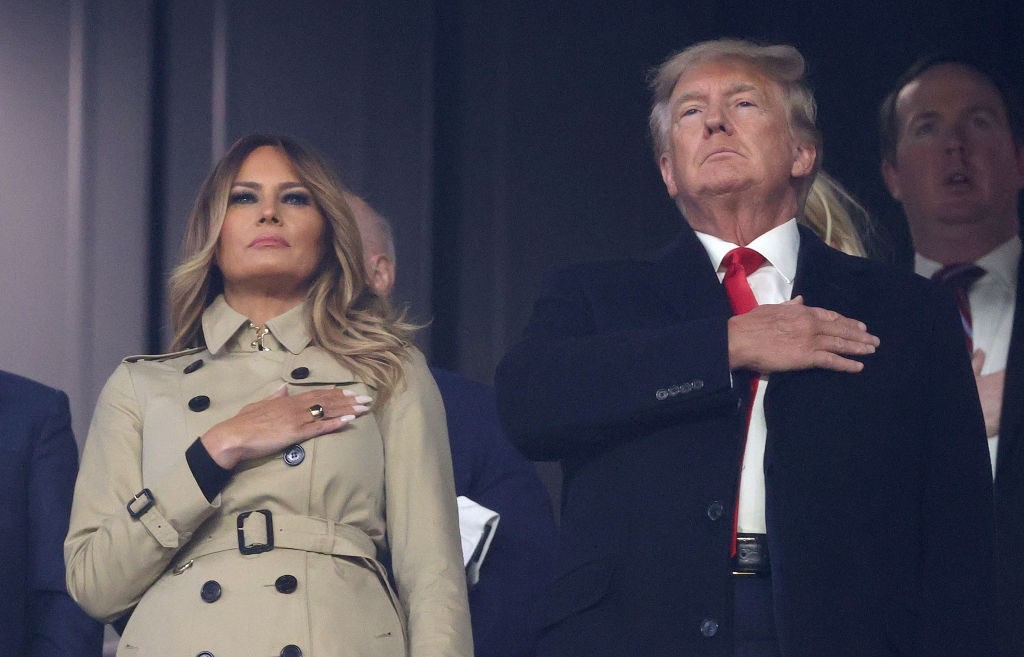 Former first lady and president of the United States Melania and Donald Trump stand for the national anthem prior to Game Four of the World Series between the Houston Astros and the Atlanta Braves Truist Park on October 30, 2021 in Atlanta, Georgia. (Elsa/Getty Images)

This same poll found just as much bad news for Her Vice Fraudulency Kamala Harris. Harris’s favorability rating currently sits at a pathetic 34 percent, while her unfavorable number sits at 53 percent. So like President Dimwit, Vice President Dimwit is upside-down by 19 points.

Trump, however, is in much better shape, with 46 percent viewing him favorably, compared to 50 percent who view him unfavorably. Moreover, he’s only upside-down by four points.

If you want a real laugh, House Speaker Nancy Pelosi (D-CA) is upside-down on this question by — this is not a typo  — 35 points. Only 29 percent view her favorably, compared to 64(!) percent who view her unfavorably.

This poll is also no fluke.

Since leaving office in January, Trump’s favorable/unfavorable rating went from an average of 38 percent favorable/58 unfavorable to 42 percent favorable/52 percent unfavorable. That’s a solid move in the right direction of ten points. Currently, on average, Trump is upside-down on this question by 9.5 points. But he’s on the rise. This also means that Trump is basically tied with Slow Joe, whose average is upside-down by  9.3 points. But he’s sinking like a rock.

Pelosi’s average is underwater by 23.5 points!

There are three takeaways from this data. The first is that Trump’s position has improved dramatically with him out of the spotlight. The second is that the corporate media’s ability to gaslight the public is no more. The third is that even with billions and billions in corporate propaganda behind him, President Poopypants is doing such a terrible job, the public now likes him a whole lot less than the guy he allegedly defeated in 2020.