“For certain troubled industries and firms that are in transition. And here what I’m thinking about is primarily coal industry and oil and gas industry,” Omarova said. 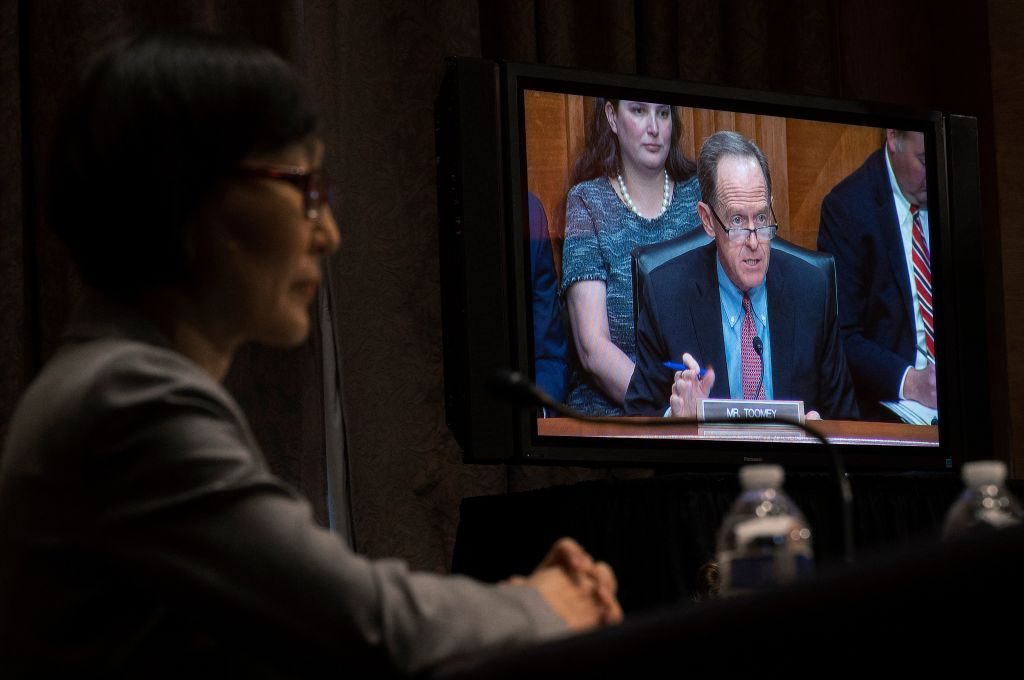 Ranking member Pat Toomey (R-PA), is seen on screen as he questions nominee to be the Comptroller of the Currency Saule Omarova (L) as she testifies before the Senate Banking, Housing and Urban Affairs Committee during a hearing on Capitol Hill in Washington, DC, on November 18, 2021. (JIM WATSON/AFP via Getty Images)

He also expressed concerns about her opposition to the 2018 Economic Growth, Regulatory Relief and Consumer Protection Act, which provided regulatory relief for small and medium-sized banks from the Dodd-Frank banking legislation.

Tester got Omarova to concede she once opposed the legislation, worrying the bill might “indirectly” help large financial institutions.

Other Democrats also said they have concerns about Omarova’s papers.

Sen. Mark Warner (D-VA) said he was “pretty disappointed” in Omarova’s critiques of Dodd-Frank relief bill, which Tester and Warner have cosponsored.

Prof. Omarova may also claim her writings are just thought experiments. But for the last decade, she’s been a consistent, forceful advocate for these radical ideas in her writings, public statements, and in testimony before Congress.

Taken in their totality, her ideas amount to a socialist manifesto for American financial services: nationalizing the banking system, putting in price controls, and creating a command-and-control economy where the government allocates resources instead of free men and women making their own decisions about the goods and services they want to buy and sell in an open market.

“These are exactly the kind of socialist ideas that have failed everywhere in the world they’ve been tried,” Toomey concluded. “In my view, Prof. Omarova’s policy views are too radical, and preserving the prosperity that our free market economy makes possible is too important, to make her our nation’s top banking regulator.”