The Florida legislature will pursue providing $1 billion in gas tax relief in the next session, Gov. Ron DeSantis (R) announced on Monday.

Speaking in Daytona, Florida, from the iconic convenience store Buc-ee’s, DeSantis laid out the negative economic state of affairs for the American people.

“We’re happy to be here. We’re not as happy at seeing what’s happening with a lot of the inflation that is going on in the economy. If you look, for example, for Thanksgiving, the price of a Thanksgiving dinner is up over 20 percent just over last year,” he said, noting that — even with raises — people are losing ground in this “inflationary economy.”

“Biden said that this was not real 6 months ago, that no serious person thought inflation was real, and actually we now know this is real. We knew then, I said it then, but now everyone acknowledges. This is really really serious,” he said, adding that it is hitting Americans in a “variety” of ways, including gas prices.

“If we were standing here a year ago in Daytona, you could get a gallon of a gas — now it’s $3.34. It’s $1.31 more than it was a year ago today just right here, and that’s really true throughout the rest of the country,” he said, noting that the supply chain crisis is only exacerbating the issue.

Because of that, the next legislative session will pursue providing over a billion dollars in gas tax relief for Florida families, “and that’s going to make a big, big, difference,” he announced.

According to the Republican governor, the average family could save $200 in a 5-6 month period with this relief. 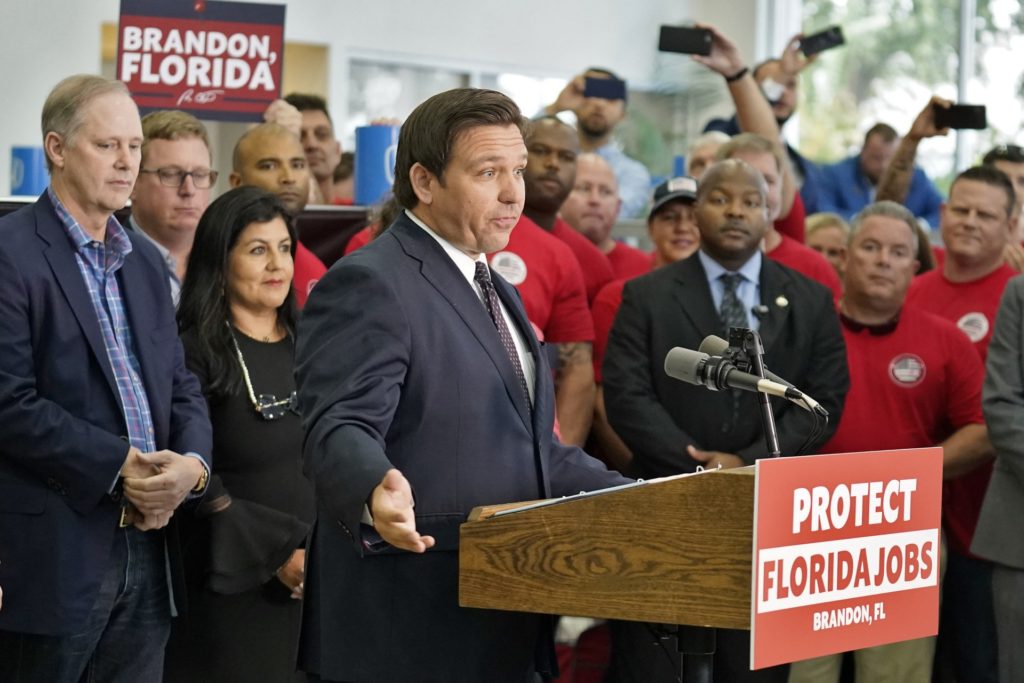 As supporter holds up a Brandon, Florida sign as Florida Gov. Ron DeSantis, center, speaks to members of the media in Brandon, Fla. Gov. DeSantis has embraced “Let’s go Brandon.” The Republican governor’s campaign said they picked the small Tampa suburb of Brandon as the place for his signing of a bill opposing White House vaccine mandates Thursday, trolling President Joe Biden by referring to what has become a popular stand-in for swearing at the president.  (AP Photo/Chris O’Meara)

While he acknowledged that many things go into the price of gas, “he said they would be “taking over 25 cents from Florida and “zero that out as long as we can.”

The state, he stressed, is in great financial shape to do so, able to help those who are “getting hammered by the rising gas prices.”

“So we’re here to do something about it,” he said, adding that companies such as Buc-ee’s and Wawa are “absolutely committed to reducing the price when we end up enacting this.”